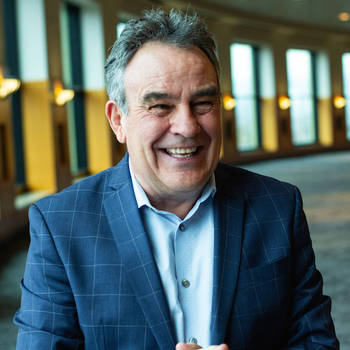 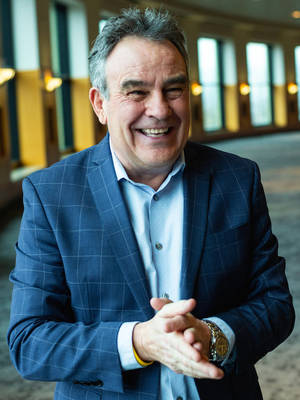 Bob Gray, now a motivational keynote speaker and memory expert, discovered his first memory technique when he was seven. He was given a magic book that showed him how to remember a twenty-item list. Shortly thereafter he was called on to 'do the memory trick' at family parties and gatherings.

Encouraged by praise at home, he began to find memory techniques could have a valuable role in other aspects of his life. With a little ingenuity, he adapted the 'memory trick' to help him with his work at school. The reward was a significant rise in his grades.

Years later, Bob immigrated to Canada from his native England. At the time he was working as an entertainer, and he had to prove to Immigration that he wasn't taking a job away from a Canadian. As the Immigration authority quickly learned, he wasn't taking a job away from anyone else in the world! Traveling and entertaining under the stage name of 'Backwards Bob the Memory Man,' Bob demonstrated the unique abilities that have netted him a place in the Guinness Book of World Records and a recent appearance on Ripley's Believe It Or Not.

For the first several years after arriving in Canada, he traveled throughout North America, appearing in Comedy Clubs, Colleges and Universities, where he demonstrated his unique abilities in front of tens of thousands of people. Soon however, he decided to take a break from the road and entered the business world. Starting in the Fitness Industry, he quickly found that by adapting the memory techniques he had been studying and developing over the years, he was able to move ahead in his career faster than he or anyone else had expected. From never losing track of detailed information, to remembering everything about his many clients, including not only their names and occupations, but also the names of their family members, their birthdays, hobbies and fitness goals, he got the job done with confidence and ease. Along with making a lot of new friends, Bob saw the sales retention of his company increase by 13% in the first year alone.

After teaching his memory techniques to his own sales staff, with highly acclaimed results, there was a phenomenal demand for him to teach his systems to other companies and organizations. At one point, he was invited to share his techniques at a national fitness convention. Because he incorporated his unique brand of humor and the incredible abilities he had developed in his stage days, his presentation was an instant success. From then on, there was no looking back. Bob was again doing what he loved. He was performing. Only this time, he also had the satisfaction of knowing that he was educating his audience as much as--if not more than--entertaining them.

A recognized authority on memory systems, Bob has spent the last twenty five years traveling the globe entertaining, keynote speaking, and training corporations, governments and associations to adapt memory systems for their particular needs. He has developed a series of sales oriented personal development keynotes and workshops, which have been popular on six continents, as well as writing the best-selling book Right Brain Rapid Recall.

When Bob is not presenting or developing his memory systems, he is an avid golfer and enjoys playing squash and blues piano. He resides outside of Toronto with his wife and their daughter who has been memorizing a list of twenty items at family parties since she was six. Bob also enjoys setting new records for the people at Guinness, and is currently training himself for 'Speed Calendar Memorization,' another mental feat he is happy to teach to interested parties.

His many TV appearances include, 'Ripley's Believe It Or Not,' The Steve Harvey Show, ABC Regis Philbin, NBC Today Show, CBC, and Britain's BBC 1.

"When delegates willingly and even enthusiastically pull themselves out of bed to attend a 7.30am follow-up seminar with Bob, having attended a very late night networking event the night before, you know you've employed a great speaker. We first hired Bob for our Congress in Rhodes, Greece, and the evaluations were so high that we immediately brought him back for our next event in Thailand. Knowing we'd have a lot of first timers at this year's Congress in Florence we again turned to Bob and once again he astounded and motivated our delegates to unlock the potential of their own memory power. We attracted delegates from 71 countries this year, so Bob's ability to communicate across cultures, age groups and business backgrounds is invaluable. All you need to supply him with is a "White Board" and some chunky marker pens, and you've got a fantastic delegate experience lined up and ready to go! It also helps that he's one of the nicest blokes to have around at an event even when he's not on stage."
--ICCA

"This year I have attended three state dental conventions, besides the national one in San Francisco. I have also attended at least twenty other days of multi-faceted lectures this past year. Each lecture series I have attended has lasted from three to nine hours and I honestly have to say that your lecture was number one among all of those lectures. Many, many thanks."
--American Dental Association

"As you know, this was the first year that we had moved away from "pure" travel to a structured seminar format. As the first speaker, your mix of humour and ability to "teach" your memory systems in a relaxed informative way, was absolutely the best way to indoctrinate our participants to the new format. You will be pleased to know that over 90% of the participants rated you at the high end in interest, and over 95% rated you at the high end on content. Along with this survey, we had a deluge of positive comments and rave reviews. It was so totally unique; that our participants were still talking about it long after your presentation was completed."
--General Motors

"I wanted to let you know how much your 90-minute presentation meant to our conference. We are a marketing group that really needs to know the techniques to remember names, dates and lots of numbers. Your technique to teach a much-needed skill was fun and educational. You have a real ability to hold the crowd and keep them wanting more."
--Du Pont

"Your presentation was extremely entertaining and one of the most educational business seminars we have experienced. The Account Managers have all responded enthusiastically to their newfound abilities pertaining to recall of names and faces. Our Vice President of marketing was right on the money when he suggested that "this training should have been mandatory before the Account Manager's received their personal computers!"
--Kodak