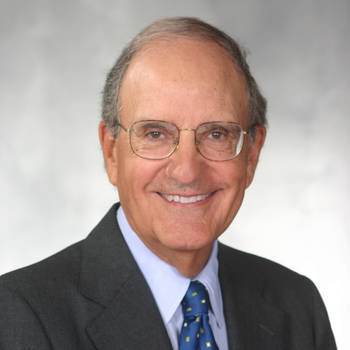 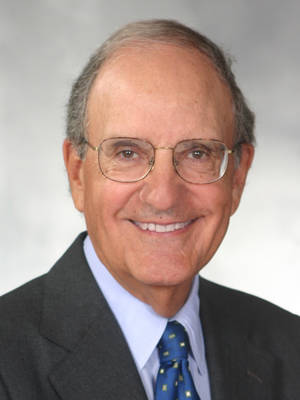 George J. Mitchell served as US Special Envoy for Middle East Peace from January 2009 to May 2011.

Prior to that he had a distinguished career in public service. He was appointed to the United States Senate in 1980 to complete the unexpired term of Senator Edmund S. Muskie, who resigned to become Secretary of State. He was elected to a full term in the Senate in 1982 in a stunning come-from-behind victory. After trailing in public opinion polls by 36 points, Senator Mitchell rallied to win the election, receiving 61 percent of the votes cast. Senator Mitchell went on to an illustrious career in the Senate spanning 15 years.

In 1988, he was reelected with 81 percent of the vote, the largest margin in Maine history. He left the Senate in 1995 as the Senate majority leader, a position he had held since January 1989.

Senator Mitchell enjoyed bipartisan respect during his tenure. It has been said "there is not a man, woman or child in the Capitol who does not trust George Mitchell." For six consecutive years he was voted "the most respected member" of the Senate by a bipartisan group of senior congressional aides.

While in the Senate, Senator Mitchell served on the Finance, Veterans Affairs, and Environment and Public Works Committees. He led the successful 1990 reauthorization of the Clean Air Act, including new controls on acid rain toxins. He was the author of the first national oil spill prevention and cleanup law. Senator Mitchell led the Senate to passage of the nation's first child care bill and was principal author of the low-income housing tax credit program. He was instrumental in the passage of the Americans with Disabilities Act, landmark legislation extending civil rights protections to the disabled. Senator Mitchell's efforts led to the passage of a higher education bill that expanded opportunities for millions of Americans. He was a leader in opening markets to trade and led the Senate to ratification of the North American Free Trade Agreement and creation of the World Trade Organization.

Senator Mitchell received an undergraduate degree from Bowdoin College and a law degree from the Georgetown University Law Center. He served in Berlin, Germany, as an officer in the US Army Counter-Intelligence Corps from 1954 to 1956. From 1960 to 1962 he was a trial lawyer in the Justice Department in Washington, DC. From 1962 to 1965 he served as executive assistant to Senator Edmund S. Muskie. In 1965 he returned to Maine where he engaged in the private practice of law in Portland until 1977. He was then appointed US attorney for Maine, a position he held until 1979, when he was appointed US District Judge for Maine. He resigned that position in 1980 to accept appointment to the US Senate.

In 1995, he served as a Special Advisor to President William J. Clinton on Ireland, and from 1996 to 2000 he served as the Independent Chairman of the Northern Ireland Peace Talks. Under his leadership, the Good Friday Agreement, an historic accord ending decades of conflict, was agreed to by the governments of Ireland and the United Kingdom and the political parties of Northern Ireland. For his service in Northern Ireland Senator Mitchell received numerous awards and honors, including the Presidential Medal of Freedom, the highest civilian honor given by the US government; the Philadelphia Liberty Medal; the Truman Institute Peace Prize; and the United Nations (UNESCO) Peace Prize.

In 2000 and 2001, at the request of President Clinton, Prime Minister Ehud Barak, and Chairman Yasser Arafat, Senator Mitchell served as Chairman of an International Fact-Finding Committee on violence in the Middle East. The Committee's recommendation, widely known as The Mitchell Report, was endorsed by the Bush Administration, the European Union and by many other governments.

In 2006 and 2007 he led the investigation into the use of performance-enhancing drugs in Major League Baseball. He also served as Chairman of the Special Commission Investigating Allegations of Impropriety in the Bidding Process for the Olympic Games and was the Independent Overseer of the American Red Cross Liberty Fund, which provided relief for September 11 attack victims and their families.

In 2008, TIME magazine named Senator Mitchell one of the 100 most influential persons in the world.