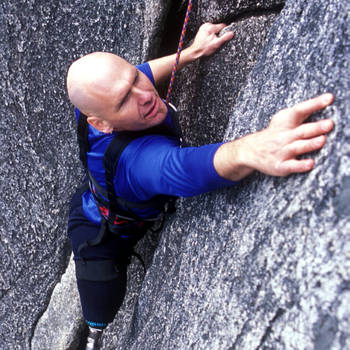 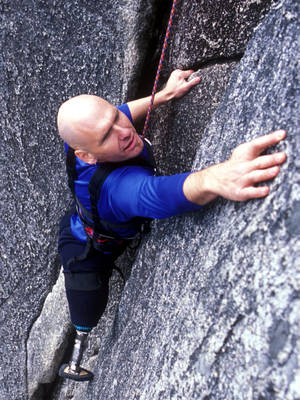 Warren Macdonald's life's boundaries were redefined in April 1997 with his accident on North Queensland's (Australia) Hinchinbrook Island. Climbing to the Islands tallest peak, he became trapped beneath a one-ton slab boulder in a freak rock fall. Two days later he was rescued, only to undergo the amputation of both legs at mid thigh.

Just ten months later, he climbed Tasmania's Cradle Mountain using a modified wheelchair and the seat of his pants.

In February 2003, he became the first double above-knee amputee to reach the summit of Africa's tallest peak, Mt Kilimanjaro (19,222ft), and more recently, in a spectacular effort requiring more than 2800 pull-ups over 4 days, created history once again in an ascent of America's tallest cliff face, El Capitan. He is also the only above knee amputee to make an ascent of Canada's landmark frozen waterfall, the 600 ft "Weeping Wall" in Alberta.

Warren's first book, "A Test of Will" is an Australian bestseller and the subject of the "Trapped under a Boulder" episode of the Discovery Channel series "I Shouldn't Be Alive". His film documenting the epic four-week journey to Federation Peak, Australia most challenging mountain summit, "The Second Step" has been acclaimed worldwide, screening on National Geographic Television and winning eight international awards including Grand Prize at the prestigious "Banff Mountain Film Festival".

Warren has appeared on numerous news and current affairs programs, including "Larry King Live", "The Oprah Winfrey Show", and The Hour with George Strouboulopoulos.

He lives in Canmore, Alberta with his partner Margo Talbot.