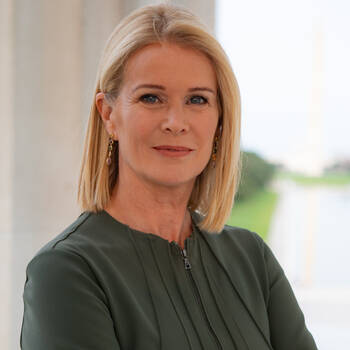 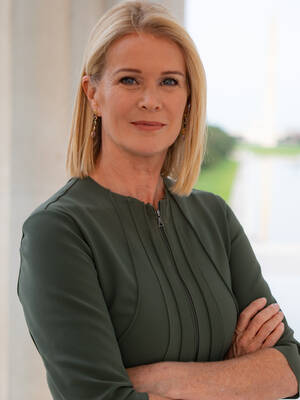 Katty Kay is an award-winning journalist whose instinctively global perspective on American politics and global affairs comes from having lived and worked in the Middle East, South Africa, Japan, Europe, and the U.S. throughout her career. Now Washington-based, Katty has been with the BBC for nearly 30 years as a reporter and lead anchor, reporting on six U.S. presidential elections, Washington politics, financial crashes, world trouble spots, sex scandals, global affairs, and much more. She is currently U.S. special correspondent for BBC Studios - where she hosts TV documentaries from both the U.S. and Europe, presents her own podcast series, and writes a weekly column. Katty is a regular contributor and substitute host of Morning Joe on MSNBC and also writes on the art and science of self-assurance in women and girls. She is co-author, with Claire Shipman, of four New York Times' bestselling books: Womenomics, The Confidence Code, The Confidence Code for Girls, and Living the Confidence Code. Katty is an engaging keynote speaker on a wide range of topics as well as a brilliant moderator, interviewer, and event host.

Helping women turn thoughts into action and master a more confident mindset is one of Katty's passions. She is co-author of five books with Claire Shipman, including four New York Times bestsellers - two were #1. Their first two bestsellers focus on women, success, and work. Womenomics: Write Your Own Rules for Success examined the workplace revolution and inspired women to take control, dream big and discover a different way of weaving work into their lives - and in the process create more profitable companies with happier and more productive employees. They followed up with The Confidence Code: The Science and Art of Self-Assurance--What Women Should Know, which inspired women to understand that confidence - the lynchpin of success - is a choice.

After The Confidence Code was released, parents everywhere asked about confidence and girls. That led to three more books co-authored by Katty with Claire Shipman and JillEllyn Riley. The Confidence Code for Girls: Taking Risks, Messing Up, and Becoming Your Amazingly Imperfect, Totally Powerful Self, was released in April 2018 and debuted at the #1 spot on The New York Times bestseller list. The empowering, entertaining guide gives girls the essential yet elusive code to becoming bold, brave, and fearless. The follow-up, The Confidence Code for Girls Journal: A Guide to Embracing Your Amazingly Imperfect, Totally Powerful Self, is based on their in-depth research and helps teens and tweens tackle any challenge. Their most recent book, Living the Confidence Code: Real Girls, Real Stories, Real Confidence, debuted at #1 on The New York Times bestseller list (Children's Middle Grade) and is a collection of 30 true stories of real girls pursuing their passions, struggling and stumbling, but along the way figuring out how to build their own special brand of confidence. Katty and Claire are currently co-authoring their sixth book and have plans to launch a podcast.

On the fun side, Katty had the distinction of being immortalized in pop culture in 2018 when her name was the answer to a question on the Jeopardy game show. In the same week, she was portrayed in a skit on Saturday Night Live which satirized a moment from MSNBC's Morning Joe program.

Katty Kay settled in Washington, DC in the mid-90s where she lives with her husband, two cats, and a dog. They have four grown children.