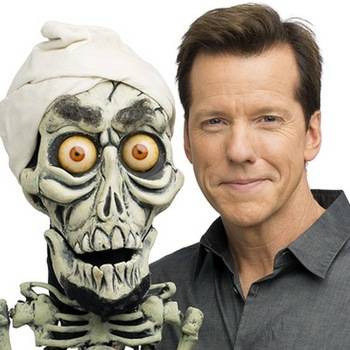 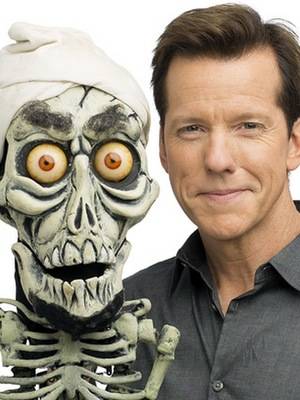 Breathing life into an elderly curmudgeon or a purple human-like creature from the Micronesian islands, or even a self-effacing, talking jalapeno-on-a-stick, Jeff Dunham is straight man to some of the funniest partners in show business. He has amassed legions of loyal fans throughout the United States and abroad with thousands of sold-out theater and comedy club performances, countless television guest spots--including numerous Tonight Show appearances with both Leno and Carson--and with two top-rated specials on Comedy Central. He continues to win great accolades and success for one simple reason: He and his buddies are funny as hell. Oh, and by the way...Jeff Dunham is a ventriloquist.

Dunham's comedic skill, impeccable technique and sleight of hand make him a master of his craft. In fact, audiences often forget there is a person behind the puppets. "What makes this performer the best at what he does is the believability factor," one reviewer wrote. "Dunham's characters have more personality than a lot of people I know."

His talent has parlayed him to the top of his game with multiple critical achievements and television appearances, including a recent profile on CBS's "60 Minutes II." The comic was interviewed by correspondent and actress Candice Bergen, daughter of the legendary ventriloquist Edgar Bergen. Between jokes and laughs, Ms. Bergen called Dunham "...flat out FUNNY!"

Dunham was also voted "Funniest Male Stand-Up Comic" at the American Comedy Awards, an honor shared with the likes of Jerry Seinfeld, Jeff Foxworthy and Robin Williams. Additionally, viewers recently voted Dunham to third place (for the second time in two years!) in Comedy Central's "Standup Showdown." The comedian and his grumpy old-man partner, Walter, has made several appearances on Fox Sports Net's "Best Damn Sports Show," and they've been featured on such television shows as "Hollywood Squares," "Entertainment Tonight," and "Good Morning America." Also, in a near-legendary television appearance, Dunham and Walter brought the house down with a sketch on an episode of the WB's "Blue Collar TV."

Dunham is a true veteran of the comedic stage, and has more than honed his craft: Performing 40 weeks and 250 dates a year in concert venues, comedy clubs and countless private corporate appearances, he is one of the most sought-after entertainers working today. While he has never held a "real job," he has compiled an impressive resume: He is the only person ever to win the prestigious "Ventriloquist of the Year" award twice, and he was recently nominated "Comedian of the Year" by the TNN Music City News Country Awards.

Jeff Dunham's seemingly most significant stamps of approval, however, will always be when Johnny Carson invited the ventriloquist to the couch on his very first "Tonight Show" appearance. This is an honor Dunham shares with only four other comedians during Carson's 30-year tenure. An extraordinary comedy moment erupted when Walter had the audacity to respond to Carson's invitation for another appearance with "It'll be a cold day in hell before I come back here." Carson laughed heartily, the audience howled, and the young comedian's career was launched to a new level. And a side note: Dunham has appeared on the "Tonight Show" more than any ventriloquist in history.

Anyone who has experienced an evening with Dunham knows, however, that the real stars of the show are his partners in comedy, and it's the humor and the believability of his characters, Peanut, Walter and Jose Jalapeno...on a STEEK! that endears them to audiences everywhere. Recently joining the roster and adding even more spark to Dunham's menagerie are two new co-stars: First, there's Sweet Daddy Dee, he's the new showbiz manager of the bunch, wearing more bling than Snoop Dogg, and keeping Dunham confused with his street-savvy and hip hop talk. On the other end of the spectrum is Bubba J, white trash and buck-toothed, he makes NASCAR his second religion.

With material suited and customized for the audience at hand, Dunham's fans range the gamut: From bikers to surgeons, singles to families, young to old, and hip to geek, people return over and over, year after year to see the antics of one man who seems like many. And Dunham's characters are so vivid and memorable that the comedian usually opens with ten minutes of his own solo stand-up, simply to establish himself as the hub of the wheel. "If people walk away thinking, 'Those guys are FUNNY,' rather than "He was a great ventriloquist,' then I've done my job," says Dunham.