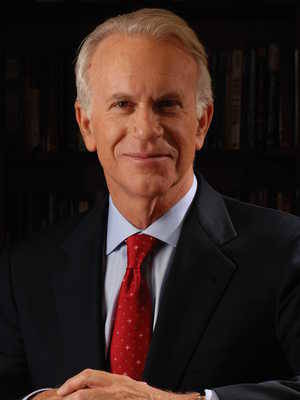 Ambassador Glassman's career spans politics, technology, media, economics, diplomacy, business, and academia. Drawing on his knowledge of all these areas, he generally speaks on "What's Ahead for the Economy and Politics."

Because of his background as moderator of three TV programs, he is a gifted on-stage interviewer. His interview subjects have ranged the Dalai Lama to Silicon Valley's Peter Thiel to the CEO of Credit Suisse.

Ambassador Glassman served as Under Secretary of State for Public Diplomacy and Public Affairs from 2008-09, leading the government-wide strategic communications effort. During 2007-08, he was Chairman of the U.S. Broadcasting Board of Governors, which oversees Voice of America and other government-sponsored TV, radio, and Internet broadcasting. He was confirmed unanimously by the U.S. Senate for both his government positions.

Since 1996, he has been a fellow at the American Enterprise Institute, where he specializes in Internet policy. From 2009 to 2013, he served as the Founding Executive Director of the George W. Bush Institute, the policy arm of the Bush Presidential Center in Dallas. He recently ended a three-year term as a member of the Investor Advisory Committee of the U.S. Securities and Exchange Commission.

Ambassador Glassman has had a long career in media. He was host of three weekly public-affairs programs - one on CNN ("Capital Gang Sunday") and two on PBS. He was Editor-in-chief and co-owner of Roll Call, President of the Atlantic Monthly, Publisher of the New Republic, Executive Vice President of U.S.News & World Report, and chief investment writer for the Washington Post.

He is currently chairman of Glassman Advisory, a Washington public-affairs consulting firm.

Over the past 15 years, he has written more than 2,000 articles - on economics, finance, technology, and foreign policy -- for such publications as the New York Times, Wall Street Journal, Washington Post, Forbes, and Los Angeles Times. He is the author of three books on investing and has spoken at some of the world's most important forums, including the National Press Club (Washington), the Detroit Economic Club, and Chatham House (London).