The First Caucasian Harlem Globetrotter in over 60 years 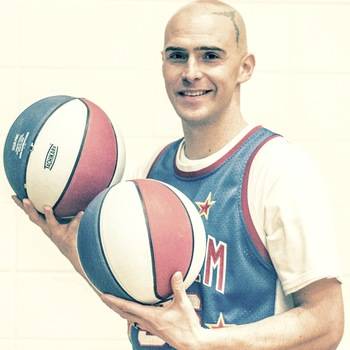 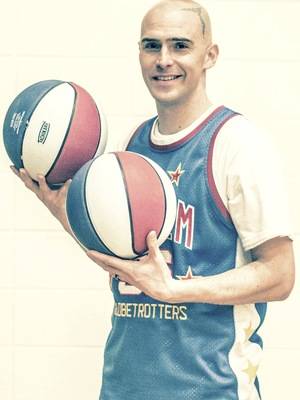 It's a story with so many plot twists it's almost unbelievable.

Seth Franco became the first Caucasian Harlem Globetrotter since 1942. That's the part that captures everyone's attention. But that's not the interesting part of the story.

Seth, who played basketball at a small Christian school on Long Island, moved with his family to Brooklyn. He enrolled for his sophomore year at Abraham Lincoln High School - the school from which Stephon Marbury, currently of the New York Knicks, graduated. In fact, when Seth enrolled at Abraham Lincoln, Marbury was a senior.

Abraham Lincoln was a tough school, and Seth, a Caucasian, was a definite minority. In fact, the coach at Abraham Lincoln took one look at Seth and said to Seth's father, "If your son wants to play basketball, he should probably go to a different school."

But Seth was used to being underestimated. He was rail thin. At the time he was short. And no one knew how good he was at one thing - handling a basketball.
Seth made the junior varsity team as the starting point guard.

The next year his family moved back to Long Island and Seth finished his high school career in a small Christian school, enrolling at Nyack Christian College in Manhattan.

Like most kids, Seth had his heart set on a career in the NBA.

But that's not how this story plays out.

Injured in his junior year, the result of improper bone structure in his hip, Seth left Nyack, his dreams shattered.

He joined the Richmond Outreach Center, in Richmond, Virginia, and developed a basketball program for inner-city kids, operating out of a warehouse.
The little program grew in popularity and gained attention. The Court Jesters, a basketball entertainment group, discovered Seth, used him in some of their engagements, and put his picture on their website. In fact, Seth's picture is still on their website (www.cjesters.com)

Here's where the story takes a most interesting turn.

Discouraged, Seth went to find himself. His dreams were lying broken at his feet, his hip was sore, and life simply was not turning out the way he had envisioned.

He went to IHOP - The International House of Prayer in Kansas City. For three months he did nothing but pray and study and read and wait and listen, trying to find direction for his life.

During the time he isolated himself, Universal Studios began casting a projected movie, Rucker Park. It was to be the story of the legendary park of the same name in New York City - the place the pros go to get their street credibility. Even Wilt Chamberlain had played there.
Directed by Malcolm Lee, the movie was to be about a white kid going into Rucker Park, overcoming the odds, and coming out on top.

So the people of Universal Studios went scouring the city, looking for a white kid with extraordinary skills. They looked on the website of the Court Jesters. There they found Seth.

Universal Studios called Seth's home. But Seth, in going to Kansas City to find himself, had chosen to cut himself off from everything. He had no phone. He had only called home one time - using a friend's cell phone.
His parents, being loving and concerned as parents are, saved the number. When Universal Studios called, Seth's parents tried the only number they had for him - the cell phone of his friend.
When they called, Seth was right there, and was on the next plane back to New York.
He walked into the tryout, not having practiced for three months. He had spent most of his days in prayer, and his diet had consisted primarily of what he could find at food drives.

But this story is about the unexpected.

In a tryout where none of the pros had made it past the first round, Seth took over. By the end of the night, he was center court, dribbling with two balls, as the cameras circled him while 100 other guys who were there to try out simply stood and watched. Malcolm Lee had his white basketball player. Kenny Smith, NBA player and talent judge for the movie, was impressed.

"I was totally out of shape," Seth says. "I hadn't even picked up a basketball for three months. There's no way I should have been sharp. But I was right on point. It was a dream come true."

And if the story were to end there, it would be intriguing enough. But there's so much more.

The movie plans fell through. Rucker Park still sits as a project at Universal Studios. And if the project ever comes to completion, Seth will still have the role. But for now, it's a dead end.
Such a painful twist to the story. Seth, with shattered dreams, goes to find himself. His parents almost unbelievably contact him when Universal Studios calls. Seth miraculously wins the role. Everything is looking so good. Dreams do come true.

But then the dream is deflated - again.

However the story continues.

The Harlem Wizards, another basketball entertainment group, had been at the casting call for the movie. They had seen Seth, and they liked him. In the meantime, Seth had moved back to New York, almost at the whim of a buddy. Seth had been contemplating moving back, but didn't know where he would stay, when a friend called and almost jokingly said, "Hey, how 'bout coming to live with me?"

For two months he played with the Wizards, and was about ready to sign a contract with them. It looked like everything was coming together.

Every story needs a hurricane, and this one is no different. Just as Seth was to ink his contract, the hurricane hit, knocking out all communication.

10 days into the tryout, Seth was discouraged. His leg was in so much pain he wanted to quit. In fact, that's what he did. Or at least that's what he decided to do.
He went to find the coach to withdraw from the tryout, but, of course, the coach was nowhere to be found. Seth went back to his room, stayed with it, and became the first white Harlem Globetrotter in over 60 years.

A happy ending to the story?

Not in the way you'd expect.

Seth played with the Globetrotters through their U.S. tour, but left during their European tour. His leg simply wouldn't hold up.
So Seth is doing what he feels he's always been called to do - serve God wherever he can.
In the 7th grade, Seth had written an essay saying he wanted to be a basketball player and a preacher.

"Whenever God places you somewhere you can find the grace and strength to be effective right there", says Seth. "The Globetrotters were not an end, but a stepping stone to what God has in mind for me."

Now you'll find Seth in front of kids, dribbling and speaking. He impresses them with his basketball skills and then shares his heart. His message is simple and yet profound. "The most important things in life," he says to the kids, "are the decisions you make every day. True success comes not from what you do with the talents you have but with the choices you make every day to do the right thing."

"God will take your talents and throw you into places you could never go on your own."

There's so much more to Seth's story. His grandfather who was cured of cancer. His trips with his father to feed the homeless in Brooklyn every Monday night - experiences that Seth wouldn't trade for anything - not even his stint with the Globetrotters. His wife, Sarah, who had a detached retina and received a 100% discount from the hospital.

And the story is far from ended.

"God is simply walking me through," Seth says. "And the cry of my heart is that I want my life marked by the fact I'm sharing what God has brought me through."
Look closely at Seth and you'll see tattoos - except these are different. They are Bible passages - three of them - which Seth has prayed over himself for years. Psalm 23: \1 - "The Lord is my Shepherd"; Matthew 5:6 - "Blessed are those who hunger and thirst after righteousness"; and 2 Timothy 1:7 - "God did not give us a spirit of timidity, but a spirit of power and love and self discipline."

It's quite a story. And if you ask Seth, it's not a story about him.

It's a story about how God is at work.