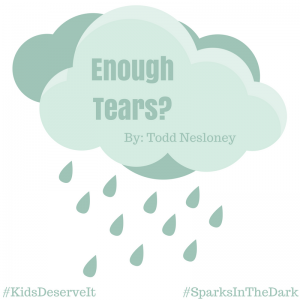 If there’s one thing I’ve learned, to depth of my core, about being in education, it’s how deeply we get connected to our students and how much of what goes in their little lives, affect ours.

When I was deciding what I wanted to do with my life and the career path I wanted to take, I was sure I was going to be a social worker.  I knew I loved working with kids and I wanted to pursue a career that would allow me to connect with those most broken and maybe help make their lives become a little better.  Once I got into looking into what all is involved with social work, I quickly learned that it wasn’t the career path for me.  Why? Because empathy is a big part of who I am.  I connect with others on a deeper emotional level and can quickly find myself consumed by the pain of others, while all but ignoring my own.  I knew if I went into social work I’d never be able to separate their pain from my own and I would be all but taken over by it.

So what did I decide to do instead? Be a teacher of course! I figured teaching was that path that would still allow me to connect with kids, educate them, and change their lives! And I assured myself that unlike social work, teaching would allow me to bond with my kids without allowing their heartbreaks to consume me.

Boy was I wrong.

As a teacher, I quickly learned that when you truly care about your students, their stories become part of you. Their tears become tears you also shed. Their heartaches become the nightmares that keep you up at night or the worries that keep you from falling asleep.

And as a principal it only got worse.  My first year as a principal I was emotionally overwhelmed with the stories of heartache I came across.  Homelessness, abuse, neglect, suicide, self-hatred, drugs, alcohol, gangs.  Oh, and all at an elementary school.

There have been countless times I’ve closed the door to my office or classroom (or sat with members of my team) and just cried.  For the child who was dragged screaming out of school because his father (whom he didn’t want to live with) now had custody and was enrolling him somewhere else.  For the child who CPS and the police showed up to protect because she had been sexually abused by her uncle and then burned with cigarettes.  For the young girl who didn’t show up for school, but her friends said she posted suicide thoughts on instagram the night before, and we had to rush to her home when no one would answer the phone.  For the little boy who came in crying every morning because every day when he would get ready for school his mother told him he was stupid and no one wanted him, and he had begun to believe it. For the 4th grader who broke down in our arms for over an hour because on the way to school her car had been pulled over and her father had been arrested due to an outstanding warrant. For the young man, who sat with his head on his desk overcome by worry because he had seen his President on tv say that they were going to send back all the dangerous illegals, and his father hadn’t yet gotten his citizenship. And even for the teacher who came to school three days after suffering a miscarriage, or losing their child in a horrific accident, or finding out that cancer had overtaken their bodies.

And I’m reminded time and time again that it’s not just me.  When I reach out to friends like principal Lindsy Stumpenhorst and hear about her heart feeling like it’s ripped out of her when a student she’s been working with and is finally making some huge gains with, has to unexpectedly move.  Or a story from teacher Jordan Potrzeba who talks about the one boy he has worked with, tried to bond with, and still can’t get him to understand his worth.  Or from teacher Travis Crowder, who shares about the young man he personally spends one on one time with every day in class, only to feel like he’s getting no where. Or from principal Lynn Colon, who shares about working with students where deportation is a constant fear for many of them or their family members.  Or from principal Steven Lamkin, who shares about the trial and trauma of a staff member’s family and it breaks him to the core.

Their stories are all our stories.

And sometimes I wonder, do we have enough tears? When the droplets seem to pour from our eyes like a fire hydrant that’s been broken open, and we can’t make them stop. When the sobbing causes our entire body to shutter.  When the worry overtakes us and keeps us up at night or ulcers to form in our stomachs.  Or we rush to school, praying and praying, that he shows up again today and that he wasn’t beaten too bad last night.

Are there enough tears left in us for the brokenness?

And that’s when I’m reminded that there are. There are enough tears.  Even when we think our ducts might have run dry. Why? Because we’re educators. We don’t run from the pain. We don’t hide our eyes from the injustices. We don’t withhold love from the broken.

We show up. We push through the pain, buy clothes when they need it, put lunch money in a child’s account that we don’t even know, bake cookies when you know her mom won’t bring them for her birthday, sit with them at lunch when no one else will, stop by their baseball game because they asked you to, and that’s only the tip of the iceberg.

So are there enough tears? You betcha there are. Because that’s what educators do, we laugh, get upset, celebrate, and even cry over our kids. Because they’re all our children.

Want Todd Nesloney for your next event?

February 14, 2018
If there's one thing I've learned, to depth of my core, about being in education, it's how deeply we get connected to our ...
Read more

February 08, 2018
Listen to the Episode HERE! Leadership in Education Rick was going through his Twitter feed and found the ...
Read more

If there's one thing I've learned, to depth of my core, about being in education, it's how deeply we get connected to our students and how much of what goes in their little lives, affect ours. When I was deciding what I wanted to do with my life and the career path I wanted to take, I was sure I was going to be a social worker. I knew...
Read More

Listen to the Episode HERE! Leadership in Education Rick was going through his Twitter feed and found the hashtag #leadupchat which lead him to his guest through his hashtag #KidsDeserveIt. Rick contacted Mike Stephens, to hunt down Todd Nesloney, creator of the hashtag and movement for this very special interview and show. We are blessed ...
Read More

By Rebecca Fiedler rebecca.fiedler@theeagle.com Texas A&amp;M graduate Todd Nesloney, who has served as principal at Webb Elementary for four years, didn't just get book contributions from teachers, but also the school librarian, secretary, school nurse and others in the educational system. While there are stories about experiences t...
Read More

Today we'd like to introduce you to Todd Nesloney. After forming a friendship over social media, Todd and Adam finally met face to face at the National Association of Elementary School Principals (NAESP) Conference in Long Beach, California in July of 2015. After forming a friendship through twitter and then meeting face to face at the...
Read More

This post was co-written withJeff Veal. You can check out his bloghere. The Way It May Seem It seems these days that you can't turn on the tv, radio, or surf the web without bearing witness to another atrocity that has happened around the world. Sometimes those events are far away and easy to disconnect from, yet sometimes they happen ...
Read More

Todd Nesloney spent years and years diligently working his way up to Principal/Lead Learner at Webb Elementary School. He was eventually awarded Bammy's Principal of the Year as well as Teacher of the Year for his amazing example of innovation in the classroom. Since the recent release of the book Kids Deserve It!, which he co-wrote with his fri...
Read More

Book Launch | 'Kids Deserve It' Has Officially Hit the Shelves!

Congratulations to Premiere Exclusive Todd Nesloney on the release of his brand new book Kids Deserve It! Principal/lead learner and two-time Bammy Award recipient co-wrote the book with Principal and ASCA Principal of the Year, Adam Welcome. Todd and Adam met face to face at an NAESP conference and learned that they had similar visions fo...
Read More

So I'm in the middle of something that has already become a game changer for me (and hopefully my team too!)Coming back from the holiday break I really wanted to get some one-on-one face time with each of my team members. I wanted to spend more time listening to them and hearing them. Now, my team has 80 members, so it was going to be no small u...
Read More

White House Champion of Change, Lead Learner/Principal and brand new Premiere ExclusiveTodd Nesloneyknows exactly what it means to lead by example. His leadership role in education ranges from writing a children's book and co-authoring classroom improvement guides to being a resourcefor educators and students alike on how to most effectively u...
Read More