Team Hoyt Motto - "YES YOU CAN" 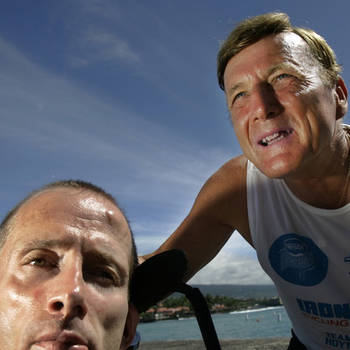 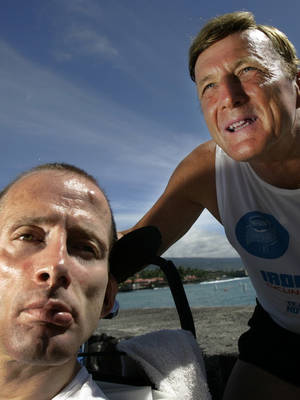 Together- You Can Do Anything!

Rick Hoyt uses a wheelchair. That has not stopped him from living a very full and amazing life. He, along with his dad, Dick, have formed "Team Hoyt" and they have competed around the world doing marathons and triathlons.

The Hoyts have competed in over 1100 athletic events in the last 37 years. They have run in 72 marathons - 32 of them being the Boston Marathon. They have also completed in 257 triathlons, 6 of them being Ironman distance events.

Dick, 75, is a retired Lt. Colonel, having served in the military for 35 years. Rick, 54, is a graduate of Boston University with a degree in Special Education.

Rick was born in 1962 as a spastic quadriplegic with cerebral palsy and as a non-speaking person - but despite these disabilities, Rick's mind and spirit have always been strong. His family supported his quest for independence and inclusion in community, sports, education and the workplace, culminating with his graduation from Boston University.

Dick travels the country doing corporate and community presentations, educating the public about disability awareness and promoting the Team Hoyt motto, "Yes You Can". Through his presentation, Dick shares his lifelong commitment to changing attitudes and educating others on the world of disabilities. He and his family have seen an impact from their efforts in the area of public attitude toward people with disabilities.

You may visit their website at www.teamhoyt.com to learn more about their story and see many pictures of their journey through their 37 years of racing.