You would think with the resume of Joe Biden you'd be embraced by your own party. This ain't Joe's party any longer. It's the party of Alexandria Ocasio-Cortez and Ilhan Omar. You wonder why the Democrats aren't rushing to Joe's defense over accusations of inappropriate touching? The truth is the socialist wing of the Democrat Party is behind the political assassination of Joe Biden.
Anvil Joe is what we call him. He's so gaffe-prone that he tends to be an anvil tied to the neck of the Democrats. And they know it. That's another reason he must be dispensed of. That and he's an old white guy. He even apologized on behalf of old white guys like himself. Didn't matter. Trying to distance yourself from who you are is impossible. So Joe must go away. 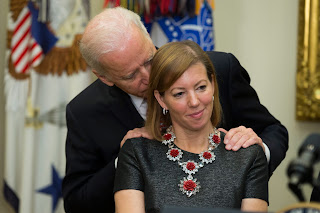 But he's not. He's polling at the top of the contenders for the nomination in practically every poll. Not good. Not if you're a socialist Democrat, which is rather redundant these days. Try as he may Joe's just out of step with his own party. It left him in the dust in its race to be Venezuela.
Anvil Joe has his own problems, however. Creepy Joe is what some call him. He apparently has a shampoo fetish. He's a close talker. He loves to hug. He loves to whisper in women's ears. Nothing I've seen rises to sexual assault, but that's how it's being portrayed by his accusers. Lucy Flores, a Nevada state legislator, says ole Joe inappropriately touched her at a campaign event in 2014. Curious how she's just coming out now, but she says she'd still vote for Joe over Trump. Apparently she's not that shaken up over the "inappropriate touching." That or she's willing to take one for the team in order to defeat Trump.
What's telling is how the mainstream media have jumped on Joe like a pack of coyotes. They see AOC and her legion of sycophantic fans as the way forward for America. God help us. Joe's too white. He's too old. He's too establishment. Let's face it, as Democrats go, he's too reasonable. If you don't think dismantling our entire economy with the Green New Deal is a grand idea then you're a dinosaur who needs to go the way of the, well, dinosaur.
Unfortunately too many Democrats continue to ride this raft down the river toward the waterfall. They're too deaf because of party loyalty or tradition to hear the rushing waters. And they don't mind pulling the rest of us over with them.
Why this sudden lurch to the left? Some will argue it's a long time coming. It really began when Nancy Pelosi became speaker the first time. Once the likes of Barney Frank were running committees we knew we had turned a dark corner. Then the American people woke up and threw them out. You'd think they'd learn a lesson, but they didn't. They figured they weren't radical enough.
Then along comes Donald Trump. With all of his distractions there's one thing liberals do notice. He's actually doing what so many Republicans before him only talked about. We got tax cuts. We're trying to get control of illegal immigration. We've abandoned this nonsense of allowing global warming to drive policy. He's the socialists' worst nightmare. That's why Anvil Joe ain't gonna cut it.

The socialists see Trump as wounded (in spite of exoneration by the Mueller investigation) and they want to strike while the iron is hot. That means going full socialist. That means Creepy Joe Biden cannot be allowed to win.