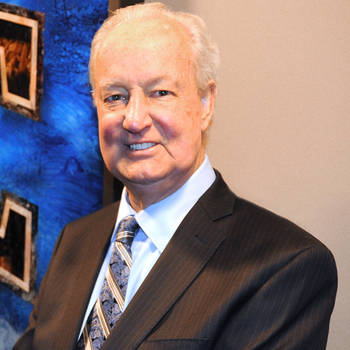 Pat Williams believed in Central Florida's potential when others didn't.

When many people thought Orlando was too small and too sleepy to support a major-league sports team, Williams saw possibilities. In 1986, he joined local businessman Jimmy Hewitt in an effort to bring an NBA expansion team to the city. A year later, league owners, sold by Williams' relentless optimism, awarded a franchise to the area.

And look at Williams. He's big-time, too.

Now 72 years old and with his blood disease multiple myeloma in remission, Williams is looking back on his accomplishments. His biggest: Bringing a team to Orlando.

"Pat was the driving force behind it," Magic CEO Alex Martins said.

"He was the individual that put tireless effort towards it, and clearly from an approval standpoint, from an expansion standpoint, he was the driving force. Jimmy Hewitt obviously had the original vision and the original thought . . . but Pat was the one who executed on that dream and made it a reality."

Hewitt said: "Pat is one of the finest. . . . I've been so blessed to have this relationship with Pat for the last 25 to 30 years, and I just can't express what it means for him to get this award, to have that kind of recognition."

Luring the NBA to Orlando isn't Williams' only success.

In 1969, after three consecutive losing seasons, the Chicago Bulls hired him as their general manager. Soon, Williams helped breathe new life into the franchise.

In 1974, Williams rejoined the 76ers as their general manager and eventually acquired such stars asJulius Erving, Maurice Cheeks and Moses Malone. The 1982-83 Sixers posted a 65-17 regular-season record and won all but one of their playoff games as they captured the NBA title.

"He's had success everywhere he's been," said Ramsay, a Hall of Fame coach who is now an analyst forESPN.

"He's a very outgoing, personable guy. He's a tireless worker. He knows what needs to be done to make things work out successfully."

Off the court, Williams has made an impact, too.

In January 2011, he was diagnosed with multiple myeloma, a treatable but incurable disease. He announced his diagnosis publicly, and that decision helped educate the public about the disease.

Williams underwent a stem-cell transplant and has completed his chemotherapy treatments, and recent tests have indicated that his illness is in remission.

"I feel good," he said. "The doctors are happy. The myeloma is in retreat. I'm still taking different forms of medication, but they don't affect me at all. I'm able to keep a full life. I'm working out every day, and I feel very good. I'm very thankful and grateful, so I'm plowing on full-speed."

Pictures of family, baseball players and basketball teams hang on the walls of his office at RDV Sportsplex.

So does a framed orange T-shirt with the words "Orlando on the way to the NBA" emblazoned across its front.

It's a memento from his effort to bring an NBA team to Central Florida.

Now, 44 years after Ramsay brought him into the league, Williams sounds awestruck that he'll receive the same award as Wooden, Auerbach and Summitt.

He'll have about four minutes to give an acceptance speech.

"Here we are, four and a half decades later, and I've often been asked what my greatest moments in basketball are," he said.

"Well, that '83 championship team and that day in April of '87 when we were informed that we had a franchise. And now I add a third: standing in Springfield, Mass., the legendary home of basketball."

For information on how to book Patt Williams for your next event, visit PremiereSpeakers.com/Pat_Williams.

Want Pat Williams for your next event?

November 06, 2019
I was general manager of the Philadelphia 76ers during the team's NBA Championship season, ...
Read more

May 15, 2018
Hoping to cash in on some decades-old luck and nostalgia,Orlando ...
Read more

I was general manager of the Philadelphia 76ers during the team's NBA Championship season, 1982-83. After that thrilling season, I began dreaming of new worlds to conquer. Why not build an NBA expansion team? That was a challenge to stir my blood. But what did I know about starting an NBA franchise? I needed mentors. I first turned to my long...
Read More

Hoping to cash in on some decades-old luck and nostalgia,Orlando Magicco-founder Pat Williams will have a blast from the past in his possession as he keeps a talking Lil' Penny doll with him during the NBA draft lottery Tuesday night. "We put the finest minds we've got on this one, and this is what they came up with," Williams joked incomment...
Read More

Article from OrlandoSentinel.com Pat Williams believed in Central Florida's potential when others didn't. When many people thought Orlando was too small and too sleepy to support a major-league sports team, Williams saw possibilities. In 1986, he joined local businessman Jimmy Hewitt in an effort to bring an NBA expansion team to the city. A y...
Read More