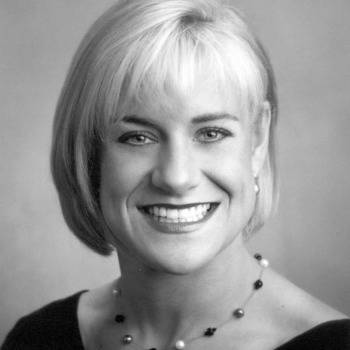 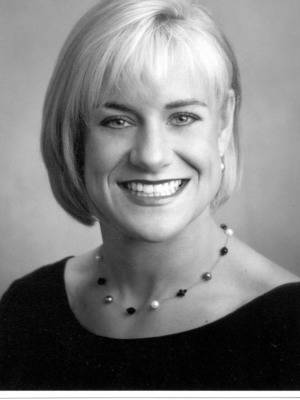 Muffy was practically born on skis. She began skiing when she was three and began ski racing when she was seven. Always a goal setter, when she was eight, Muffy told her mother, "God made me to be a ski racer!" and declared that she would ski race in the Olympics. As one of the top junior racers in the country, Muffy was well on her way to accomplishing that goal. Having grown up and competed closely with Downhill champion Picabo Street, it was very likely that Muffy, too, would make it to the top. Unfortunately tragedy struck in February of 1989. While downhill training in her hometown of Sun Valley, ID, Muffy went off course and slammed into a tree, crushing her back and resulting in complete paraplegia.

Needless to say, Muffy was devastated at the loss of her chances to become a skiing champion, but she was never one to stay down long. Where one door appeared to close, Muffy saw others open. She chose to refocus the time and energy she usually spent on racing towards academics and community service. After graduating Valedictorian of her high school class, she went on to attend and graduate from Stanford University, where she was awarded the Alumni Association's only award for service to the community.

Though Muffy thoroughly enjoyed her time and adventures at Stanford, there was still a voice inside calling her back to the mountain, back to her old dreams. While in college, Muffy spent time learning how to mono-ski, adaptive skiing for paraplegics. Feeling as though she had unfinished business on the race course, after her college graduation in 1995, Muffy decided to give ski racing another shot!

Since then, Muffy has consistently improved and excelled in disabled ski racing. As a member of the United States Disabled Ski Team, her accomplishments include: winning Silver medals in the 2002 Paralympics in Salt Lake City, UT, two World Cup Overall Titles in 2001and 2002, a bronze medal in at the Paralympics in Nagano, Japan in 1998, A World Championship 2000 in Anzere, Switzerland, five World cup Titles and over twenty five World Cup medals. In Addition, Muffy was honored by the Paralyzed Veteran's of America with their Outstanding Skier Award for her skiing accomplishments and community service. In 2002 she received the Most Inspirational Athlete of 2002 from Challenged Athletes Foundation and was awarded The Endurance Sports Award's Disabled Athlete of 2002. And just this year she was honored with the IOC President's Disabled Athlete Award.

In May of 2002, Muffy and three other paraplegics made history when they successfully ascended California's Mt. Shasta, using hand-cranked machines called SnowPods. The trip took the climbers 5.5 days to summit the 14,162' mountain and was the largest group of paraplegic mountaineers. And just last September, Muffy and a fellow adventurer made the first ever wheelchair ascent of Colorado's 14,110' Pike's Peak. That makes two summits over 14,000' for Muffy.

While skiing has always been Muffy's first love, she is also actively involved in disabled waterskiing, scuba diving, swimming, weight training, horseback riding, handcycling, mountain climbing and various community service projects. Now as a retired ski racer, Muffy is building her career in motivational speaking and is working on a book. Additionally, she is a spokesperson for Independence Technology, a Johnson & Johnson Company and the CDC's Tobacco Free Sports Program. Muffy also works as a Development Officer at the University of Utah Health Sciences Rehabilitation Center.