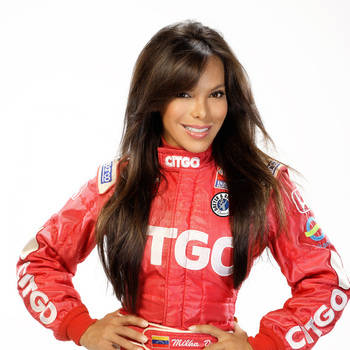 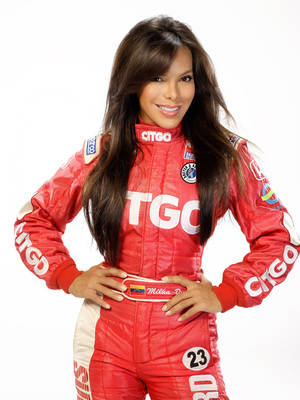 Talent, beauty and brains are just a few of the adjectives that can be used to describe race car driver Milka Duno - one of the most successful female race car drivers in the world today.

Born in Caracas, Venezuela and now residing in Miami, Florida, Milka demonstrated from an early age a desire to achieve and the dedication necessary to succeed. As a young woman she quickly recognized the value of education as the first step on her path to fulfilling her dreams.

In addition to being the most successful female sportscar racer in history, Milka is also a qualified Naval Engineer with four master's degrees - in Organizational Development, Naval Architecture, Aquaculture and Maritime Business - earning the last three degrees simultaneously.

In 1998 while working as a Naval Engineer, Milka was invited by a friend to participate in a Porsche Driving Clinic. The rest, as they say - is history. Captivated by the precision and mechanics of motorsports, Milka instantly realized that racing stimulated her passion for challenge and competition. She quickly discovered that she was meant to be a race car driver.

In only her second year of racing Milka was named "Venezuelan Auto Racing Driver of the Year" and won her first series championship - the Panoz GT Series Championship. In 2001 she was crowned Vice-Champion Driver in the LMP 675 Class of the American Le Mans Series.

Starting in 2004 and continuing through the 2006 season, Milka was the only full season female driver in the highest category of the Grand American Rolex Sports Car Series - the Daytona Prototype class. In 2004, her very first season in the series, Milka became the first woman in history to win a major international sportscar race in North America by capturing the overall win at the Grand Prix of Miami. She followed that victory with her 2nd overall win at the very same track seven months later. In 2005 Milka scored her third career Rolex Series win.

Six years ago Milka created the "Milka Way" foundation - whose mission it is to inspire children and young adults to "Aim for the Stars" and achieve academic excellence. In a tour of eight Latin American countries, Milka took this message to schools in each country to help inspire and motivate students and help them understand the importance of education - and how a strong academic background will benefit them their entire life - in all aspects of their life - and in any career they choose.

"I am very passionate about education and I want to do everything that I can to inspire young people to study hard and aim for the stars," says Duno.

Throughout her racing career Milka volunteers as often as possible to meet and visit with children in each race market she competes in. She is currently an ambassador driver for the "Racing for Kids' program which is designed to use the increasing popularity of motorsports to focus public attention and funding on the health care needs of children. Hospital visits form the heart of the program and in her role Milka spends time with sick children answering questions about her sport, posing for pictures and signing autographs.

With "Racing for Kids" Milka recently visited with the children at Cook Children's Medical Center in Fort Worth, TX as part of her race week activities leading up to her competing in the IndyCar Series race at Texas Motor Speedway.