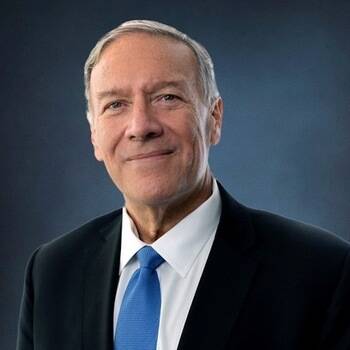 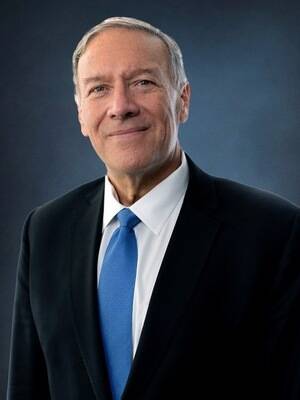 Michael R. Pompeo served as the 70th United States Secretary of State from April 2018 through January 2021. He previously served from January 2017 to April 2018 as Director of the Central Intelligence Agency. As our nation's most senior diplomat, Mr. Pompeo helped craft U.S. foreign policy based on our nation's founding ideals, putting America first. America became a massive energy exporter and a force for good in the Middle East, cementing real peace through the work of the Abraham Accords. Mr. Pompeo placed particular emphasis on renewing alliances with key allies, including India, Japan, Australia, and South Korea. Mr. Pompeo's time at the State Department marked the end of naive engagement with the Chinese Communist Party, pulling back the curtain shielding the egregious acts of the CCP that threaten American jobs and freedoms. He focused efforts on calling out and punishing perpetrators of attacks on basic human dignity in places like Venezuela, North Korea, Iran, Nigeria, China, and elsewhere. Mr. Pompeo also led a team that executed America's largest-ever global repatriation effort in the wake of the Covid-19 pandemic. Prior to joining the Trump administration, Mr. Pompeo was serving in his fourth term as congressman from Kansas' 4th District. He served on the House Intelligence Committee, Energy and Commerce Committee, and the House Select Benghazi Committee. Before serving in Congress, Mr. Pompeo spent a decade leading two manufacturing businesses in Wichita, Kansas. Mr. Pompeo founded Thayer Aerospace, a global supplier to the world's leading commercial and military aircraft builders, serving as CEO. He later became president of Sentry International, an oilfield equipment manufacturing, distribution, and service company. After graduating first in his class at the United States Military Academy at West Point in 1986, Mr. Pompeo served as a cavalry officer patrolling the Iron Curtain before the fall of the Berlin Wall. He also served with the 2nd Squadron, 7th Cavalry in the U.S. Army's Fourth Infantry Division. Once completing his active duty, Mr. Pompeo graduated from Harvard Law School, where he was an editor of the Harvard Law Review. Mr. Pompeo worked as an attorney at Williams & Connolly immediately following Harvard. Mr. Pompeo now serves as a distinguished fellow at the Hudson Institute. In 2021, he founded Champion American Values PAC, supporting political candidates across the country who will champion the U.S. and its founding principles first. Mr. Pompeo is originally from Orange, California. He is married to Susan Pompeo and has one son, Nick.