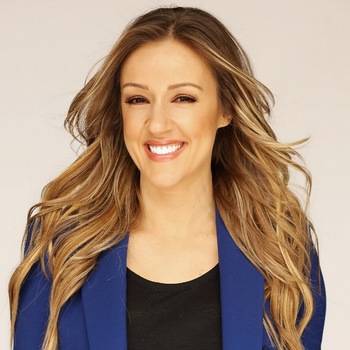 She recently sat down for an insightful interview with SheKnows to talk about the challenges she faces as a female in the male-dominated world of sports journalism:

SheKnows: What has been your experience/approach to being a woman working in the media today?

Megan Alexander: I feel very lucky to have served under some great bosses. The majority of them were men, but I have also had a few women. In many ways, I feel like media is pretty neutral when it comes to gender. I am sent on assignments just like guys. I have covered presidential campaigns, natural disasters, tragedies, red carpets, medical stories and more. For sports, we are seeing more and more females involved. Sure, there are times when the guys talk about playing football in school and I can't relate to that, but I can relate to being a female athlete. And as long as you are prepared, work hard and know your stuff, you will be fine.

SK: How have you tried to do it differently than others?

MA: I want to be known for good work first. A good story and good delivery is just that — period. Do the best work you can do and try not to worry about the fact that you are a woman covering the NFL and you have never played the sport before. Just focus on the story and study, prepare and deliver the best report possible.

SK: What are the best and worst?parts of being a woman in a male-dominated?industry?

MA: Best: I get an adrenaline rush from "playing with the big boys." I consider myself a tomboy and was an athlete in high school, so I like to "talk shop" anyway. But it's fun to actually get paid to cover the NFL with all these incredible former players and sports anchors. Worst: Haven't found one yet! I get a paycheck to cover the NFL — life ain't too bad!

SK: Tell us about covering the Super Bowl... 5 times!

MA: I am pretty proud to be the Super Bowl correspondent for Inside Edition. It is the most coveted assignment, and the most watched event in our country — every year. The pomp and circumstance during Super Bowl week leading up to the game is just incredible. But it's no party — we work long, hard hours every single day. There are tons of events to cover — press conferences, practices, ceremonies, special events, NFL meetings, security stories, etc. I never sleep that week. Then, on Super Bowl Sunday, my crew arrives at the venue at about 10 a.m. — a good eight hours before kick off, and we prepare for the game ahead and cover all the pregame action. During the game, we never sit down. Not only is there action on the field, but we also have to cover the half-time show and interview all the celebrities attending. But once it's all over, it's a pretty satisfying feeling. My team and I love delivering an exciting and all-encompassing story the next day for our viewers. We want them to see and experience all that we did. Then I go get a massage and sleep, but not for long — I have a family to come home to!

SK: You've also covered the Democratic National Convention and the MTV Awards. What was that like? They are two pretty?different worlds.

MA: Politics is quite draining. There are so many heated discussions and press conferences to cover during a convention. Things have gotten so tense on both sides in the political arena for our country. That makes the assignment a bit tiring. I do respect the political process and those that cover politics on a regular basis. It's just not for me.

MTV Awards are fun — it's MTV! You never know what's going to happen. It's a slice of pop culture in the moment, and you can't take it too seriously. I enjoy the arts and entertainment, so it's just fun to have a front row seat to all that. But as a major country music fan, the CMA awards are my favorite!

SK: Have you ever been put down by men (or women)?for "trying to do a man's job," so to speak? And how do you respond to those types of comments/actions?

MA: Well, when I got the job to cover "Thursday Night Football" on CBS, I had several guys say to me, "Oh, so you are going to just cover the 'fluff' of it? Tailgating and entertainment?" They just assume that's what I must be doing because I'm a girl. I just smile and say, "Well, a little of that, but I will mainly be covering the game." And I just change the subject. My work speaks for itself. And I have had one of those same guys watch my report after a game and tell me he was super proud of me and was impressed. I really believe when those comments come, just put your head down and do good work. Don't waste your time thinking about it when you could be preparing for your next report!

SK: Do you find that people?accidentally?say things that imply you're not as good at your job as a?man? Similar to how female comedians often encounter, "You're funny for a woman." How do you?handle those backhanded compliments?

MA: Just smile and laugh. I try not to take it too seriously. Life is too short. But again, do good work and let that speak for itself. Don't waste time arguing with someone. Instead, show them in your work. That's easier said than done, but it really is the best solution. No one can argue with good work.

SK: Did you find that becoming a mom made people treat you differently at work?

MA: Not really — if anything, people think it's cool that I'm still working. I'm proud to be a working mama in this world. I have had bosses that were genuinely excited when I told them I was pregnant. I feel very blessed, but I also know I need to continue to do excellent work and stay organized. That's just part of the gig. I know what I signed up for.

SK: What's your advice to women who have aspirations to break into a field men currently dominate?

MA: Focus on your work. Be the best you that you can be. Develop a thick skin and let things roll off your back. And keep a sense of humor!

SK: What's your best advice for overcoming the naysayers in life?

SK: Who are your female role models?

I salute all workingwomen everywhere! You inspire me to keep going!

Want Megan Alexander for your next event?

November 12, 2015
Megan Alexander is a national news correspondent, actress and one of the youngest ...
Read more

Megan Alexander is a national news correspondent, actress and one of the youngest rising stars in the national news industry. She got her start as a reporter and anchor for CBS in San Antonio, TX and later joined Inside Edition, the longest-running and top-rated national news magazine television show! Megan is also a Thursday Night Football corr...
Read More