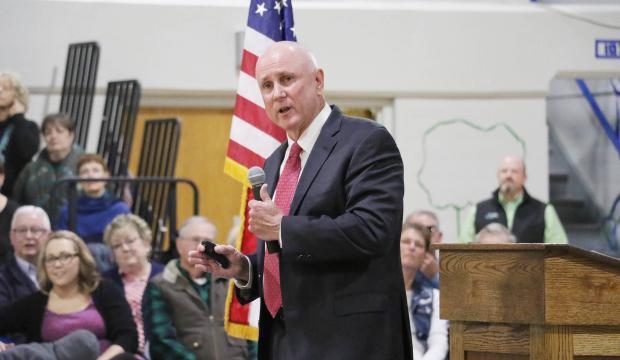 STRATFORD — When Col. Mark Tillman was the personal air chauffeur of President George W. Bush, he would often get unexpected, sometimes unusual assignments. Such was the case right about this time 14 years ago.

As the pilot and commander of Air Force One, Tillman was asked — well, no one is ever asked, but was told — to report to the White House for a meeting with Bush, Chief of Staff Andrew Card and National Security Advisor Condoleeza Rice. It wasn’t a very long meeting.

“President Bush said he was concerned that if the military knew about it, they would pass it along the chain of command and others would know. He didn’t want to take a chance that would leak and put the lives of the men and women of the military in danger.”

So only a few in the world knew that Tillman was flying the leader of the free world into the heart of a war to serve Thanksgiving dinner to troops there. That’s some way to make a living.

Tillman spoke to Stratford students and community members on Tuesday. The Stratford Education Foundation along with Stratford ISD and community sponsors brought the retired colonel from Southern California to not only speak to a large gathering in the gymnasium, but to Stratford seniors in the library.

“First time I think I’ve ever spoken in a gym,” Tillman said.

Tillman was the 12th presidential pilot of Air Force One, the airborne mobile command center he called “The Flying White House.” Eighteen years on the Air Force One crew, he was the commander for all eight years of the Bush presidency.

That meant ample supply of Bush’s favorite foods on board — Tex-Mex, pizza and chocolate sundaes. But also flying dangerous assignments with the president in tow, including Sept. 11, 2001, a day that started with Tillman routinely going into the 747 that morning in Sarasota, Fla., to spiriting the president to two different air bases and back to Washington as America was under attack.

It was a harrowing flight, even before F-16 fighters became escorts. As they were about to take off from Sarasota, the Secret Service sent word there was a man on the runway with a gun.

“They said there appears to a man pointing a gun at Air Force One,” Tillman said. “As it turned out, a man had come to the runway at the last minute with his kids, somehow got positioned and took a camera out of gun case to take pictures of Air Force One. They apprehended the man, but he just picked the wrong time, place and day to take pictures.”

Tillman never knew what might be on the ground either on takeoff or landing. In 2004, two weeks before Tillman was to fly Bush to an African country he said he couldn’t name, he received some concerning news.

The airport runway was at the base of a lake, and intelligence said there was a high possibility fishermen would be on the lake with rocket launchers to fire at Air Force One. The way the Air Force would have handled it, Tillman said, was to plan for five days and then bomb the lake until there was no more water.

That wasn’t an option, but a Navy SEAL team was. The team flew in on a C-17 Globemaster and was dropped into the lake 36 hours before Air Force One was to fly there.

“Seventeen hours after they landed, they called me up in South Africa — ‘Colonel Tillman, Seal Team lead, the lake is secure.’ I said, ‘How did you guys do that? You only been there a few hours. How did you do that?’

“‘I doesn’t matter, Colonel. The lake is secure.’”

Tillman saw Bush during the kind of stress that only a president knows. On 9/11, he wanted no part of going to an underground bunker, and he also made a solemn decision to shoot down the plane that seemed to be headed for the White House or Capitol if it came to that. It did not because of the crash in Pennsylvania.

“He was a real leader, and you saw that on 9/11,” Tillman said. “He took all of the information available, and then made a decision. I saw that when he went to Baghdad.”

Tillman flew Bush from Waco to Washington, and then from Washington to Baghdad. Because of the secrecy, Tillman had to do much of the planning on landing, choosing a remote part of the airport with enemy fire uncomfortably close.

A photo then flashed on the screen at Stratford. Bush was in the cockpit with Tillman and a co-pilot as Air Force One approached the Baghdad airport. Al lights were off as they approached a dark landing area.

“This was taken by President Bush’s photographer,” Tillman said. “Things are a little tense. She said, ‘Mr. President, is it OK to flash?’ President Bush said, ‘Absolutely, but pull your pants right back up when you’re finished.’”

Jon Mark Beilue is an AGN Media columnist. He can be reached at jon.beilue@amarillo.com or 806-345-3318. Twitter: @jonmarkbeilue.

Want Col. Mark Tillman for your next event?

September 11, 2019
On this week's episode of the Beyond Speaking podcast, ...
Read more

The Unknown Backstory of 9/11 Former Air Force One Pilot Col. Mark Tillman shares his untold story of flying the President on 9/11, deciphering information in the fog of war, and bringing the Commander-in-Chief to Ground Zero. About Col. Mark: Chosen as the nation's 12th Presidential pilot, Colonel (ret) Mark W. Tillman served as pilot an...
Read More

On this week's episode of the Beyond Speaking podcast, Former Air Force One Pilot Col. Mark Tillman shares his untold story of flying the president on 9/11, deciphering information in the fog of war and bringing the Commander-in-Chief to Ground Zero. Listen here:http://bit.ly/BSPTillman To book Col. Mark Tillman for your event, click here....
Read More

STRATFORD - When Col. Mark Tillman was the personal air chauffeur of President George W. Bush, he would often get unexpected, sometimes unusual assignments. Such was the case right about this time 14 years ago. As the pilot and commander of Air Force One, Tillman was asked - well, no one is ever asked, but was told - to report to the Whit...
Read More

Former Air Force One Commander, Col. Mark Tillman recently gave a captivating presentation in New York City as part of our Premiere Forum. This event was organized by our NYC agent, Jordan Smallwood, as a way to build a community around the forums as they take in stories as a collective. Attendees had the opportunity to hear Mark share what i...
Read More

Premiere Speakers is proud to announce our latest exclusive speaker, Col. Mark Tillman, who served as commander of Air Force One for eight years under President George W. Bush. The recently retired colonel was responsible for "the flying White House" throughout both of Bush's terms and has edge-of-your-seat stories to share about keeping the Pre...
Read More