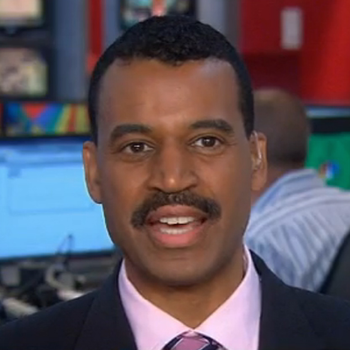 Krishna Thompson is an advocate for the welfare of the world's shark population, working with governmental agencies to stop the practice of "shark finning" and raise awareness of the shark's position in the food chain as an apex predator.

It's perhaps an unusual role, given the fact that Thompson – who works on Wall Street in the banking industry – lost his left leg when he was attacked by a shark in 2001 while vacationing in the Bahamas. But when the PEW Environmental Group approached him for help in their campaign against shark finning – the removal of a shark's fin, then returning the shark to the water, where it will soon die after its fin is removed – Thompson decided to help.

On Monday, Thompson stood before a lecture hall full of marine science majors at Stony Brook University to share his story. His story was filmed by CBS/Discovery Channel to be aired during Shark Week later this year.

"There's a lot of work. Isn't there always a lot of work to be done?" Thompson said. "I'm not doing this because of the shark. ... It's about our oceans. Our world. Our generations. That's important to me."

According to the PEW Environmental Group, as many as 73 million sharks each year are killed by people, whereas an average of 65 people per year are injured in shark attacks with only a handful of related deaths.

"If a guy like Krishna can say 'save the sharks' then surely all of us who have never been bitten can get behind that," said Demian Chapman, an assistant professor in the School of Marine and Atmospheric Sciences.

Thompson described the morning of his attack as an eerie day. "It was freezing," he said. "[The water] was murky. It was choppy."

But he was on vacation, and he wanted to swim. As he was treading water, he saw a shark fin approaching.

"I didn't expect to outrun a shark," Thompson said. "I thought I could just ease back and be OK."

But the shark grabbed his left leg below his knee – he even heard the shark's teeth crack down on his leg – and it began to drag him out to sea, shaking him violently and pulling him under the water. Thompson said he didn't know when he would be able to take his next breath.

"The shark controlled my breathing. That's a scary feeling," he said.

At one point, when the shark stopped shaking him, Thompson took a chance and reached down to punch the shark and try to push it off his leg. It worked; but he looked down and saw his bones exposed. All the skin, muscle, arteries were gone, and there was blood everywhere. He managed to do the breast stroke until he got to shallow water, then cried for help.

Thompson went into cardiac arrest, and was eventually flown to a hospital in Miami, where doctors amputated his left leg. Today, he walks with a prosthetic leg.

"When they look at me today, they say, 'Why's Krishna so happy?'" he said. "You know why I'm happy? Because I'm happy to be alive."

For information on how to book Krishna Thompson for your next event, visit PremiereSpeakers.com/Krishna_Thompson.

Want Krishna Thompson for your next event?

Shark attack survivor visits Stony Brook University, films "Shark Week" segment for the Discovery Channel. Article from Patch.com, written by Christine Sampson. Krishna Thompson is an advocate for the welfare of the world's shark population, working with governmental agencies to stop the practice of "shark finning" and raise awareness of t...
Read More