Regarded as One of the Young Lions of Jazz 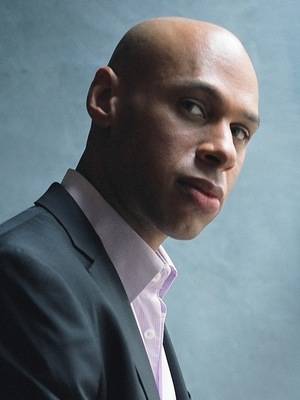 Joshua Redman's Back East is the tenor saxophonist and composer's second Nonesuch release and his first recording in an acoustic trio setting. A marked contrast to Redman's plugged-in, groove-based sessions with the Elastic Band or his collaborations with the eight-piece SFJAZZ Collective, this sax-bass-drums format harkens back to the Berkeley, California-based artist's early days as a performer more than 15 years ago. He was indeed working back east then, in Boston and New York City, and necessity as much as aesthetics often dictated the lineup. Sometimes a club he'd be playing simply wouldn't have a piano, in which case a quartet would be out of the question. But Redman, whom The New York Times has described as "a remarkably fluid improviser," isn't merely attempting to recall his scuffling roots. Back East is full of in-the-moment pleasures, thanks to the natural rapport between Redman and the three NYC-based rhythm sections with whom he works. But take a closer look at the songs he's chosen, the arrangements he's fashioned and the players he's hung out with, and this set becomes even more deeply compelling. Redman incorporates a stunningly wide range of ideas, experiences and influences, creating a multi-layered self-portrait via the sounds, people and places that have helped to shape his career.

On Back East, Redman says there is "a sense of return to a style I associate with the east coast, a return to playing - for lack of a better description - modern, swing-based, acoustic jazz. This was and is my musical bread and butter, the core of what I do. That approach to playing is one I really immersed myself in and developed during my time on the east coast. In Boston, I wasn't studying music, but I was hanging out with a lot of musicians, and that's where I really learned how to play. And when I first moved to New York, I was still playing a lot of jam sessions, and doing lots of gigs at local clubs, bars and restaurants, sometimes with just bass and drums. So there's this sense of getting back to something that was really important to me in terms of my musical development but which I haven't captured so much recently through touring and recording."

While he was still working with the funk-infused, electrified Elastic Band, whose most recent project was the 2005 Nonesuch disc Momentum, Redman started to compose new material with an acoustic trio in mind. The process evolved into a sort of internal dialogue about the concepts of east and west, but not just in terms of two distinct coasts. "East" for Redman also represents non-western sounds - Middle Eastern, Indonesian, Indian, African - that have surfaced in his writing and arranging, and that came to play an important, if subtle, role here.

"As I was writing," Redman explains, "some eastern influences, which have always been in my music on some level, were coming out perhaps a little more strongly in this context. When I was really young, my mom took me to this place called the Center for World Music in Berkeley, where I studied (on a very rudimentary level, of course) South Indian drumming and Indonesian Gamelan. She also took me to all sorts of music and dance performances - Indian, Indonesian, Persian, North African, Japanese, Tibetan...you name it. There was a lot of that in the Bay Area in those days - a really eclectic, outward-looking, cross-cultural orientation." The spare, sinuous "Zarafah" is, at least in part, a nod to this period and a special dedication to his mother, dancer Renee Shedroff.

The east/west dichotomy soon became even more of a leitmotif. Says Redman, "One day I had one of those cool, quintessentially 21st century, digital music experiences. I had my iTunes on shuffle and the Sonny Rollins album Way Out West came on. I always loved that record, but I hadn't heard it in probably over a decade. "I'm An Old Cow Hand" was playing and man, it just sounded so amazing. It was almost like I was hearing it for the first time. Naturally, it had a lot of relevance to the new music I was working on, because Sonny Rollins was probably the first, and arguably the greatest, saxophonist to really embrace the trio format. I got this burst of inspiration and came up with my own arrangement of "I'm An Old Cow Hand." Sonny's influence is clearly there in terms of the hard-driving and freewheeling approach, but I used harmonies, melodies and rhythms that give this version a bit of an eastern flavor. Immediately after that I started working on an arragement of "Wagon Wheels," also from Way Out West, which ended up with even more of that feeling."

Both of those tunes made it to Redman's final track list, and Rollins' 1957 classic trio outing, Way Out West, became a touchstone for the entire project. "There's something stark and contemplative about the trio format, but something liberating and exhilarating about it as well. There's an introspective quality, a real intensity to it, but that intensity can also be very emotive and outward-reaching. Perhaps that's part of the reason Sonny started to work with just bass and drums, so he could explore and express his ideas and emotions as freely as possible. That's one of the things about trio that I find so compelling. Don't get me wrong: I love the piano! And there is a lot of music I can't imagine playing without a pianist. But the absence of a dedicated harmonic instrument does create the possibility for much more freedom, in many different areas - harmonic, melodic, rhythmic, formal, textural. It's a lot more fun. But as the saying goes, 'with freedom, comes responsibility.' Playing trio can be uniquely liberating; and especially challenging!"

Redman had initially envisioned an album of mostly originals, but, with Rollins' vintage covers as a jumping-off point, he created new arrangements of songs originally composed by, or associated with, major saxophone influences, such as John Coltrane ("India"), Stan Getz ("East of the Sun"), and Wayne Shorter ("Indian Song"). Although he was more accustomed to working with just a single set of players in the studio, for this project Redman chose to record with three different rhythm sections, all of them long-time collaborators as well as old friends, each bringing something unique to the mix. Bassist Larry Grenadier and drummer Ali Jackson ("Their sound together is so strong, centered, buoyant and clear," says Redman.) play on six tracks, opening and closing the disc. Bassist Rueben Rogers and drummer Eric Harland ("fluid, flexible, organic, energetic") can be heard on three, and bassist Christian McBride and dummer Brian Blade ("mature, soulful, empathetic, virtuosic") on the remaining two.

Sitting in on "Indian Song" is tenor saxophonist Joe Lovano, whom Redman describes as a "true hero, a huge influence, one of the greatest saxophonists to emerge post-Coltrane, a master of rhythm and phrasing." Playing soprano on Redman's own "Mantra #5" is Chris Creek, who "of all the saxophonists in my generation," says Redman, "has probably had the most profound impact on my own musical development. He completely knocked me out when I first heard him upon arriving in Boston. And over the next four years, listening to Chris really helped me find my way as a saxophonist and improviser."

Foremost among Redman's guests was his 75-year-old father, the legendary Dewey Redman, who would, unfortunately, pass away several months after the Back East sessions were completed. Dewey plays tenor on "India." "We did a few takes," Joshua remembers, "and everything was cool. I was getting ready to start on another song when Dad said, 'Okay, but now I want to record something else, on alto,'"...and, Dewey added, he wanted to do it by himself, backed only by Grenadier and Jackson.

Slightly puzzled, Joshua left his father with his band-mates. "I walked around the corner and got an espresso, came back maybe eight minutes later, and Dad was already packing up. 'How'd it go?' I asked. 'Fine, one take,' he said. So, I thought, 'Great. Let's move on.' We were kind of running behind in the session, so I didn't really listen to the song then. In fact, I almost forgot about it. It wasn't until days later, when I was back home in Berkeley, that I really got a chance to check it out. Of course, I was blown away. It's an incredible piece of music: so warm, deep and wise."

The track Dewey had created, "GJ," had been intended as a gift to Josh's infant son. It took on an even more profound cast after Dewey's passing. That studio date represented the final meeting of father and son as well as the last recording the elder Redman made. "GJ" became a gift to Joshua as well, a reminder of when he was performing back east with his father, in '91 and '92: "I played and toured with Dad a lot when I first came to New York. I really got to know him as a person as well as a master musician. Playing with him, having to solo after him every night, made me realize just how young and immature I was. It was his depth of soul, the hugeness and warmth and humanity of his sound. The wisdom and compassion and patience that lay behind every note he played. Probably more than anything else, I learned from him about sound, about phrasing, and about how to play the blues."

"GJ" is a fitting coda, then, to an album that is as much about generations as geography. With Back East, Redman traces the path inspiration travels from decade to decade, coast to coast, continent to continent, artist to artist, heart to heart.