How To Master Any Skill

No one represents mastery more than Pablo Picasso. His masterpiece Women of Algiers sold at auction in New York for over $179 million in 2015, shattering all previous records. His most famous works are instantly recognizable, and he pioneered several styles and genres of modern art throughout his prolific career. 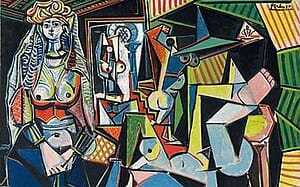 We think of Picasso's creative brilliance as a heavenly gift. Certainly, he had natural talent. But the real secret to his mastery was the sheer volume he created. Over his 78 years as a professional artist, Picasso created 147,800 pieces including 13,500 paintings, 100,000 prints and engravings, 300 sculptures and ceramics and 34,000 illustrations. He even penned 300 poems.

In other words, Picasso did the reps. His skill was harnessed through consistent output and thousands of hours toiling away at his beloved craft. Of the staggering 147,800 original works he created, only 44 are considered truly famous. That's just 0.0298% of his total work product that's recognizable to all but the most sophisticated experts.

To me, this is liberating. We put so much pressure on ourselves to deliver legendary work -- every time -- and then get disappointed when we inevitably fall short. If Picasso's win rate is under three-tenths of one percent, can't we all accept a few stumbles on the way to greatness?

The truth is that any skill worth pursuing is mastered through repetition far more than natural talent. Which means that we mere mortals can develop mad skills in the things that matter most to us, as long as we're willing to do the reps.

Whether your passion is sports or business, science or the arts, realize that your skills are directly linked to the consistency and persistence of your practice. We can all become the masters of our craft if we're willing to endure relentless training.

As Tony Robbins puts it, "Repetition is the mother of skill." Master your skill through grit and determination, and before long . you'll be considered a "natural."

The post How To Master Any Skill appeared first on Josh Linkner.

How Innovation is Becoming the Cure for COVID-19

Can Quarantines be Productive? What to do During a Crisis.

A 3-Step Formula to Perfectly Communicate Your Value to Customers

How Innovation is Becoming the Cure for COVID-19

These days, I often wake up thinking it was all a dream. But by the first scan of the morning's headlines, I realize we're still in the zombie horror movie known as coronavirus. Just like in most low-budget cult flicks, an unlikely hero is emerging who will conquer the threat and safe the day. Her name: human creativity. As politicians pick figh...
Read More

Can Quarantines be Productive? What to do During a Crisis.

Just before every flight departs, the safety announcement offers a specific instruction: "In the event of an emergency, please secure your own oxygen mask before helping others." We've heard it so many times that we tend to tune it out, but this advice can be helpful to us all during the COVID-19 crisis. We must first take care of ourselves i...
Read More

A 3-Step Formula to Perfectly Communicate Your Value to Customers

As business leaders, we're often faced with the challenge of explaining what we do. It could be in a casual setting like a dinner party, or a more formal sales presentation to that big new potential account. The problem is, most of us get it all wrong. We tend to explain what we do in the context of our product or service. We tell people we manu...
Read More

Don't Be Afraid to Get a Little Crazy

We're often told to follow the rules, do what we're told, and for goodness sake, don't make waves. But in today's hyper-competitive economy, isn't that a surefire path to mediocrity? Look at those that we celebrate - from Thomas Edison to Elon Musk; from Sheryl Sandberg to Tony Robbins. The ones that make history have one thing in common: they'r...
Read More

If You Want Growth, Your Company Must Have These Three Non-Traditional Roles

From the local barbershop to the giant, multinational corporation, businesses of all shapes and sizes desperately want one thing: growth. Regardless of industry, geography, or scale, a company's ability to grow is directly linked to the inherent enterprise value. In working closely with organizations around the world, I've noticed that the ones ...
Read More

There's been plenty written about the habits of highly successful people. They set goals and they follow through. They learn and listen. We get it. But what do the most successful people avoid? From celebrity entrepreneurs to captains of industry, here are seven surprising things that top achievers prefer to skip: Don't have a Plan B. We're tau...
Read More

How To Master Any Skill

No one represents mastery more than Pablo Picasso. His masterpiece Women of Algiers sold at auction in New York for over $179 million in 2015, shattering all previous records. His most famous works are instantly recognizable, and he pioneered several styles and genres of modern art throughout his prolific career. We think of Picasso's creative ...
Read More

How to Find the Best Parking Spot, Every Time

As you drive up to a crowded shopping plaza, your blood pressure rises quickly. Circling the parking lot, you search for the closest possible space. It quickly becomes a fierce competition, filling you with stress and sometimes anger if someone beats you to that one spot that should have been yours. Several laps and minutes later, you land in a ...
Read More

3 Surprisingly Simple Questions That Will Transform Your Career

In our quest for achievement, it's easy to get caught up in complexity. We often think something has to be difficult in order for it to drive real progress. But then something so simple comes along that drives the most profound advancement in our careers, companies, and even in communities. I've discovered three dead-simple questions that can dr...
Read More

For most of us, we know what needs to be done to reach the next level. If you want to improve health and fitness, we don't need another fad diet we need to exercise more and eat healthier food. If you want to close more deals, you probably need to make more cold calls. If you want to ace the big exam, studying more is a pretty clear path. Indee...
Read More