Leader, Activist & Head Football Coach at the University of Michigan 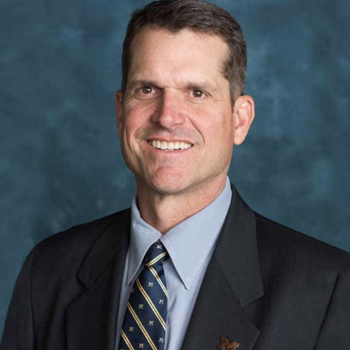 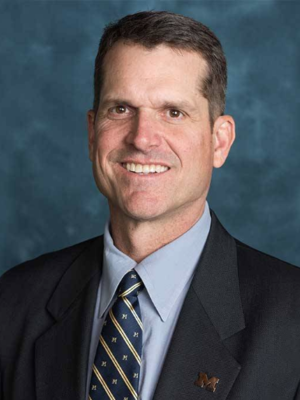 Jim Harbaugh's bold passion, combined with his unique ability to rally a struggling team, and cultivate trusting relationships has made him one of today's most respected leaders on and off the field. The son of beloved college football coach Jack Harbaugh, Jim comes from a family with a deep tradition of strong leaders and an unprecedented dedication to the game of football.

Harbaugh attended the University of Michigan where he won Big Ten Conference Player of the Year, started in a Rose Bowl and finished third in a competitive Heisman Trophy race. After college, he enjoyed a successful 14-year career in the NFL playing for the Chicago Bears, Indianapolis Colts, Baltimore Ravens and the San Diego Chargers. He earned the nickname "Captain Comeback" for his ability to turn around a team with a losing record. This talent made him a highly sought-after coach following his retirement in 2000.

Jim was the quarterback coach for the Oakland Raiders in 2002 and 2003 and is credited with mentoring starting quarterback Rich Gannon to an appearance at Superbowl XXXVII. In 2004, he joined the University of San Diego for three seasons where he led the Toreros to a 29-6 record during his tenure. Then, Harbaugh became the Head Coach at Stanford University, turning their abysmal 1-11 record in 2006 into a memory of the past when in 2010 he led the Cardinal to a 12-1 record just four seasons later, earning himself the Woody Hayes Coach of the Year award. In 2011, Jim returned to the NFL as Head Coach for the San Francisco 49ers where he became one of their most successful coaches in the league after just four years where he earned multiple NFC championship appearances and was named NFC Coach of the year.

In 2015, Harbaugh made the decision to return to his alma mater as head coach at the University of Michigan. His father Jack, who coached at Michigan from 1973-1979, was brought back on to the staff and continues to serve as an inspiration for Jim's books, Enthusiasm Unknown to Mankind and Rise Again, each of which is a collection of intimate photos and quotes that have motivated the Harbaugh family and the teams they have led.

Off the field, Jim is a passionate supporter of equal access to justice. He serves on The Legal Services Corporation's Leaders Council which works to increase access to civil legal assistance for low-income Americans. "True leadership is standing up on behalf of the marginalized to always do what is right," says Harbaugh.

In 1998, he established the Jim Harbaugh Foundation with the mission to support Michigan's at-risk youth and the organizations that provide them with the aid and support they need to succeed. In 2018, the V Foundation has decided to honor Harbaugh for his commitment to fighting pediatric cancer.

Jim Harbaugh attacks each day with an enthusiasm unknown to mankind. His keynotes will inspire audiences to live boldly, lead authentically, and approach challenges with passion and persistence.