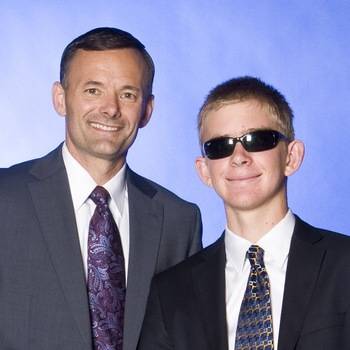 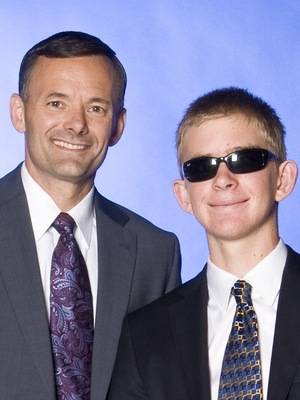 Jake Olson
Jake is 15 years old, a resident of Huntington Beach, California, and a 10th grade student. When Jake was 8 months old, he was diagnosed with a rare form of eye cancer, retinoblastoma. The disease claimed his left eye before the tender age of one and in November 2009 Jake lost his right eye after battling the cancer for 12 years. Jake confronted many challenges during his battle and has used his experience to better himself as a person and develop a strong faith in God. Jake wrote a book when he was 8 years old to uplift and encourage other children who were battling cancer and other diseases. Jake has shared his book and faith with countless others, including both adults and children, who have been touched by his story.

Jake is also a lifelong University of Southern California football fan. He became close friends with the coaching staff and team when he lost his sight. Meeting Coach Pete Carroll and the team was a special experience for both Jake and his family. His ongoing relationship with Coach Carroll and the USC players has blessed Jake beyond measure during some of his most trying times and these relationships have grown into special friendships. Leading up to Jake's surgery, ESPN's Shelly Smith captured his story alongside the Trojan football team, his battle with cancer and his courage in an inspirational documentary film. The documentary has been aired on ESPN, Good Morning America, ABC's Evening News and has been nominated for an ESPY award. Jake was also a guest commentator on ESPN's College Game Day on New Years' Day.

With Jake's recent fame, he has had the opportunity to speak about his experiences and faith in front of corporations, schools, service organizations and congregations. Jake was a keynote speaker at Dick Vitale's 5th Annual V Foundation for Cancer Research Event held in Sarasota, Florida, and has had several opportunities to speak for the benefit of The American Cancer Society. In 2010, he and his twin sister, Emma, went to Costa Rica on a mission trip to help build houses and encourage disadvantaged children. In October 2011, Jake was featured on the Fox Network in an exclusive story about his ability to overcome and succeed despite tremendous challenges. And most recently, USC now sells Jake-inspired "Fight On" t-shirts and hats in Braille with proceeds going to Jake's Out of Sight Faith charity.

Jake attends Huntington Christian School and has remained a straight-A student even during his transition to blindness. Jake plays on the school football team and also enjoys golf, skiing, surfing, and playing the guitar. Jake has set a personal goal to become the first blind golfer to join the PGA golf tour. Jake's love for and dedication to the game of golf caught the attention of Travis Mathew golf clothing company. Jake and Travis Mathew have teamed up to develop a first-of-its-kind "Braille" golf shirt, with messages scripted in Braille on shirts that offer golfers a smart, progressive look with a sizeable portion of the proceeds from every shirt sold going to Jake's favorite charities. Jake has been added to the TravisMathew.com player team, joining PGA touring pros John Mallinger, Bubba Watson, Tommy Armour, and others.

Jake loves to help and serve others. Jake is not afraid to challenge himself or challenge others and has personally raised his expectations for his own life. Jake's faith and attitude have been an inspiration to others, and his belief in making the most out of life continues to motivate those around him.

McKay Christensen
McKay is the President of a $1 billion consumer products company with hundreds of thousands of employees and sales representatives. McKay speaks to audiences around the country about leadership, teamwork, perseverance, and personal performance. In his current position and his past leadership roles with Fortune 500 companies, he's led diverse teams in marketing, sales and management. He has written numerous articles on career development, leadership and business management and co-authored a book on career development. He has an M.B.A. and a Ph.D. in Organization and Adult Learning.

As part of his doctoral work, McKay led groundbreaking research on how adults learn and find happiness. This research, one of the most comprehensive quantitative studies of its kind, reveals how people can learn to be happy. His research and publication experience includes topics such as servant leadership, transformation as adults, and lasting change. McKay has a heartfelt passion for helping others reach their full potential. He currently teaches graduate school courses at Idaho State University.

McKay was born on Luke Air Force base and was the son of a fighter pilot. At the age of 15, McKay was crushed by a 14-ton harvester in a farming accident which left him with a broken leg and back, crushed pelvis, collapsed lung, and a dozen other broken bones. McKay spent months recovering. McKay went on to compete in athletics, and today he is an avid runner, has completed 46 marathons (including the Boston Marathon twice) and half marathons. His goal is to complete 100 before he is 55 years of age. As a young man, living in the Rocky Mountains, he learned to fly fish. Even today, he still loves to escape to the South Fork of the Snake River for a day of fishing. McKay speaks Japanese and has lived and worked in Japan. He and his wife, Jennifer, are the parents of five children.

Coming Together
Jake and McKay met while making a presentation together in 2010. As they talked, McKay learned of Jake's remarkable past and was amazed at the wisdom Jake possessed as a 12-year-old boy. As McKay got to know Jake's sister, Emma, and Jake's parents, he knew the world needed to hear Jake's story and how faith can open your eyes to a happier life as it had for the Olson family.

As they spent time talking about their beliefs and desire to help people, Jake learned about McKay's research and passion for helping others find happiness, and the idea for Open Your Eyes to a Happier Life was born. McKay and Jake couldn't be more different: one a business executive and the other a blind high school student. Yet, their vision for changing the world is the same.