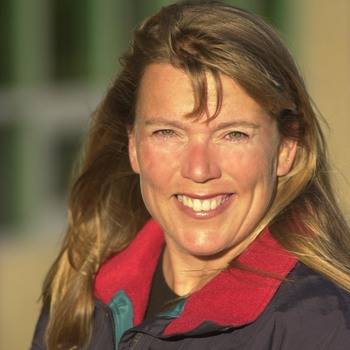 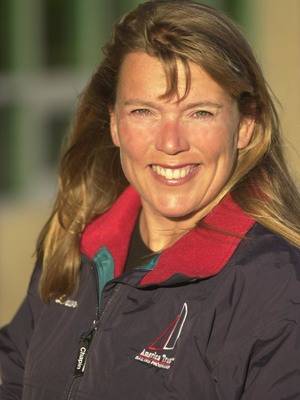 Pioneering CEO and Captain of America True and one of the world's Top sailors, Dawn Riley has extensive and harrowing international experience including leading two Whitbread Round The World Race Sailing Teams and the French America's Cup team, AREVA bringing her total to 4 America's Cups.

She was the first American, man or woman to race in three America's Cup and two Whitbread Round The World Race Sailing teams, including winning the 1992 America's Cup. Riley also served as president of the Women's Sports Foundation, founded by Billie Jean King.

Growing up in Detroit, Michigan, where she sailed on Lake St. Clair, Dawn became obsessed with sailboat racing at the age of 13. She joined North Star Sail Club and became Commodore of the junior sailing program. Dawn said it was difficult to break into professional sailing, she had to clean quite a few boat bottoms and learn to fix motors before people took her seriously.

Dawn Riley now has a resume that includes 1999 Rolex Yachtswoman of the year, 2002 IC 45 World Championship, first two-time winner of the Santa Maria Cup, crew on the Maxi Yacht Morning Glory as they set the all time course record in the 1996 Sydney to Hobart ocean race. She was also team captain of America3, the historic all-women America's Cup team in 1995, a member of the winning America's Cup team America3 in 1992 and skipper of Heineken, the all-women team in the 1993-94 Whitbread Round the World sailing marathon. According to Riley, teamwork means choosing the right person for each job, man or woman.

A television host, author and experienced public speaker, Riley has spoken on topics ranging from entertaining sea stories to defining and attaining personal success, from risk assessment to competing in coed world. Dawn's experience creating and managing $20-35 million projects is used to make the topics of teambuilding and achievement especially relevant to businesses.

In addition to her involvement with the Women's Sports Foundation, she continues as the CEO of America True Foundation, currently dedicated to providing youth with the opportunity to benefit from sailing and its inherent life lessons nation-wide. Dawn Riley is also an advisory board member of the National Women's Sailing Association, National Sailing
Hall of Fame and a founding member of the International Women's Match Racing Association, Agua Limpia an environmental education effort and a Young Leader with the BMW Herbert Quant Foundation and the Aspen Institute.

Some reviews:
BMW: Dawn's lively presentation was excellent, she is a brilliant speaker, and she knows how to attract the attention of the audience. Her presentation was really outstanding.

"Your inspirational words about the importance of sailing as a unifier, equalizer and source of freedom for children, as well as adults, was the perfect message for our gala and really helped to prove that it is 'all about the kids.' - Steve Frank Executive Director - Community Sailing of Colorado, Ltd. Just so you know we raised over $45,000 that evening. That is so awesome, because last year we only raised $29,000. "IT'S ABOUT THE KIDS!"

YPO: Of all of the speakers this trip, you were the most engaging across the board.