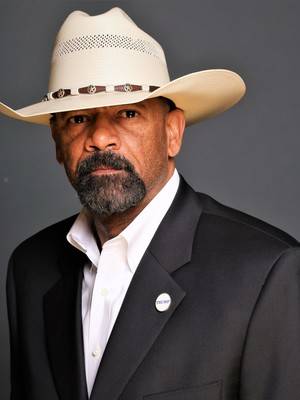 About Sheriff David A. Clarke Jr.

After nearly four decades in law enforcement, Sheriff David Clarke has found innovative ways to serve the public that gives him the freedom to reach millions of Americans with his message, unfiltered by the confines of holding an elected office. In addition to his dedication and focus as the Sheriff of a large metropolitan county, Clarke developed a passion for political commentary. He is fondly referred to as the "People's Sheriff" because he has the natural ability to explain complicated ...

The principles Sheriff Clarke stands for are the same principles this nation was built on. He's much more than the Milwaukee County Sheriff. He's America's Sheriff.

Clarke is a unique voice today: fearless in his contempt for political correctness and eloquent in his articulation of core American values.

Sheriff Davide Clarke provides a much needed voice of reason in tackling America's challenges. He speaks his mind, and his no-nonsense approach to law and order is exactly what we need to make our country safer.

Even in a predominantly liberal community, his message of law and order, accountability, and self empowerment resonates. He is one of America's most important cultural voices.

At a time when America seems to have lost its way, Sheriff David Clarke offers critically important leadership, both as one of the nations' top cops and as a much-needed public truth teller.

Sheriff Clarke gave a very cognizant, forthright and down to earth speech that every citizen in our nation needs to hear. His message was very well received by our specific audience and his ability to captivate everyone's attention was certainly evident. I, as County Chair, would highly recommend him to anyone interested in a speaker who does not try to 'butter' up a specific topic but instead lays out the absolute facts. Even though Sheriff Clarke spoke approximately 45 minutes it only seems as though it was 5 minutes. I would personally enjoy hearing him speak again!

8 speaker reviews for Sheriff David A. Clarke Jr. View All