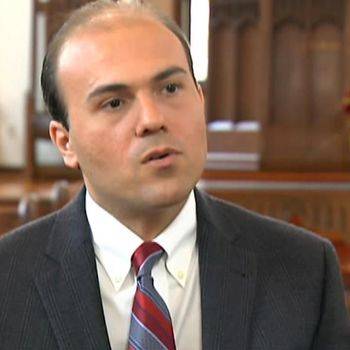 Pastor Saeed Abedini is calling on believers to pray for Christians who continue to be held in Iranian prison for their faith, including an underground female church leader who directly helped his ministry.

"No one is paying attention to those left behind in prison for almost three years now, even though they were part of Saeed Ministries," Abedini wrote on Facebook Wednesday, sharing the story of an imprisoned Christian in Iran named Nasim.

"Nasim was the first girl to became a Christian after my sisters, Zeebandeh Abedini and Elnaz Abedini. She was the first underground female leader and one of five leaders that helped us start churches before I became a pastor," he revealed.

"Every time I got arrested, some leaders became afraid to work close to me and some left. But Nasim was the only one who stayed beside us until the end when I was put in Evin prison. This woman never gave up or chose fear and doubt. She always stayed beside us in Saeed Ministries until prison broke apart our ministry," he added.

Abedini said Nasim was arrested by Iranian authorities and sentenced to four years in prison for assisting his ministry. Although she initially managed to escape and go to Turkey, she came back of her own free will to finish her prison sentence in Iran.

She explained her decision in a letter to Abedini, saying, "I couldn't live in freedom knowing my pastor, who first shared the Gospel with my family and me, was still suffering in prison. So I came back to prison by my own choice to stand with you and the Lord while you are in chains."

The American pastor reflected that now he is free, but "this Christian sister is still in chains so this makes my Freedom hard to enjoy."

He's now calling on Christians worldwide to "join our hands together again as we did before to pray for Nasim who is one of us and a Member of Saeed Ministries. When one suffers, we all suffer."

Abedini was released back in January after three and a half years in prison. He has since returned to come back home to Boise, Idaho, where he has been reunited with his two young children.

He has also spoken about the beatings and torture he faced in prison, and revealed that he derived strength from God through prayer to get him through the hard times.

"Although I experienced some torture in prison, the thing I remember is that I could not speak for myself. He (Jesus) taught me to turn to Him instead of man," he said in February.

"And now I know that you all were my voice. I had no voice in prison. My prayer is that we will continue to be that voice for each other. We are one in prayer. It is the most powerful thing we do."

Want to bring Pastor Saeed to your next event? Let us know here. We'd love to help make it happen!

Want Saeed Abedini for your next event?

American Pastor Saeed Abedini was held for three-and-a-half years in an Iranian prison for sharing his Christian beliefs. During that time, he was beaten, tortured and pressured by Iranian officials to deny his faith, but he refused. Abedini, who has been vocal about his harrowing experience, shared a story in aFacebookpost Sunday that detailed...
Read More

Pastor Saeed Abedini asks, 'Is it possible that some pastors need to repent and become humble before God?' Pastor Saeed Abedini-who recently regained his freedom after more than three years of imprisonment in Iran for practicing his Christian faith-is pleased that a lot of American Christians are now craving for a revival. Unfortunat...
Read More

Pastor Saeed Abedini is calling on believers to pray for Christians who continue to be held in Iranian prison for their faith, including an underground female church leader who directly helped his ministry. "No one is paying attention to those left behind in prison for almost three years now, even though they were part of Saeed Ministries,"...
Read More