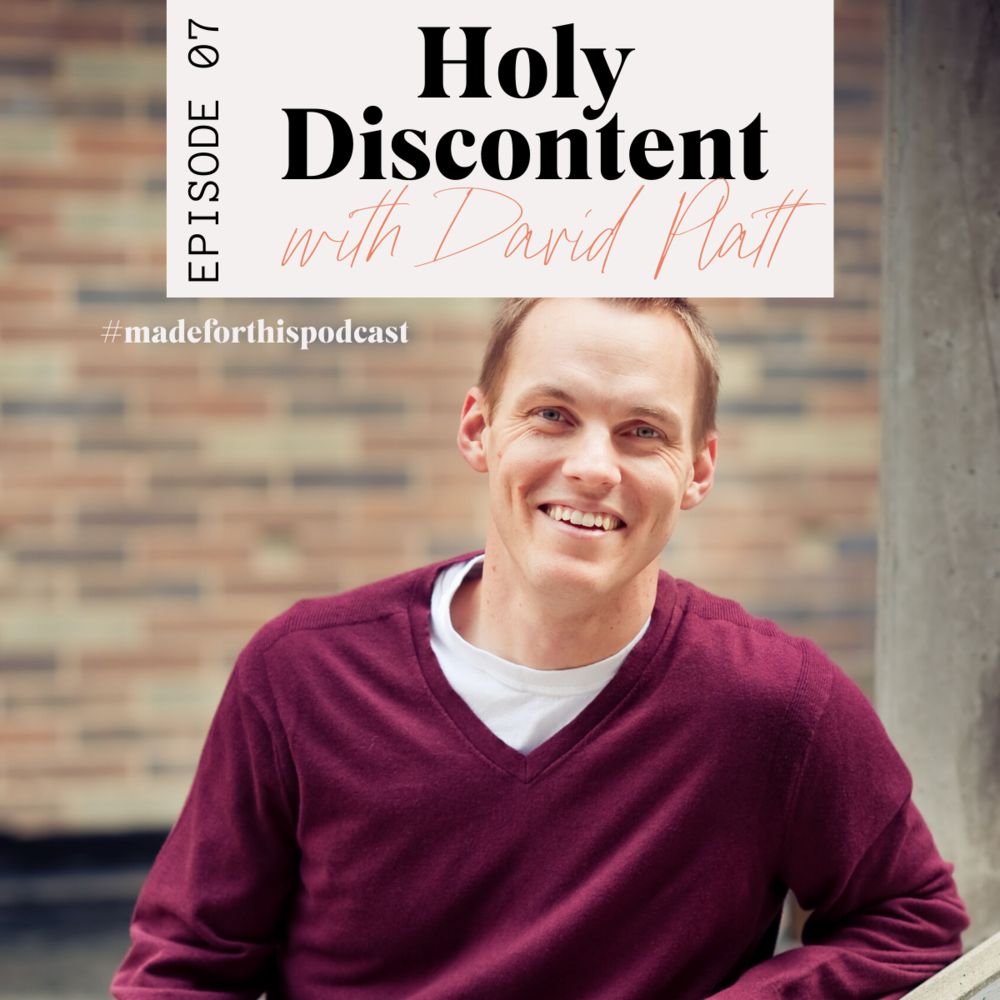 I'm really excited to sit down and talk with my friend David Platt. In his new book, Something Needs to Change, he addresses this reality that we say we believe in as Christians and challenges us to actually live in it. When I see his urgency, I feel it, too, and I hope you enjoy this conversation with him.

David has been all over the world and has seen all different cultures. His book began as an excursion into some very unreached people groups.

"The book is basically a compilation of different tracks that I've taken in the Himalayas and these remote villages. And more than anywhere else I've traveled in the world. those villages just represent what I can only describe as a collision of urgent, spiritual and physical need-like urgent physical need. I've done some research into these villages, and they found a couple of years ago that half of the kids were dying before their eighth birthday. I think about our four kids, one more really on the way through adoption. One of my biggest fears is something happening to one of them. I can't imagine that being an expectation for half of them and them dying of preventable diseases."

But it's not only this urgent physical need. David also saw into the depths of the intense spiritual needs of these remote places.

"Most of the people I've met in those mountains have little-to-no knowledge of Jesus. They've just never heard of God's love. If you go up to somebody on a trail and you say, Hey, what do you know about Jesus? And they say, who is that? It's like you're talking about somebody in a village nearby they haven't met yet. They have no idea who Jesus is. So this is something that needs to change. A book is just an effort to bring those trails to us to bring urgent need before us and just ask the question, 'how has God designed each of our lives to count for the spread of his grace and his goodness in a world where there's urgent need?'"

We've talked about discontentment, but I believe there is a restlessness and a discontentment that is Godly. There's something stirring in us that we need to listen to, that God has put in us to make us not settle into our comfort and into prosperity. Next, David and I talk about how God uses this holy discontent in our lives.

"Part of my hope in writing this book is to bring people face to face with what many people may not see. All of a sudden we can start to have our eyes opened to urgent need right around us. It may not look exactly the same as it does in those Himalayan mountains, but we're surrounded by need right around us if we'll open our eyes to it. Once we do, there is this, what I hope is, Godly discontentment that rises up in us. Once we dare to open our eyes to need right around us, we can't be the same. Part of my aim in the book is not just to say, 'Hey, here's the need' in a way that leaves us really heavy, but with hope. God has designed every one of our lives to be a part of making his goodness and his grace known amidst urgent need."

I think encountering this kind of urgent need can be scary. We are opening ourselves up to something that sounds really depressing and heavy, but I have felt more excited and hopeful in engaging that than I have in pretending that it isn't happening. David and I talk next about the hope we have in Christ that meets all needs.

"After four or five days in the trails, we finally meet a small group of believers and this little church on the side of a mountain. In this little house, they're gathered together, just all ages crammed in this little room, and the look on their faces is because of the hope they found in Christ. And things have gotten harder for them as a result. They're not allowed to use the village water source now that they're a follower of Jesus because they're seen as introducing another foreign God into the village. But then to see the way they're caring for each other and the way they're fighting, even among those who are persecuting them."

Seeing how these believers in this village were living out this hope was humbling. David shares how their team got to share God's love in bigger ways there.

"I just got back a few months ago from a trip on these trails, and we were in this art therapy class for these girls who've been rescued out of trafficking. I mean there's an eight year old girl in there, which is just so humbling, but to see the smiles on their faces, to see girls who had been rescued out of that, that's what I live for. I want to live to see that kind of hope spread, that kind of joy spread. This is better than the prosperity and the possessions. I look at the faces around that art therapy class,  and I think, 'now that's a good way to spend money.'"

Next, we dive deeper into what church looks like for these villagers.

I know you might be reading this right now because you want to be free. You want your life to count. You're zealous. You're not checked out. David and I talk a bit about what a life like that looks like and what it might cost.

"God has designed us for so much more than this nice, comfortable Christian spin on the American dream. And God has put his very Spirit in us to make this a reality, but at the same time, it doesn't come easy. There is an adversary who does not want our lives to count. There's an adversary who wants us to just coast."

So what does living a zealous life look like for us? 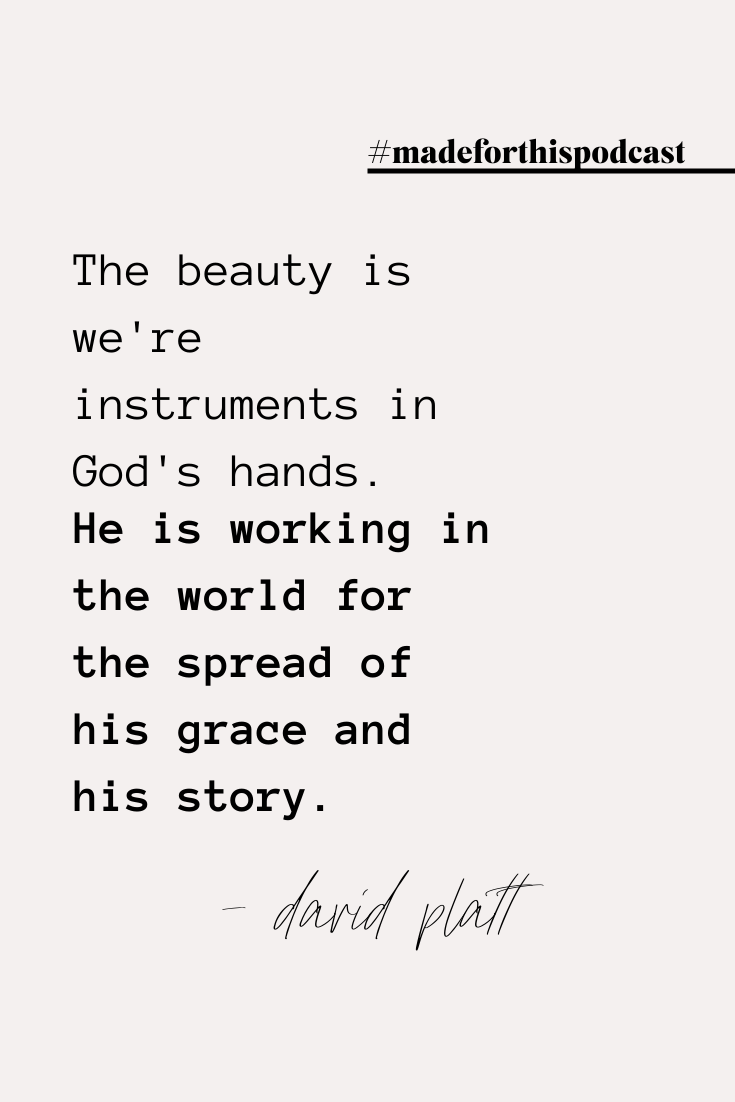 "Here's the words that came to my mind, urgent, humble action. Change doesn't just happen in the world around us. Our lives don't count just through thinking or just through talking, but through acting. So how do we need to act? With humility. So humble action. It's not a let's pull up our bootstraps and let's see what all we can do.  The beauty is we're instruments in God's hands. He is working in the world for the spread of his grace and his story. We're just putting ourselves up on the table before him and saying, 'God, whatever you want me to do. My life is yours to spend, my money is yours to spend, my time is yours to spend. I'm not calling the shots.'"

So what action is it that we need to be taking?

"People's greatest need is to be reconciled to God. The only way that can happen is through the gospel. We can meet the most urgent need in people's lives today by sharing the gospel with somebody else. So it doesn't have to be some grand thing. And the reality is, that's where I think that is the humble part of the action. We realize the massive needs in the world are not actually on my shoulders. Ultimately they're on God's. At the same time, we are to realize God has called each of us to play a part. And so then to ask the question, 'God, what part are you calling me to play?'"

I do think this conversation in our flesh can lead toward legalism or martyrdom, and it can build a really pious person. But like David said, it's ultimately the humility in saying, God, I trust you. I'm going to let you carry the world, and I'm going to do my part. I have seen so much joy as we have surrendered to God and gone on adventures in obeying Him.

I want to end with hearing from David on his hope for the next generation.

"We have been entrusted with much and by God's grace. What I wrestle with probably most coming out of those mountains in the Himalayas is, why was I not born in one of those villages? Why have I never had to worry about clean water or why have I heard the gospel practically my entire life? I do know this, I've been given grace like this for a reason. And it's not to turn a blind eye or deaf ear to a world that is in need of growth like this. I have been given grace, and I have opportunities unlike almost anybody in history to make his grace known in the world. I want to fully steward that. And so that's my hope. My hope is that our eyes would be opened. If we can trust Jesus with our lives for eternity, surely we can trust him with our lives on this earth, and not only to trust him with our lives, but to trust him to satisfy us every step of the way."