Who Needs Legs When You Have Wings? 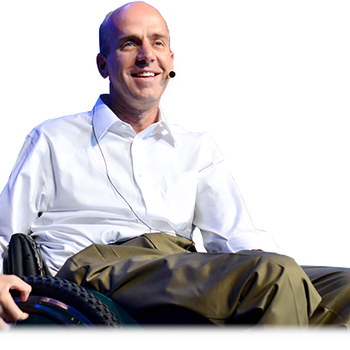 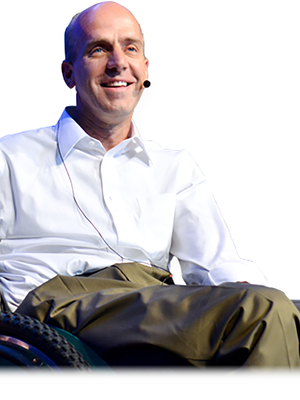 At the age of 27, Chad Hymas' life changed instantaneously when an accident left him a quadriplegic. Since that time Chad has been recognized by the state of Utah as the Superior Civilian of the Year. He is the president of his own communications company and an internet marketing company.

At 37 years of age Chad is the one of the youngest ever to receive the CPAE award and be inducted into the National Speaker Hall Of Fame. As a member of the National Speakers Association Chad spoke at over 220 events last year. He travels as many as 300,000 miles a year. Last year Chad spoke in 5 new countries on 4 continents, to hundreds of professional and civic organizations such as Wells Fargo, Blue Cross Blue Shield, AT&T, Rainbird, IHC, American Express, Prudential Life, Vast FX, Zion Securities, and others.

Chad is married and he and his wife are the proud parents of three children. They currently reside in Rush Valley, Utah on a 200-acre wildlife preserve. Chad is a world-class wheelchair athlete enjoying basketball, wheelchair rugby, hang-gliding, and snow skiing. In July 2003 Chad set a World Record by wheeling a personal marathon of over 500 miles from Salt Lake City to Las Vegas. Chad is also the author of the regionally best-selling book Doing What Must Be Done.

Chad Hymas will not only inspire, motivate, and move your audience He will create an experience that will touch their hearts for a lifetime. Chad's topics focus on the areas of Leadership, Teambuilding, Customer Service, and Mastering Change!