The Lighter Side of Politics 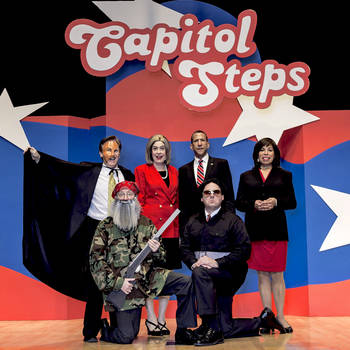 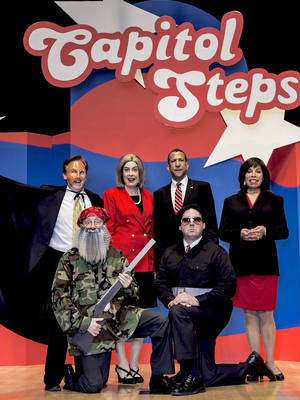 Over 30 years ago, the Capitol Steps began as a group of Senate staffers who set out to satirize the very people and places that employed them. In the years that followed, many of the Steps ignored the conventional wisdom ("Don't quit your day job!"), and although not all of the current members of the Steps are former Capitol Hill staffers, taken together the performers have worked in a total of eighteen Congressional offices and represent 62 years of collective House and Senate staff experience.

Steps on the Capitol Since they began, the Capitol Steps have recorded over 35 albums, including their latest, Orange Is the New Barack. They've been featured on NBC, CBS, ABC, and PBS, and can be heard twice a year on National Public Radio stations nationwide during their Politics Takes a Holiday radio specials.

The Capitol Steps were born in December, 1981 when some staffers for Senator Charles Percy were planning entertainment for a Christmas party. Ronald Reagan was President when the Steps began, so co-founders Elaina Newport, Bill Strauss and Jim Aidala figured that if entertainers could become politicians, then politicians could become entertainers! Their first idea was to stage a nativity play, but in the whole Congress they couldn't find three wise men or a virgin! So, they decided to dig into the headlines of the day, and created song parodies & skits which conveyed a special brand of satirical humor that was as popular in Peoria as it was on Pennsylvania Avenue.

Most cast members have worked on Capitol Hill; some for Democrats, some for Republicans, and others for politicians who firmly straddle the fence. No matter who holds office, there's never a shortage of material. Says Elaina Newport, "Typically the Republicans goof up, and the Democrats party. Then the Democrats goof up and the Republicans party. That's what we call the two-party system."

Although the Capitol Steps are based in Washington, DC, most of their shows are out-of-town or for out-of-town audiences, whether it's the National Welding Supply Association, a University audience, High Schoolers, or State Legislators. In fact, the Capitol Steps have performed for the last 5 Presidents (6, if you include Hillary). The only complaints the Steps seem to get are from politicians and personalities who are not included in the program!

No matter who or what is in the headlines, you can bet the Capitol Steps will tackle both sides of the political spectrum and all things equally foolish. What more would you expect from the group that puts the "MOCK" in Democracy?!