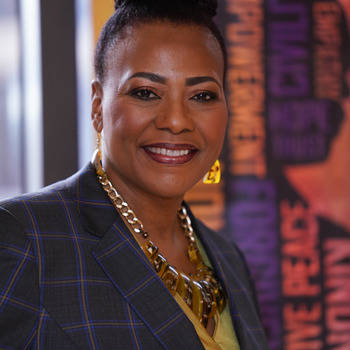 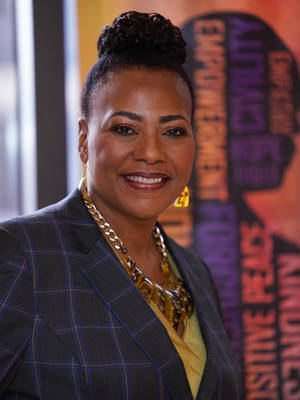 Dr. Bernice A. King is a global thought leader, orator, peace advocate, and Chief Executive Officer of the Martin Luther King, Jr. Center for Nonviolent Social Change (The King Center), which was founded by her mother, Coretta Scott King, in 1968. She was appointed CEO of The King Center in January 2012, by the Board of Trustees. From this position, the same one once held by her mother, this transformative
leader steadfastly continues her efforts to advance her parents' legacy of Kingian Nonviolence, which Dr. King re-branded Nonviolence365 .

Through her work at The King Center, Dr. King educates youth and adults about the nonviolent principles modeled by her parents. In 2012, she implemented the Camp N.O.W. Leadership Academy which has engaged youth from New Mexico, South Carolina, Michigan, Alabama, and as far away as the Island of Cyprus. Because of the impact the camp, now called Camp NOW, had on their lives, youth from Cyprus returned two years in a row.

Dr. King spearheaded the 'Let Freedom Ring and Call to Action' event to commemorate the 50th Anniversary of the March on Washington and her father's famous 'I Have a Dream' speech. This global event included then President Obama, former Presidents Clinton and Carter, and members of Congress, as well as many other international leaders, dignitaries and entertainers.

As part of the Center's Nonviolence365 education and training initiative, Dr. King launched Students with King, which enables students to interact with King family members, as well as those who knew and/or worked with Dr. Martin Luther King, Jr. and Mrs. Coretta Scott King. As part of the interactive conversation, which is typically moderated by either a local radio or TV on-air personality, students are
given the opportunity to learn about the more personal side of the King Family and Legacy. Dr. King also launched a series of interactive web-talks with students throughout the country using Google Hangout as the platform. These talks enable her to use technology to converse with students while she is at The King Center and the students are in their classrooms.

After the tragic death of Michael Brown at the hands of law enforcement, Dr. King led The King Center team in engaging educators, law enforcement, civic leaders, activists, gang members and business leaders in the Ferguson community in dialogue and Nonviolence365 training. The Center's work in Ferguson included a 4-day education and training for adults and a 4-day education and training for students and faculty at Riverview Gardens High School. Participants were encouraged to commit themselves to embracing nonviolence as a lifestyle. The work in Ferguson, MO continues, and the requests for Nonviolence365 education and training continue to pour into The King Center.

Under Dr. King's leadership, the Center has expanded and enhanced its community engagement to include partnering with the Urban League of Atlanta to provide Nonviolence365 experiences for 100 ex offenders and to encompass launching the Better Together: Racial Reconciliation initiative for pastors and church leaders. Dr. King also led a King Center team in partnering with Ujamaa Place in St. Paul,
Minnesota to provide Nonviolence365 for 120 youth and adults in the community that was home to Philando Castile. Further, in an effort to build relationships between community and law enforcement and to decrease incidents of police brutality, The King Center, under Dr. King's leadership, facilitates Nonviolence365 for Law Enforcement. Participants in NV365 Law Enforcement trainings have included chiefs, sheriffs and captains from metro Atlanta departments, as well as directors for agencies such as the Georgia Bureau of Investigation. The Center received certification from the state of Georgia to accommodate participants receiving training credit for attending NV365 for Law Enforcement.

Dr. King also initiated the Beloved Community Talks to begin having courageous conversations about the difficult racial issues impacting our communities, nation and world. The first was entitled 'The Race Factor: The Lies, The Myths and The Truths' and was held as part of its 2015 King Holiday Observance. The next year's KHO Beloved Community Talk was 'The Race Factor: Rights vs Responsibilities,' and
in 2017, the focus was 'Let's Bridge the Racial Divide Across Urban, Suburban and Rural America.'

In addition to expanding and enhancing The King Center's Nonviolence365 Education and Training Platform, Dr. King has focused her efforts on transforming the physical King Center campus. She began by using technology to add the sound of her parents voices to the campus experience. When you visit the Center, you not only get to see and read their words, you get to hear their voices. From quotes on the walls and the walkway landing to the restoration of the reflecting pool where the crypts of Dr. Martin Luther King Jr and Mrs. Coretta Scott King are housed, the campus is being revived.

Prior to taking on her role at the Center, Dr. King was already nationally and internationally known as one of the most powerful, motivating and life-changing orators and speakers on the circuit today. She began her oratorical journey when she spoke in her mother's stead at the United Nations at age 17. Over the years, she has spoken on the steps of The Lincoln Memorial, The White House, major corporations and universities, and in nations throughout the world, including South Africa, Germany, and New Zealand.

Dr. King is a graduate of Spelman College with a Bachelor of Arts in Psychology and of Emory University, with a Masters of Divinity and Doctorate of Law. She has also received an honorary Doctorate of Divinity degree from Wesley College. In honor of her mother, Coretta Scott King, she returned to her alma-mater, Spelman College, to announce the establishment of the Be A King Scholarship. Dr. King is currently a member of the State Bar of Georgia and a trained mediator. She is a member of the International Women's Forum, National Council of Negro Women and Leadership Atlanta's Class of 2020.

With a strong concern for youth, family and community partnership, Dr. King was privileged to serve as a law clerk in the Fulton County Juvenile Court system, under Judge Glenda Hatchett, who was host of the nationally syndicated 'Judge Hatchett Show.' She has served as a mentor and advisor to the Coretta Scott King Young Women's Leadership Academy (CSKYWLA). In 2014, Dr. King was delighted to serve as the high school commencement speaker for the inaugural graduating class of young ladies who she first
met in 2007 when they were in the 6th grade. In January of 2011, she launched the "100 Days of Nonviolence" campaign at CSKYWLA to expose the girls to nonviolence as modeled by Dr. Martin Luther King, Jr. (Nonviolence 365), and to encourage them to begin embracing it as a way of life.

Dr. King has been featured on numerous television shows, in magazines, as a television commentator and is the recipient of a host of awards and accolades. In April 2008, she was one of the fifteen delegates selected to meet Pope Benedict XVI during his visit to the United States. On March 12, 2018, while being honored by the Center of Gandhi in Montelone di Puglia, Dr. King was privileged to have a private meeting with Pope Francis at the Vatican. In 2019, she was invited to participate in the World Summit of Nobel of Peace Laureates in Merida, Mexico. Just recently she was honored by the Congressional Black Caucus Foundation with the Co-Chair Phoenix Award. A noted author, she has to her credit, 'Hard Questions, Heart Answers,' a compelling and inspiring book.

Dr. King is an innovative, energetic and committed leader dedicated to taking her parents' legacy and teachings, The King Center, and the work of creating a more peaceful, just, humane world with Nonviolence365 into a new era.