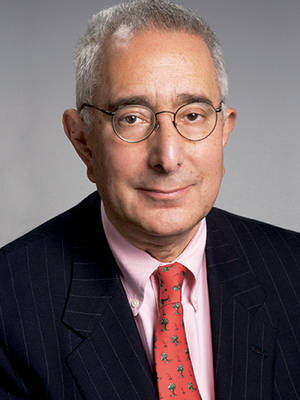 But in real life, off screen, Ben Stein is a compelling, extremely humorous speaker about economics and politics and daily life in America. And, he really is an award winning, best selling, economist and lawyer and teacher (but funny and lively in real life). Ben Stein, who studied economics at Columbia and Yale and law at Yale under some of the most famous economists and jurists in the nation, has written path-breaking analyses of how finance works, what motivates business decision making, what causes economic crises, and what resolves them.

He has been a columnist and analyst of economic and legal and cultural behavior for The Wall Street Journal, for The New York Times, Fortune, The Washington Post, Yahoo Finance and many other publications.

In 2009, he won the Malcolm Forbes Award for Excellence in Financial Writing.

He is also the author of dozens of books about economics and finance, the last several of which were New York Times best sellers (Yes, You Can Time Market; Yes, You Can Still Retire Comfortably; and The Wiley Little Book of Bulletproof Investing. The Wiley Little Book of Alternative Investments, among others. His books on finance in the last several years were co-written with the distinguished and much sought after asset manager Philip DeMuth.

He is a regular contributor to Fox News, a long time commentator on CBS Sunday Morning, and a very frequent guest on CNN.

He also writes a very long running column for The American Spectator and has been writing for years for NewsMax.

As noted, he is an extremely frequent speaker to powerful groups of business and finance leaders, as well as to charitable and scholarly groups, where his skill is making even economics funny and touching and understandable. His father, Herbert Stein, was known as the most humorous of economists and Ben follows in his footsteps.

But what really sets him apart is that he has also had a major career as a writer and performer in Hollywood. In addition to his work in "Ferris Bueller's Day Off,"
Stein also played a teacher for three years on "The Wonder Years," and was host and contestant for almost 1,000 episodes of "Win Ben Stein's Money" in Comedy Central, for which he and co-host Jimmy Kimmel won an Emmy for best game show host. (The show itself won 7 Emmy's.)

He was also host of the talk show, "Turn Ben Stein On," on Comedy Central, and co-host of "Star Search" for three years on CBS and co-host of "America's Most Smartest Model" on VH-1. And he wrote numbers of screenplays and teleplays, some of them highly award-winning.

He was an adjunct teacher about economics, politics, and culture at American University, The University of California at Santa Cruz, and Pepperdine University.

He was a speechwriter in The White House for Richard M. Nixon and for Gerald R. Ford. He has been closely involved with the recent George W. Bush administration and, through his father, the well known economist, Herbert Stein, has had a pipeline into the inside of Washington since the Eisenhower Administration.

He is extremely involved in bringing recognition and family recovery to the surviving spouses and orphans and parents of American warriors killed in the
fights against terrorism. This has been a major commitment in his life.

He lives in Washington, DC and Southern California with his wife of 43 years, Alexandra Denman, four dogs and eight cats (all rescues) and a fish.