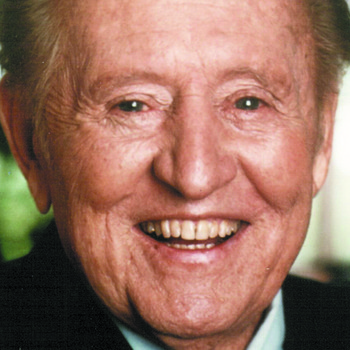 At 96 years old, Art Linkletter isn't slowing down. The Wall Street Journal recently ran an excellent feature on the entertainment icon. The full article, which was written by fellow PSB exclusive Stephen Moore, is available at WSJ.com.

At 17, the future TV host, entrepreneur, philanthropist and missionary was working on Wall Street as a typist at an investment bank and sleeping at the YMCA. "Oh yes, I remember Oct. 29, 1929. Everybody was crying and weeping and my boss had just lost his house and this was the start of the Depression. A month later I was fired."

He went back to school, attending a small college in San Diego, where he made a name for himself as a basketball player but more importantly as an on-campus entertainer. His big breakthrough came in 1931, when "the phone rang and a man said: 'How would you like to be on the radio?' . . . And a couple of years later, I was the program director of the station." Soon thereafter, his career took off. He was one of the few voices of national radio to make a smooth transition to TV. One of his fabulously successful shows, "House Party," was a variety talk show simulcast over radio and CBS TV five days a week for many years. This, and his nighttime show "People Are Funny," made him one of the most recognizable faces on TV for three decades. "I was Oprah before there was Oprah," he says with no false modesty.

His special talent was to get children to open up and say funny things. "I asked one boy what religion he is. The kid replied, 'I always forget whether we are Catholic or prostitute.'" In all, he interviewed 27,000 children. He hands me an autographed copy of "Kids Say the Darndest Things," his mega-bestseller first published in the 1950s, and tells me that once a gray-bearded gentleman with a cane approached him and said, "I appeared on your TV show when I was 6 years old." Mr. Linkletter loves to guffaw at his own stories. And he is funny about everything.

Read the entire article at www.WSJ.com.

For information on how to bring Art Linkletter to your next event, visit ww.premierespeakers.com/art_linkletter.

Want Art Linkletter for your next event?

At 96 years old, Art Linkletter isn't slowing down. The Wall Street Journal recently ran an excellent feature on the entertainment icon. The full article, which was written by fellow PSB exclusive Stephen Moore, is available at WSJ.com. Here's an excerpt: At 17, the future TV host, entrepreneur, philanthropist and missionary was working on Wal...
Read More