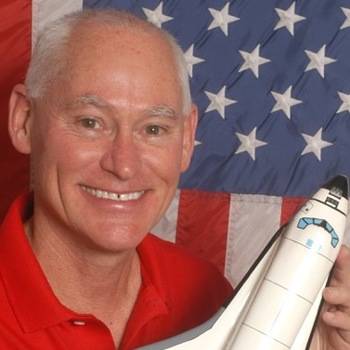 It was good to see the news coverage given to Apollo 11’s 50th anniversary.  Many of the stories included testimonials from individuals on their memories of the event; and many of those began with, ‘I remember exactly where I was when Neil Armstrong landed on the moon.’  It was an event of such enormous significance to human history that even people with little or no interest in the space-race were indelibly marked with the memory.  So, why is it that I, a retired astronaut, have no such memories?

As Armstrong’s boot touched lunar soil, I was deep into my Vietnam tour.  In fact, on the day of that first step, I was flying a photo-reconnaissance combat mission.  I cannot recall any memory of being personally invested in that historic moment.  None whatsoever. It’s as if the most important page in the book of my space-life is missing.  The story only resumes a day or two later, when I see news of the lunar landing in a Stars and Stripes newspaper in the squadron operations office.

That blank is particularly baffling to me since I was NASA’s number one fan throughout my youth.  If you read my memoir, Riding Rockets, you will see that my space credentials were gold-plated.  I lived and breathed the space race, watching every mission, reading every newspaper and magazine article on the successes and failures of both the American and Russian programs.  I can tell you exactly where I was when Alan Shepard became the first American to fly into space (late for school, in my parent’s living room with my mom and dad).  Similarly, I can eidetically recall watching John Glenn become the first American to orbit the earth...as well as all the other firsts of NASA’s manned and unmanned programs.  Quick...where were you when Viking I became the first manmade object to make a soft landing on Mars and return photos of the Marian surface?  I know when and where I was.  It was the 7th anniversary of Apollo 11, July 20, 1976, and I was in my Edwards AFB home, dancing a jig in front of the TV, fist-pumping and trying not to wake up the kids and Donna with my cheering.  My space-geek meter has always been pegged, except for the moment of the greatest first of all...Neil Armstrong’s step onto the moon.  How is that possible?

Answer...the realities of war.  One such reality was the lack of instant news sources in Vietnam.  I never saw a TV during my tour.  And I don’t recall any radios in the squadron area.  But it was more than just this lack of communication. There were much greater distracting realities.

As I said, the day that Neil made his famous footprint, my flight records reveal I was flying a combat mission.  If not actually in the air at that historic space-history moment, planning and debriefing the mission would have consumed a significant portion of the day.

Or, when the first lunar step was taken, was I rushing to finish a letter to Donna? (The postal service was the only form of communication we had in 1969...no Skype or cell phones. And one of the perks of the war was that we could send a letter home for free...no 6-cent stamp required!)

Or, maybe Neil’s accomplishment was displaced by receipt of a letter from home, for certainly there was no greater thrill for a Vietnam-deployed serviceman/servicewoman than receiving a letter from loved-ones.  Maybe my eyes were devouring a recent photo of our sixteen-month-old twins, Pat and Amy.  I was worried about Amy.  Donna’s concern for her health was bleeding through her pages.  Amy had been in and out of the doctor’s office for a recurring kidney infection. (Ultimately, my combat tour would be cut a month short to allow me to fly home to be with Donna while our daughter underwent reconstructive surgery on her kidney plumbing.)

Or, maybe my brain had no room for Neil’s first step because I was dealing with the news of another of my West Point classmates being KIA.  Thirty of my classmate’s names are etched on the Vietnam Wall.  The war didn’t stop for Apollo 11, a fact forgotten in the euphoria of the 50th-anniversary celebration.  In the month of July alone, 537 Americans were KIA.

When you are at war, any war, the rest of the World and even its most significant moments pale to invisibility.  You enter a different Cosmos altogether, a place more remote than Neil’s Moon.  Maybe that’s why Vietnam GIs referred to their repatriation to the USA as ‘Getting on the freedom bird and flying back to the World.’  The moon landing was happening in that World, not in mine.

But none of this diminishes what Apollo 11 means. It was the greatest engineering accomplishment in the history of mankind and a monument to American exceptionalism. And I was privileged to be a witness to it...even if a distracted one.

To book Mike Mullane for your next event, visit his profile at https://premierespeakers.com/mike_mullane.

Mullane is the author of Riding Rockets: The Outrageous Tales of a Space Shuttle Astronaut. To order copies in bulk for your event, please visit Bulkbooks.com.

Want Mike Mullane for your next event?

It was good to see the news coverage given to Apollo 11's 50th anniversary. Many of the stories included testimonials from individuals on their memories of the event;and many of those began with, 'I remember exactly where I was when Neil Armstrong landed on the moon.' It was an event of such enormous significance to human history that even peopl...
Read More

Article from CBSNews.com by Chip Reid Watch the Interview Here (CBS News) CHANTILLY, Va. - There were cheers and some tears as the shuttle Discovery made its final flight on Tuesday. It took off at sunrise from the Kennedy Space Center in Florida, flying piggyback on a 747. Later it flew over Washington, past the monument and the Capitol,...
Read More