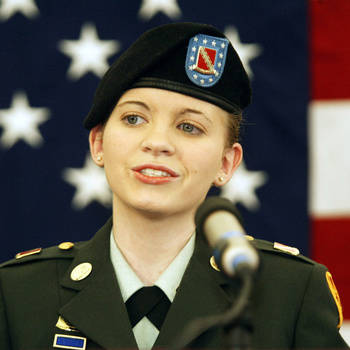 On July 22, 2003, U.S. Army Private Jessica Lynch, a prisoner-of-war who was rescued from an Iraqi hospital, receives a hero’s welcome when she returns to her hometown of Palestine, West Virginia. The story of the 19-year-old supply clerk, who was captured by Iraqi forces in March 2003, gripped America; however, it was later revealed that some details of Lynch’s dramatic capture and rescue might have been exaggerated.

Lynch, who was born April 26, 1983, was part of the 507th Ordnance Maintenance Company from Fort Bliss, Texas. On March 23, 2003, just days after the U.S. invaded Iraq, Lynch was riding in a supply convoy when her unit took a wrong turn and was ambushed by Iraqi forces near Nasiriya. Eleven American soldiers died and four others besides Lynch were captured.

Lynch, who sustained multiple broken bones and other injuries when her vehicle crashed during the ambush, was taken to an Iraqi hospital. On April 1, she was rescued by U.S. Special Forces who raided the hospital where she was being held. They also recovered the bodies of eight of Lynch’s fellow soldiers. Lynch was taken to a military hospital in Germany for treatment and then returned to the United States.

Lynch’s story garnered massive media attention and she became an overnight celebrity. Various reports emerged about Lynch’s experience, with some news accounts indicating that even after Lynch was wounded during the ambush she fought back against her captors. However, Lynch later stated that she had been knocked unconscious after her vehicle crashed and couldn’t remember the details of what had happened to her. She also said she had not been mistreated by the staff at the Iraqi hospital and they put up no resistance to her rescue. Critics–and Lynch herself–charged the U.S. government with embellishing her story to boost patriotism and help promote the Iraq war.

In August 2003, Lynch received a medical honorable discharge. She collaborated on a book about her experience, I Am a Soldier, Too: The Jessica Lynch Story, which was released later that year. In April 2007, Lynch testified before Congress that she had falsely been portrayed as a “little girl Rambo” and the U.S. military had hyped her story for propaganda reasons. According to Lynch: “I am still confused as to why they chose to lie and tried to make me a legend when the real heroics of my fellow soldiers that day were, in fact, legendary.” She added: “The truth of war is not always easy to hear but is always more heroic than the hype."

Want Jessica Lynch for your next event?

On July 22, 2003, U.S. Army Private Jessica Lynch, a prisoner-of-war who was rescued from an Iraqi hospital, receives a hero's welcome when she returns to her hometown of Palestine,West Virginia. The story of the 19-year-old supply clerk, who was captured by Iraqi forces in March 2003, gripped America; however, it was later revealed that some de...
Read More

Written by Fox News Insider Staff Former prisoner of war Jessica Lynch was on "Huckabee"; last night to discuss Iraq, the death of one of her rescuers, and her involvement in a new faith-based film. Lynch was captured in Iraq during a raid on March 23, 2003, and she was held for nine days until a Special Forces team rescued her. She was the ...
Read More

Written by Angel Canales It was back in March 23, 2003, just three days after the start of the Iraq War, when Private First Class Jessica Lynch's unit was ambushed in Nasiriyah, Iraq. Lynch was only 19 when she was captured, badly injured and raped by Iraqi forces and held hostage for nine days before her dramatic rescue by US Rangers on April ...
Read More