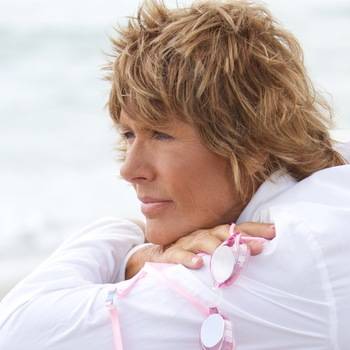 It’s been just one month since Diana Nyad completed a 53-hour and 110-mile swim from Cuba to Florida that made her the first person in history to swim that route without a shark cage, so where is she going now?

The answer is, right back into the water.

Nyad, 64, who spent over 30 years chasing her dream to complete that swim, says she took 10 days off from swimming, and relied on a milkshake diet thanks to lacerations in her mouth, before getting back in the water, slowly, for her, at first, just an hour at a time.

Starting next week, Nyad will be swimming for 48 hours straight right in the heart of New York City, in a specially designed pool in Herald Square next to the famed Macy’s department store.

“I went to Proctor & Gamble [a sponsor] and said, ‘I want to do something for Hurricane Sandy.  I want to get a pool built right in the middle of New York City,’ and they said, ‘Okay,’” Nyad told ABCNews.com

Nyad will start swimming Tuesday, Oct. 8, at 8:40 a.m. and will not stop until 48 hours later, on Thursday.  The money raised during her marathon swim will go directly to Superstorm Sandy survivors through Nyad Swim for Relief via AmeriCares.

“It’s mainly to let the people know we haven’t forgotten about them,” Nyad said.  “It’s a year later and it’s not on the front page of the newspaper but those people [Sandy survivors] haven’t forgotten.”

Construction is underway now on a 120-foot long, two lane, 42,000 gallon custom pool in Herald Square that will let New Yorkers and tourists get a glimpse of the type of heroic determination Nyad uses to power through her swims.

While Nyad made her Cuba to Florida swim alone in the water, this time around this time around she’ll have a number of friends swimming alongside her, although only she will swim the whole 48 hours.

She’ll also be joined by firefighters, Sandy survivors and anyone else who wants to dive in for the cause.

“We have a 3-year-old and I think even a seeing-eye dog,” Nyad said.

Only one of Nyad’s supporters, however, will be wearing a custom-made, one-piece swimsuit featuring nearly 300 Swarovskicrystals and a crystal swim cap.  That would be Richard Simmons, who will swim with Nyad on Wednesday and then auction his swimsuit and cap to benefit AmeriCares Sandy fund.

“I’m going to be surprised,” Nyad said of Simmons’ outrageous swimwear.  “But I mean, how cool is it going to be when I do my open turn and I look in the eyes of Ryan Lochte or Richard Simmons? It’s going to give me a lot of strength.”

Nyad plans to take a 30-second break every 90 minutes to hydrate and eat.  She won’t stop swimming though, just tread water in place.  Without the breaks, and swimming at her regular pace, Nyad estimates she would cover around 98 miles during the 48-hour swim.

By her “regular pace,” Nyad means the pace she swam from Cuba to Florida, not the pace 11-time Olympic medalist Lochte is used to swimming.

For information on how to book Diana Nyad for your next event, visit premierespeakers.com/diana_nyad.

Want Diana Nyad for your next event?

October 07, 2013
Written by Katie Kindelan It's been just one month since Diana Nyad completed a ...
Read more

September 24, 2013
Press Release Fresh off her record-breaking swim from Cuba to ...
Read more

September 03, 2013
Diana Nyad has become the first person to swim from Cuba to Florida without ...
Read more

Written by Katie Kindelan It's been just one month since Diana Nyad completed a 53-hour and 110-mile swim from Cuba to Florida that made her the first person in history to swim that route without a shark cage, so where is she going now? The answer is, right back into the water. Nyad, 64, who spent over 30 years chasing her dream to complete t...
Read More