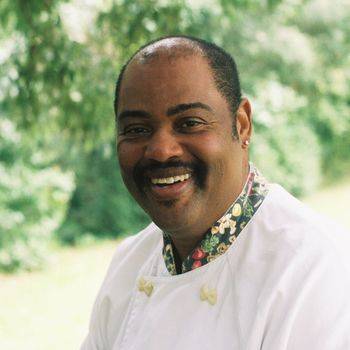 Below is a recent article on Curtis Aikens from Bloomberg Businessweek:

After weaving his way through a maze of living room sets with unpronounceable Swedish names, Curtis Aikens was ready. "Good afternoon, Ikea shoppers," says Aikens, in an avocado green chef's jacket, before a crowd of 10 or so customers listening to muzak and fondling sleek crock pots. Undeterred, Aikens announces with gusto, "Today, we're having fun in the kitchen!" Yet the showroom kitchen in the Emeryville (Calif.) superstore was a humble reminder of glory days past for the former celebrity chef who once commanded $450,000 a year in salary and endorsements. The previous day, Aikens led a demo by an escalator at a Sacramento Ikea. "It's called 'making it work,'" says Richard Gore, the architect behind Aikens's comeback attempt. "We'll make lemonade from lemons."

As one of the forefathers of the celebrity chef movement, Aikens, 52, once enjoyed the trappings of borderline fame. During his mid-'90s heyday, he hosted five shows (including From My Garden), met three Presidents, published several cookbooks, toured the world, and was regularly swarmed by culinary groupies. "From a strictly professional standpoint, it was gravy," says Aikens. By the Aughts, however, a new generation of coiffed, camera-ready food personalities—Tyler Florence, Rachael Ray, Guy Fieri—began to revolutionize the industry by swinging it from education to entertainment. The Food Network demanded that Aikens take a drastic salary cut in 2003. Instead, he walked—effectively ending his celebrity chef career.

Other comebacks have shown slightly more promise. After a 1971 car accident ended his hit show, The Galloping Gourmet, Graham Kerr tried to bounce back with programs on PBS, CNN (TWX), and elsewhere—all of which petered out. "I've never been able to match The Galloping Gourmet thing," says the 77-year-old. But he's still trying. Kerr is currently promoting his new book—his 29th—The Galloping Gardener. Mary Sue Milliken and Susan Feniger (Too Hot Tamales, Tamales World Tour) run several Los Angeles and Las Vegas restaurants and recently appeared on Bravo's Top Chef Masters. "I don't feel frustrated or all that unhappy," says Milliken. "On the other hand," she says, "I'd love to do it again."

Many would. The first wave of celebrity chefs built the foundation for a multibillion-dollar business that handsomely rewards people who sometimes aren't even chefs. While it's unlikely that any comeback attempt will achieve the heights of Emeril Lagasse—who, in 2008, sold his brand to Martha Stewart Living Omnimedia (MSO) for $50 million—most would settle for being the next Giada De Laurentiis. The former food stylist has created her own Italian cooking fiefdom that includes shows, books, and a line of cookware and foods sold exclusively at Target (TGT). Or at least the next Katie Lee, an abnormally attractive restaurant critic who was married to Billy Joel, hosted the first season of Top Chef, and authored two cookbooks. Or even Padma Lakshmi, who was married to Salman Rushdie, took over Top Chef from Lee, and authored two cookbooks.

All are hoping to avoid the snags that have caught some past food stars. Jeff Smith, host of the long-running series The Frugal Gourmet, had any hope of extending his brand dashed when several young men accused him of sexual assault in the late 1990s. (Smith died in 2004.) Juan-Carlos Cruz, who hosted Food Network's Calorie Commando, pleaded no contest in 2010 for attempting to hire a homeless man to murder his wife. The graver challenge for comeback chefs is the current over-saturation of a once-barren marketplace. "It's a tsunami," says former food celebrity Gordon Elliott, regarding the recent waves of young culinary talent hoping to land their own shows, book deals, condiment lines, or branded saucepans. "They grew up with Food Network, and they come camera-ready with tattoos, charisma, and an agent." Elliott, perhaps best known as the host of the 1990s program Door Knock Dinners, has reinvented his own career by adding to the problem. His food television company, Follow Productions, is the force behind Down Home with the Neelys and the entire Paula Deen oeuvre.

Thus far, Aikens's comeback trail hasn't been easy. He's taped several TV pilots, none of which has been picked up. Yet he believes the celebrity chef market is ready for its Betty White moment. And Richard Gore, a former Food Network executive, is trying to make it happen. Gore recently started Food University, a talent management company for downtrodden celebrity chefs and newcomers. "The life span of a television chef is not that long," says Gore. "You're lucky to see eight years. Most likely it's five." And where networks see faded talent, Gore sees $1,500 Ikea cooking demonstrations. "The guys who played during their heyday, they still need to work," he says. "The networks are spitting out people like Curtis and Sara Moulton, but that's O.K. because they're still talented, and I'm leveraging that asset." Elliott agrees. "I think Curtis could make a comeback," he says. "But he has to come back with a reason."

Aikens has already been refining his reason. He was completely illiterate until he was 26 and is currently earning a master's in education. Coupled with his background in fresh produce—the Michelle Obama-fueled food craze du jour—this will qualify him to teach underprivileged kids about literacy, nutrition, and cooking. Armed with this triple-threat capability, Aikens says he hopes to reach every classroom in America. "Everything is cyclical," he says. "Within the next eight years, every chef is going to tie themselves into a cause to take their brand bigger, and I'll be ready for it."

For information on how to book Curtis Aikens for your next event, visit PremiereSpeakers.com/curtis_aikens.

Want Curtis Aikens for your next event?

June 06, 2011
Below is a recent article on Curtis Aikens from Bloomberg Businessweek: After weaving his way through a ...
Read more

Below is a recent article on Curtis Aikens from Bloomberg Businessweek: After weaving his way through a maze of living room sets with unpronounceable Swedish names, Curtis Aikens was ready. "Good afternoon, Ikea shoppers," says Aikens, in an avocado green chef's jacket, before a crowd of 10 or so customers listening to muzak and fondling slee...
Read More