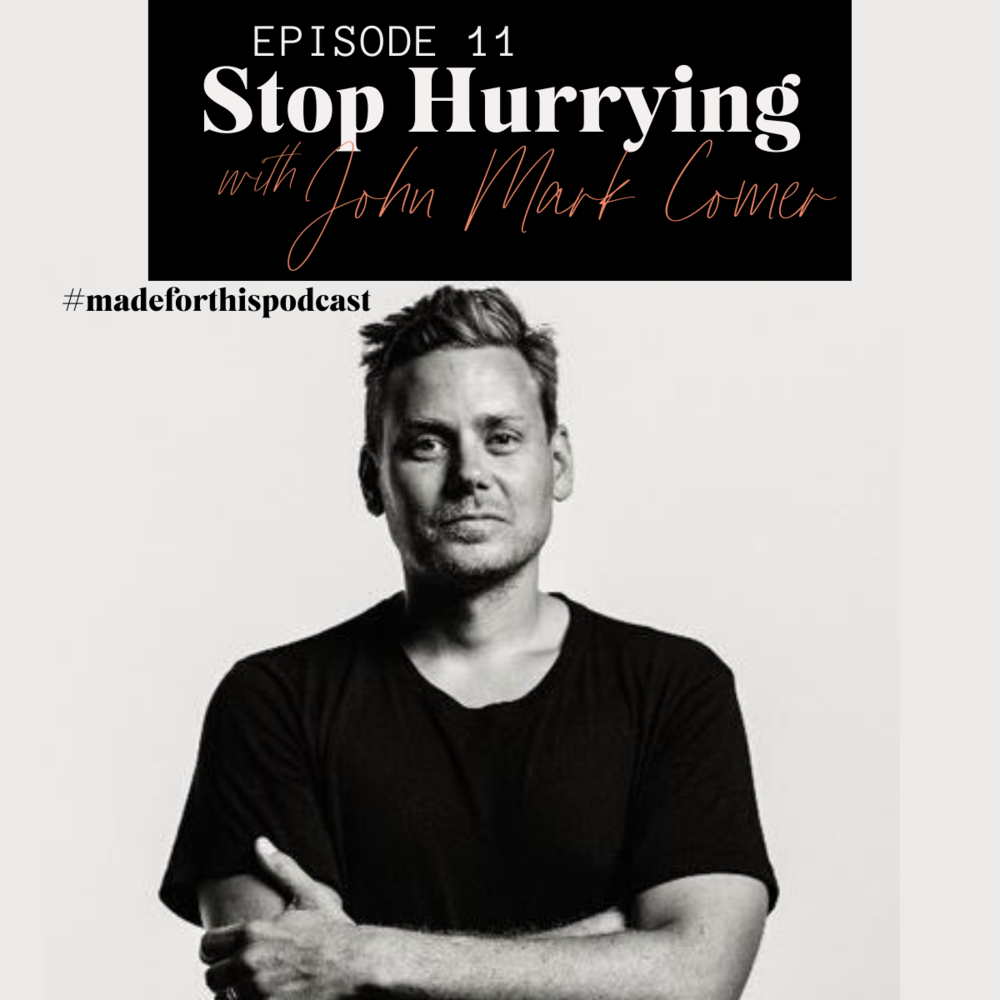 I recently sat down with my friend John Mark Comer to talk about rest in a world that loves to hurry. John Mark is a pastor in Portland, Oregon at Bridgetown church. He's also the author of a new book coming out called, The Ruthless Elimination of Hurry. We talked about all the things that play into our culture of hurry and how we can find rest in the midst of it.

The first place I want to start is with this idea of being overwhelmed and where it comes from because it's real. It's everywhere. In fact, I speak to a lot of women and I'll ask them questions sometimes. When I ask, "how many of you are anxious or overwhelmed," it's almost the whole room. So what is the problem and where does it come from?

"I mean there's no short answer to that. I think you have the kind of surface level causes that are technological. We're just barely over a decade into this little thing called the smartphone and urbanization and people living in cities and traffic. We're still only a century into the automobile, which is a blip in the human-history story. So there's the kind of surface level issues of just noise and traffic and busy-ness and the phone and digital distraction.

But then, below that, there's a human-condition thing that goes biblically back to the garden of Eden. You see this idea of overwhelm and human transgressions literally on page three of the Bible. So I think there's this kind of dual layer. There's the schedule, technology, phone, busyness, kids and soccer, that thing. But then below that, there's the whole human thing of am I enough? Am I good enough? Can I control my life? What if everything spins out of control? You know, all the deeper human undercurrents of the soul that fuel the busyness of our culture and our life."

Next, I want to talk with John Mark about some of the more radical changes he made in his life to rebuild it with more simplicity. It took pulling back from a lot of good things, which I think takes a lot of bravery and honesty. There can also be a lot of fear that can come with saying no to so much.

"Well, you know, there were fears on both sides. Leaving that kind of the mega-church, which for me was symbolic of leaving a life that was about accumulation and accomplishment and upward mobility and fast and faster and go, go, go. I'm not saying that is for all other people, but I think for me there was the fear of losing my self-worth and my identity. For several years after I left, I felt like my best years were all behind me. Actually, I felt like a drug addict coming off meth or something going through withdrawals. Hurry is a form of dopamine addiction, as is the phone and so many other things. So there were those fears of, what if I lose my voice in the kingdom of God? What if I miss God's calling on my life? It feels weird to turn down good opportunities. The lie that so many of us believe is any good opportunity is from God, which is so not true. Some of them I think are fully demonic. If the enemy can't under-promote us, he'll over-promote us before our character and rhythms of grace can sustain us.

So a lot of those were fears, but then fears on the other side were, who am I becoming? What if 30-years from now our church is huge and great and whatever, but I've lost my children or I've lost my soul or my marriage is just fidelity and nothing more? There were fears on both sides, I don't think you can live well based on fear. There's just no possible way."

My whole office listens to John Mark's sermons and podcast, and we talk about Sabbath a lot because of him. I want to talk next with John Mark about his Sabbath and why it is so important to him.

"Well, first let's talk about it being the only one of the 10 commandments that Christians in America brag about breaking. Nobody comes into church and brags about an affair that week or murder or how they lied to a client. But I regularly hear people say, "Oh, I  just worked 10 days in a row" or "I just answered 600 emails" or "I was up until two in the morning working." We brag about transgressing our limitations, you know? But I think a part of that whole process for me was coming into Sabbath. I did not grow up in a church tradition where Sabbath was even on the radar. Sabbath was like either a weird Jewish thing or for super legalistic Christians, and there's a very strong theology of what we would have called the Lord's day, which was Sunday church. But I think there was a little bit more to it than just church.

So I'll walk through a really quick theology of Sabbath. In the NIV and in most translations of the Bible, the word Shabbat is translated, to stop or to rest or to delight or to worship. And that's basically the four full movement of Sabbath right there.

We Sabbath Friday night through Saturday night, which is wonderful. So we start with a huge family dinner. We light the candles of Sabbath. We read a Psalm, I bless the children, we eat together, we do highlight of the week, and we do this big giant cookie this I stole from my sister. We throw a giant batter of cookie and a huge cast iron pan, put the whole thing in the oven, pull it back out, and then we'll dump a whole thing of ice cream on the top.We put it in the middle of the table and all dig in as we do highlight of the week."

Because he also has kids in the house, I want to hear from John Mark on what it's been like getting his kids involved in his Sabbaths. 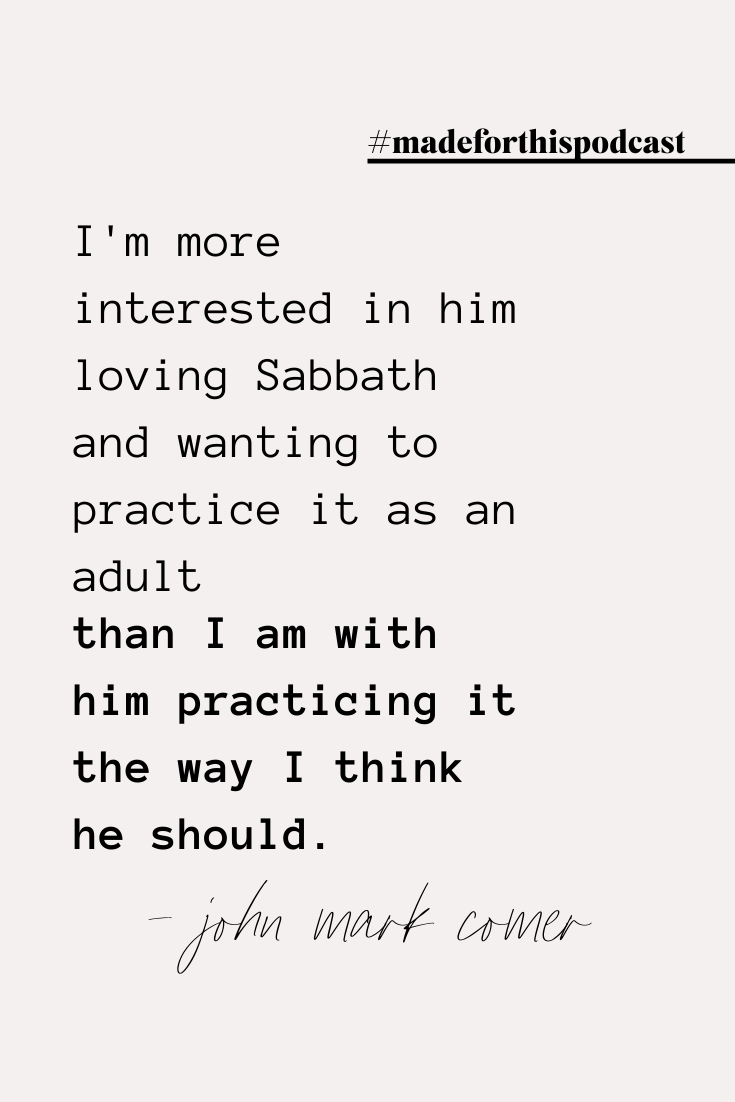 "It keeps changing. I think the hardest times for families to do it are with really little kids where you have to chase them around the house. And then with teenagers. My oldest son is the opposite of my personality. He's over the top extrovert, crazy high energy, and so his idea of Sabbath is not reading poetry on the back deck alone for four hours. So I think we're trying to create space for him. He's got a really hard school year so he's enjoying Sabbath now more than has in the last couple of years because he's so tired by the end of the week. So he loves it. But then, if he wants to go out with his friends, we totally blessed that and support that. I'm more interested in him loving Sabbath and wanting to practice it as an adult than I am with him practicing it the way I think he should. And so that means that sometimes my wife and I have to sacrifice how we would prefer to Sabbath, but we know this is the season when you have kids in the house."

I know ending the hurry in our lives can start to sound like making massive changes so I want to end with talking to John Mark about some of the small changes you can make in your lives and the rewards you'll start to see.

"Well, I think start where you're at, not where you should be. So even though Sabbath is a full 24 hour time period, and that's part of the genius of it, going from zero to 24 hours is a massive jump for a lot of people. Slowly, gently move your way in. And the benefits are just all over the place. There are relational benefits if you're in a family or at a marriage. There are emotional benefits, there are spiritual benefits, and all of this is interconnected. We're such whole people. For me, I come down to the trifecta at the center of Jesus' teachings in the gospel of John and in the writings of Paul of love and joy and peace. And they're not just emotions, they are the inner condition of the heart. They are the kind of people we become through following Jesus-people who are loving, people who are joyful, people who are at peace or a non-anxious presence. And those three dispositions require a restful, easy yoke. The goal of Sabbath is to become a restful person who lives day to day in awareness of and connection to God's presence and year over year becoming a more joyful, loving, and peaceful person.

Sabbath, like all of the other practices of Jesus, it's just a means to an end. It's a wonderful means. I thoroughly enjoy the means. It's much more pleasant than fasting or some of the other means, but it's still a means. At the end is what the early Christians called union-to be one with God."