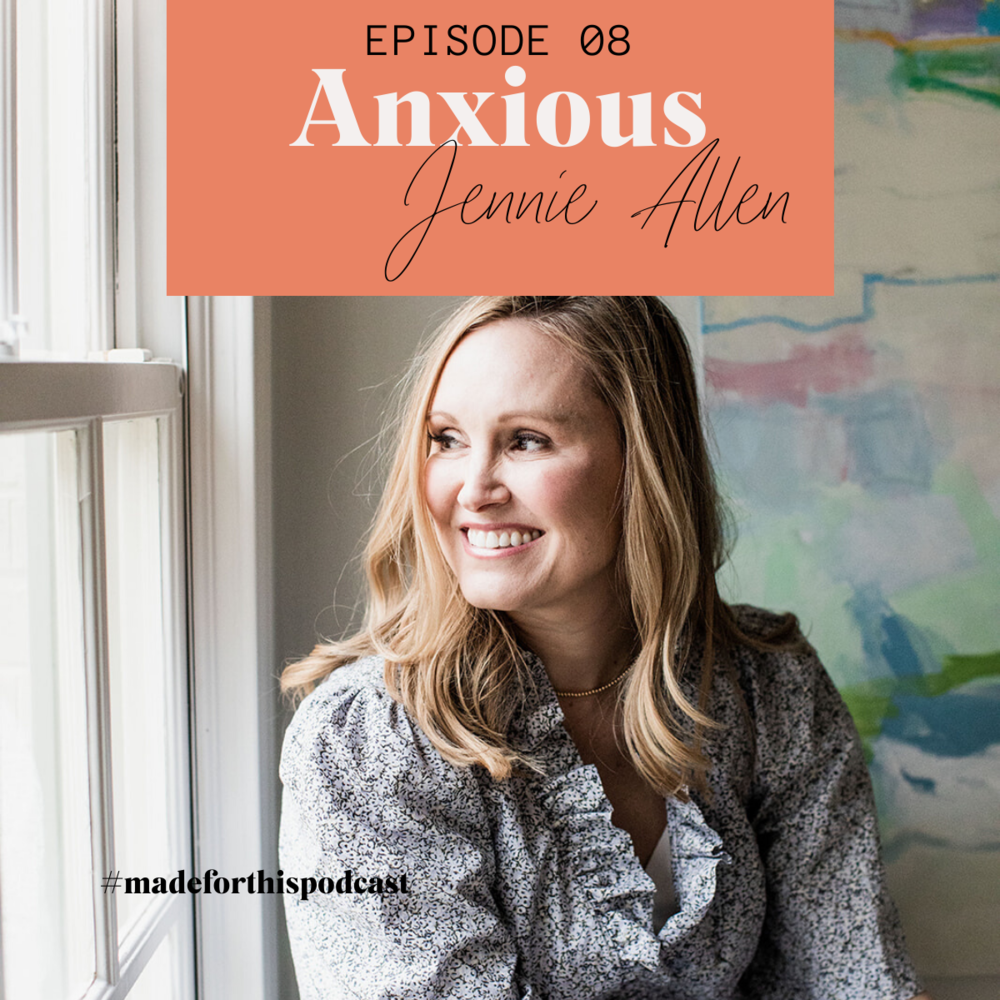 Recently, my team went through some old Bible study videos I had done years and years ago. They commented about how young I looked, but all I could think was, "I look so scared." And it's true. I was terrified. I still stand by the teaching. It is raw, and it is real, and I didn't work with scripts. I just sat there, and I taught the word of God the best I knew how. But I was scared.  I want to talk about that because I believe that there was a turning point in my life that came in that season where I was stepping out and doing what God made me to do, even though I was scared.

The Bible says over and over again do not fear. In fact, it's probably one of the most quoted commands in scripture. Why? Because life is short, heaven is coming, and our lives matter. The fear that the devil brings is the easiest way he can shut us down.

My fears aren't usually like those from a horror film, but it's the constant anxiety of approval. "What if this thing that I want so badly doesn't happen?" Anxiety grows as we fear the future and we think, I can't control it. I can't make what I want to have happen, happen. When I stepped out in ministry to do what God called me to do, I was so scared of rejection. I was so scared of things that might happen. And what is so interesting is that all my worst fears in ministry have come true. But all of the best parts of life have also come true. And I think that's where the devil gets us. It's not that he's telling us a complete lie. There's a little bit of truth. There are things to be afraid of on earth. It's just that they're not as scary when you understand who God is and what he has for us, and fear makes us miss both. Fear will make us miss the bad, perhaps, but fear is also going to make us miss the good.

What do you love?

I think it's important to think about what it is that you're tempted to love more than God. And when you can name that thing, you're going to find out what it is that you're afraid of losing. Right now, the thing that I'm tempted to love more than God is my kids and a future with them and what their futures are going to be like. I realize this is my idol right now. I'm fighting it daily of just letting go, letting them be who God made them to be, and letting them go where they're supposed to go in life.

There's always going to be something. I think there's always going to be these seasons of different things that grab our attention, that consume our lives, that consume our thoughts. God doesn't say don't care about those things. In fact, he's so kind and merciful toward us because he knows that we're going to love things on earth. He just says in Matthew, don't be anxious about your life, what you will eat, what you will drink, nor about your body, what you will put on. And he doesn't say because those things are shallow. He says, is not life more than food and the body more than clothing? Look at the birds of the air. They neither sow nor reap nor gather into barns. And yet the heavenly father feeds them. He says, I'm going to take care of you.

Don't worry about it.

One of my pastors gave this analogy recently. He said, imagine I get into the car with my buddy, and I realize I've forgotten my wallet. I tell him, hey, I forgot my wallet, and he says to me, don't worry about it. Then we're sitting over lunch, and at the end of the meal, he doesn't pay for me. I say, dude, what? What happened? You said don't worry about it. That is a given that you are going to take care of me.

And that is what God says over and over again. He says, don't worry about it. I am going to meet your needs. I'm going to take care of you. I'm going to take care of your kids. And that's my hope is, and the thing I tell myself when I worry about my kids. Now that I no longer can make sure they get to school on time, make sure they make good decisions. When I'm launching these kids into the world, this is the thought that comes to my mind: God's saying, don't worry about it. I have them. I love them more than I love the birds in the air. And the lilies in the field. I have them.

I want to talk about the difference in fear and anxiety because they are very close together. They're neighbor cousins, and anxiety is usually driven by what we're afraid of. So by definition:

I go and speak to women everywhere, and I'll often ask questions to the room, which is completely interesting. It's like constant polling, and you see women of all different ages and all different cities raising their hands across a room to answer.

Those two questions are the most unanimous in the room. So this is bondage for us women. I hate this one, and the reason I hate this one so much and I think God hates this one so much is because he is so clear throughout scripture to not fear. It shuts us down. What puts you on the back row? What makes you miss your life? What makes us miss the mission of God and the things that he has for us? It's fear. And anxiety is the expression of that fear stored up, and it keeps running wild in us. 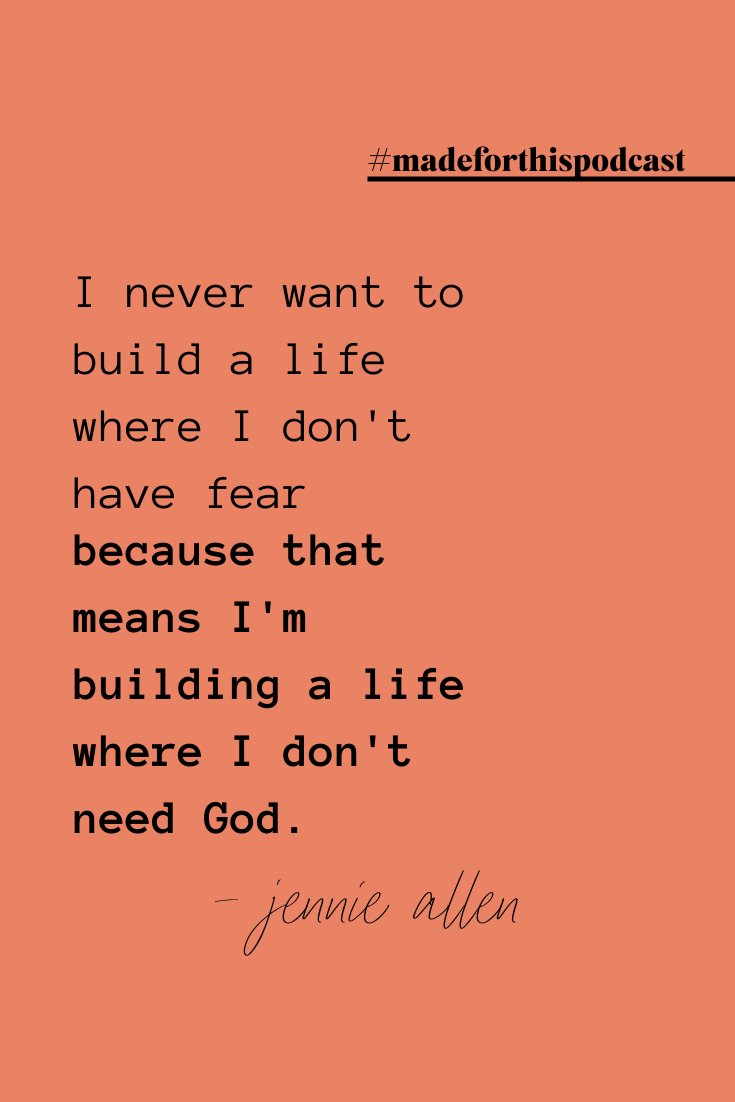 So how do we move forward? I know I talk about heaven a lot because I think that hope and that security of a future drives me. If I think about that girl that recorded that study all those years ago, I was so scared. But that was me saying, you know what? I'm not going to let this paralyze me. I'm not going to let my fear of man stop me from obeying God. And I look back at that now, and I'm braver. Now, what used to scare me doesn't scare me at all, but there are new fears. There are new challenges. There are new things that make me shake. And I never want to quit living that way. I never want to build a life where I don't have fear because that means I'm building a life where I don't need God. Fear is our beautiful reminder that we cannot do this on our own.

When I think of these emotions, sometimes they're small, but usually they're from big places. I know that some of you are facing death. Some of you are facing the possible death of your child. I know some of these fears are real. They're not pretend. And the only hope that is also real, that beats it, that overcomes it is God.

I want you to write what it is that's consuming your mind the most. What are you actually worried about? 2 Corinthians 10:5 says, take every thought captive to the obedience of Christ. And if we don't start to name those things we fear, how are we supposed to take them captive? How are we supposed to fight them? So write it down, name the things, and show it to a friend. That's my challenge for you today.