Is Forgiveness Possible, Relevant, or Necessary

Forgiveness. Is it possible, relevant, or necessary? The resounding answer is YES!

Yet all of us struggle with how to forgive and whether others can forgive us.

I’ve read a lot of books, listened to many sermons and songs, and yet I have found there is nothing easy about forgiving, especially if the pain is deep enough.

If we’re going to move towards forgiveness, we have to know what it is. I’ve heard many things about what forgiveness is, including:

But what resonates with me is, forgiveness is release.

Some of you may have heard the line spoken by Jesus that says, “Forgive, and you will be forgiven.”

A different way of saying that might be, “Release and you will be released.”

The word release gives me a better picture of how to forgive.

The other side of that would be:

To be forgiven or released is a relief to our souls. When I forgive or release, I am relieved of the burden I carry. I no longer seek vengeance.

The way we view forgiveness will vary from person to person.

The way you think and believe about forgiveness is greatly impacted by your upbringing. Your education, the things you learned along the way, and experiences are what drives the process.

Churches of any denomination teach us to believe it is necessary to forgive. This might even make you feel guilty for not immediately forgiving after being hurt.

Or, maybe you weren’t taught to forgive when you were a child, and at some point, you become an angry person and may not even know forgiveness is an option.

My husband, Jonas, wrote a book about forgiveness called Think No Evil. A professor who read his book commented, “Our students need to know that forgiveness is an option. They really don’t know there is an alternative to their anger.”

Spiritually, forgiveness is a command according to God’s word. However, our human nature resists the thought of forgiveness and argues that it can’t be done.

While it’s true it can’t be done with our effort alone, God would never ask us to do something impossible.

Forgiveness is a decision on your part but also supernatural.

Unforgiveness leads to anger and resentment, which can take us to a very dark ending.

Many years ago, I read an article that, at the time, I felt was a bit extreme. It was before I experienced my real-life hurt and anger. Now I fully understand the results of carrying bitterness and anger.

The article states:
Hurt leads to resentment
Resentment to bitterness
Bitterness to hatred
Hatred to rebellion
Rebellion to deception
Deception to perversion
Perversion to murder

It was during that same time when every news channel was covering the story about a mother who drove her car into a river drowning her two children. The story was shocking and unbelievable! How could any mother do this to her children? The article was suddenly more believable.

Jonas and I talked about this mother and what must have happened that led her to murder her two children.

She must have lived with the agonizing question, “Will the hurt ever go away?” She wasn’t able to release those who hurt her and, in the end, murdered her two children.

To write about this story today is a stark reminder of the desperation of my past. During my darkest years, I wanted to take my own life.

Growing up in a loving, faith-filled home and finding myself in such a dark place where I wanted to end it all was a very long path. I could never have imagined it.

My life became a downward spiral, and I could not find it in my heart to forgive those who hurt me.

You may have had similar feelings of darkness and despair, believing there is no way out. Or you may read this and say to yourself, “I can’t relate.” You may not be able to relate, but the truth is, you probably know someone who can relate and might be on the edge of a cliff ready to jump.

We have to remember – Forgiveness truly is an option!

It was a very long, slow process for me, but eventually, I was willing to forgive those who had hurt me.

I grew up knowing and believing in the power of forgiveness. I was taught about the forgiveness of a loving God, and I knew I was forgiven. That was good enough for me for a long time.

However, it was when I experienced forgiveness after my own life went into a spiral of darkness, that I began to believe more and more that forgiveness is a viable option and it gives life in place of death.

I asked myself many times, “What made me willing to forgive?”

My honest confession is that I was SO tired of being angry.

Not only was I angry at God, my abuser, and my husband, but being mad at myself was the ultimate betrayal.

I could no longer live with who I had become.

Maybe back then, I wasn’t sure forgiveness was possible, and I didn’t think it was relevant, but I KNEW beyond a shadow of a doubt it was NECESSARY for my well being.

I’m grateful for the teaching of forgiveness by my parents and my culture, which kept me from jumping off the cliff.

I’m going to continue sharing about forgiveness, but if you’re asking yourself, “Where do I begin?”, start with willingness. When we’re willing to forgive, we can discover there is LIFE on the other side of forgiveness.

With God and your willing heart, forgiveness is possible, relevant, and necessary. 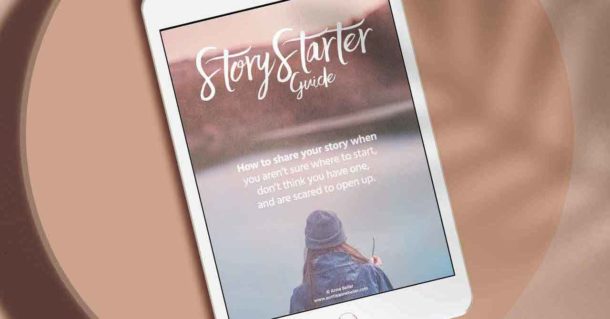 Don't let your past continue to keep you stuck in pain, blame, and shame. Grab this free guide from Anne Beiler and learn how to share your story when you aren't sure where to start, don't think you have one and are scared to open up.

Thanks! The StoryStarter guide will arrive in your inbox shortly.

You'll also be added to our mailing list and receive the latest blogs, news, and updates from Anne. We respect your privacy. Unsubscribe at any time.

Want Auntie Anne Beiler for your next event?

April 06, 2020
I’ve used a line many times in my personal and professional life. It is, “To overcome obstacles, one must overcome ...
Read more

How To Help Someone Stuck In Silence and Trauma

March 30, 2020
The issue of trauma and silence is not my expertise, but it is my experience. I have relied ...
Read more

What Causes People To Go Silent

March 23, 2020
How do you know your voice is silenced? What causes people to go silent? Think about the environment in your ...
Read more

How To Help Someone Stuck In Silence and Trauma

The issue of trauma and silence is not my expertise, but it is my experience. I have relied heavily on the experts to help and guide me through my challenges with this complex issue. With the help of learning through reading books on this topic, I continue to be inspired. Trauma is an ongoing epidemic in our world. Being traumatized is not only ...
Read More

What Causes People To Go Silent

The Dark Side of Silence

There is a dark side to silence that comes when being silent causes us to build strongholds. We think it will protect us. The longer we’re silent, the stronger the walls of defense and isolation. Dr. Dobbins says, “Satan builds his strongholds in the secrets of our lives and reinforces them by silence. When we break our silence, we break the str...
Read More

Understanding The Trauma of Silence

Understanding the Power of Silence

When I think of silence, I think of snow falling outside. This image perfectly describes the feeling of silence. There is something so peaceful about these moments. Everything seems so calm, and a hush falls over the area. Watching it snow always makes me stand in silence. Silence has so much to say, but you’ll never know if you don’t listen to ...
Read More

Can You Forgive Someone That Hurt You

It may come as a surprise to you, but most times, I don’t feel like forgiving. There have been a few horrible hurts, like the abuse inflicted on my children, that I’ve experienced, and I believed they were not forgivable. I agonized over what was taught to me, which was to forgive, but felt like I couldn’t. The hurt was too great. I wrestled wi...
Read More

The Importance of Forgiveness In Relationships

Is it Necessary to Forgive Yourself

Have you ever heard the verse, “Love your neighbor as yourself?” It’s not an easy challenge. What if I told you to “Forgive yourself as you forgive your neighbor.” Would you be able to do that? Sometimes, it’s easier to forgive others than it is to forgive ourselves. In my last blog, I wrote about forgiveness being, necessary, possible, and rele...
Read More

Is Forgiveness Possible, Relevant, or Necessary

Forgiveness. Is it possible, relevant, or necessary? The resounding answer is YES! Yet all of us struggle with how to forgive and whether others can forgive us. I’ve read a lot of books, listened to many sermons and songs, and yet I have found there is nothing easy about forgiving, especially if the pain is deep enough. Instead, we feel the need...
Read More