Article by Yolanda Putman; from TimesFreePress.com

Look them in the eye.

Don't teach to the chalkboard or the promethean board. Make eye contact with students to start developing a relationship with them and foster learning.

Developing eye contact is among an arsenal of weapons Clark gave to more than 780 teachers, nonprofit representatives and parents vowing to fight for the academic success of Chattanooga's children.

All are participants at the Hamilton County Department of Education's Innovation Zone summer institute.

The institute is a precursor to the launch of Chattanooga's Innovation Zone when school starts next month.

The goal is to improve five of the state's lowest-performing schools: Brainerd High School, Orchard Knob Elementary, Orchard Knob Middle, Dalewood Middle and Woodmore Elementary. They make up the iZone.

Strategies from a longer school day to higher pay to draw the best teachers will be used in an effort to help hundreds of students in the five schools improve.

Many of these students lag far behind achievement levels in other schools and often face poverty and other social obstacles as well.

Innovation Zone Director Le Andrea Ware said the school system chose Clark to speak because he exemplifies what it means to see barriers as opportunities.

"He's lived it," said Ware. "He has the results to show this can be done and it will be done."

"I wish I had a video of it," Bradford said. "There are so many good things I can glean from."

Bradford said she plans to look her students in the eye and tell them that she loves them.

But the main event was Clark.

LESSONS FOR TEACHERS FROM RON CLARK

1. Look students in the eye.

2. Create an atmosphere of love and joy.

3. Teach to the smartest child in the room, then do whatever it takes to motivate other students to reach that level.

4. Don't give awards to all students because they participate. Set a standard and give them the award when they reach it.

5. If you don't show kids love, you don't have the right to fuss at them.

6. Show appreciation for even the smallest contributions.

7. "Here is my biggest pet peeve. When I have an issue with a staff member, the last thing I want to hear is, 'Well in my defense ... 'I don't want to hear your defense. I want to hear, 'I got it. It won't happen again.'"

The New York Times best-selling author wrote The Essential 55, The Excellent 11 and The End of Molasses Classes, which detail his educational experiences and theories. He is founder of the Ron Clark Academy and was the 2000 Disney Teacher of the Year. He also was the subject of a 2006 made-for-TV movie, "The Ron Clark Story" that starred Matthew Perry.

Clark, 41, is a graduate of East Carolina University, through the North Carolina Teaching Fellows program.

Lesley Scearce, executive director of the nonprofit On Point, which helped fund Tuesday's event, introduced Clark and discussed the importance of caring for children.

"Kids will flourish and not fail," she said. "Every child deserves to be the sparkle in someone's eye."

Before Clark took the stage the song "Y'all Ready For This" banged through the speakers while teachers and parents stood, cheering and clapping. Then a video showing excerpts from Ron Clark Academy flashed on the screen.

"No F's in my class," Clark could be heard saying to a student in the presentation.

Afterward a nimble Clark leaped from the audience to the stage.

"I can feel the passion in this room," he said. "We're causing a revolution."

Part of Clark's experience included teaching 37 students in New York City's Harlem district. All had behavior problems and tested below grade level. But by the end of the school year, his class outscored some advanced placement students on standardized tests.

Every teacher, nonprofit representative and parent in the room vowed to help students in their school do better.

Everyone participating in the retreat had to walk on soft red carpet to enter the Brainerd BX meeting room where the rally was held.

Clark did body waves, sang rap songs and answered questions for more than an hour, emphasizing to educators and parents the importance of enthusiasm and being willing to reach outside of the norm to make learning fun.

"It's not just about books," he said. "It's about energy and excitement."

He told the audience how he sparked children to read literature by dressing up as a character in the book and joking with students while they studied. He taught velocity using double Dutch jump rope and he had students search for and execute math problems while wearing sunglasses as he played James Bond music.

These were fifth-grade math students who were testing below grade level when the class started, but by the time it ended, they were doing eighth-grade math.

Create an atmosphere of love and joy in schools, said Clark. When you have that, kids will be successful.

The day ended with "The Price Is Right" music playing as several teachers ran down the aisle to receive door prizes, food certificates and gift cards. Orchard Knob Middle School was the big winner of the day.

Five people from the school, an administrator and teachers, will visit and learn the teaching styles at Ron Clark Academy in Atlanta.

To Book Ron Clark for you next event to MOTIVATE and bring PASSION to your school go to: http://PremiereSpeakers.com/Ron_Clark.

December 10, 2019
With a focus on culture and communication, a rural Wisconsin ...
Read more

Limitless Classroom- Adam Dovico on the Beyond Speaking podcast 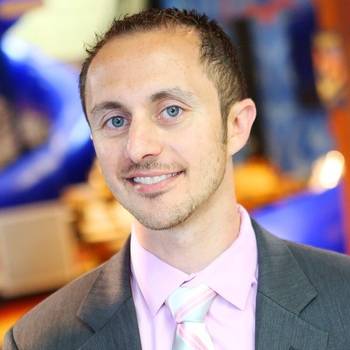 Teaching Through Struggles- Kim Bearden on the Beyond Speaking Podcast

August 13, 2019
In this episode of the Beyond Speaking podcast, best selling author ...
Read more

With a focus on culture and communication, a rural Wisconsin administrator has brought his 850-student district to national recognition. By Roger Riddell Originally published on Dec. 9, 2019 at Education Dive One of the nation's most exciting and charismatic superintendents leads a district of just 850 students in rural Wisconsi...
Read More

Limitless Classroom- Adam Dovico on the Beyond Speaking podcast

Teaching Through Struggles- Kim Bearden on the Beyond Speaking Podcast

In this episode of the Beyond Speaking podcast, best selling author and co-founder of the Ron Clark Academy, Kim Bearden shares how she handles personal struggles while teaching in the classroom, her journey of adopting her three sons from Soweto South Africa. and the importance of surroundingwith people who fill your soul. The guest host for...
Read More

Each year The John Maxwell Team looks to identify leaders who stand out in their community, their careers and in their daily lives. We are on a mission to recognize the people who go beyond themselves to make a positive impact in the lives of other people. SEE THE LIST!
Read More

EPISODE DESCRIPTION "I picture every organization like it's a bus. What really makes your organization successful is the people you hire. When you have great people on your team, the bus is going to fly.";-Ron Clark If building a positive team at your organization feels like a uphill battle, this week's podcast is for you. Ron Clark jo...
Read More

Podcast: How to Make a Living Speaking in the Education Market With Ryan Giffen

Kim Bearden honored by Mercedes-Benz USA as a #GreatnessLivesHere hero.

We are so privileged and proud to be working with such great speakers that make an impact all over the world. Congratulations to Kim!
Read More

The world is full of gifted educators and we get the opportunity to work with many of them. Spouses, family members, and coworkers see the result of their passion at work first-hand. Schools and communities are changed for the better because of their dedication. We witness the schools' and communities' excitement and enthusiasm as they gro...
Read More

We are honored to have been invited to attend and 'be awed' atThe Ron Clark Academy'sGrand Opening Galaof their brand neweducator training facility. Founded in 2007, this truly innovative school is the collaborative product of speakersRon Clarkand Kim Bearden's abiding passion for helping students excel beyond their dreams. The two met in 2...
Read More

We're excited to see some of our speakers named in INC Magazine's 10 Best Business Books for 2014. Read below for the entire list: Written by Geoffrey James Every year, I select 10books that, IMHO, provided the most value to their readers. Some of these may already be on your radar, but others you might have missed. Enjoy! 1. How to Be a P...
Read More