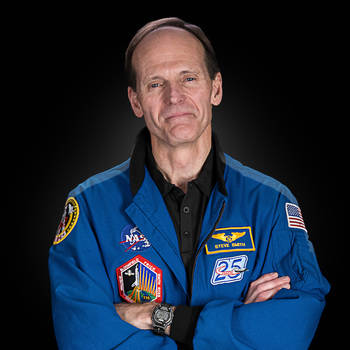 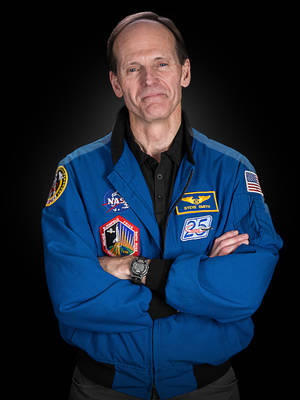 Steve Smith made an audacious childhood dream to be an astronaut come true despite multiple setbacks. He is one of America's most experienced astronauts with 4 spaceflights and 7 spacewalks to repair the Hubble Space Telescope and to build the Space Station. At the conclusion of his career he was the third most experienced spacewalker in history and he twice received NASA's highest honor, The Distinguished Service Medal.

Steve's path to space was long - three decades - and arduous. That path included a life-changing near-death experience as a youth, an MBA and two engineering degrees from Stanford, elite national athletics success, tenure as an IBM Product Manager, a medical rejection by the Air Force, four astronaut application rejections by NASA, and a medical rejection by NASA. He relentlessly pursued his childhood dream.

At NASA he was the first in his class named to a flight and quickly rose to the Deputy Chief Astronaut leadership position - the number two Corps' position - where he led the daily operations of the 125-member Astronaut Corps. He led multiple failure reviews, operations teams, and spacewalking crews. After his flight career, he served as a Diplomat living overseas for a decade and conducted NASA negotiations with European and Russian space agencies.

Steve now uses his one-of-a-kind mix of experiences to serve as a board director, venture capital advisor, and keynote speaker. He credits hard-won lessons learned and a resulting set of principles, which he calls the "explorer's mindset," for giving him the creativity, will, and grit to achieve his goal and succeed as an astronaut, decision maker, and leader. In his speeches he shares the magic of spaceflight and motivates audiences to use the explorer's mindset and practices to improve individual, team, and leadership performance in today's dynamic, fast-paced business environment.