Olympic luger Ruben Gonzalez was recently the subject of a CNN.com profile that highlighted his incredible career both on and off the track.

Ruben Gonzalez, 47, made history in Vancouver by becoming the first person to compete in four Winter Olympics in four different decades.

It's a feat made even more remarkable considering that -- by his own admission -- Gonzalez is no natural athlete. In fact, he says he was terrified of the luge until two years ago.

His story is one of succeeding through willpower alone, and as a professional keynote speaker and author of books including "Becoming Unstoppable," Gonzalez says he wants to inspire others to be high achievers. 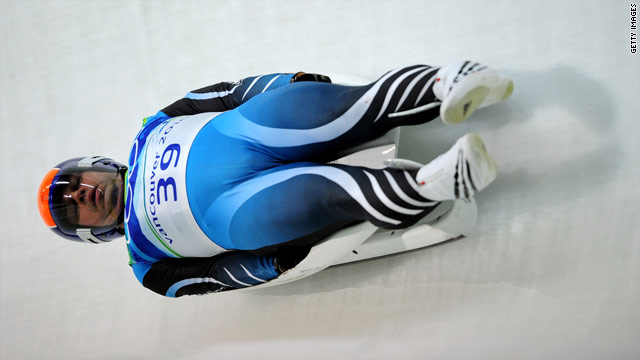 Born in Argentina, Gonzalez moved to the Unites States as a child. "When I was a kid I wanted to be in the Olympics, but I'm not a super athlete and I was always the last kid to get picked for sports so it was just a pipe dream," he told CNN.

After watching the 1984 Sarajevo games on TV, Gonzalez became determined to turn his Olympic dream into reality. All he had to do was find the right event.

“My strength is not athleticism, it's perseverance, so I thought I've got to find a sport with a lot of broken bones, a lot of crashes. Maybe there will be a lot of quitters and I just won't quit -- and that's why I picked the luge," he said.

He contacted the U.S. Luge Association and was told he should have started 10 years earlier. Undeterred, Gonzalez took up one of the world's most dangerous sports at the age of 21 and managed to qualify for the 1988 Calgary Games. But he says his success was more to do with courage than ability.

"No matter what your goal is, whether it's to become salesman of the year or to double your company's revenue, you need two types of courage -- the courage to get started and the courage to endure," he told CNN.

"For 20 years I didn't like the luge. My knuckles were white coming down the track I was so scared. But I did it in spite of the fear because that was my only chance to make my Olympic dream come true."

When it comes to being a high achiever, Gonzalez told CNN that changing your focus can change your performance.

He said his own breakthrough came when his coach told him he needed to stop focusing on speed and start looking at what needed to be done every section of every curve of the track.

Ruben Gonzalez is available to bring his unbelievable story to your next event. For info on booking him, please submit the "Check Availability" form at PremiereSpeakers.com/Ruben_Gonzalez.

Want Ruben Gonzalez for your next event?

Staying Positive by Focusing on the Possibilities

What's Holding You Back?

December 15, 2015
Whether your dream is to lose weight, or to buy your dream home, or to double your income, or to learn the ins and ...
Read more

Feedback, The Breakfast of Champions

July 28, 2015
Here is a simple thing you can start doing right now to help you improve your relationships, your ...
Read more

Staying Positive by Focusing on the Possibilities

Whether I'm speaking for 25 people in a boardroom or 10,000 people in an arena, I finish my speeches by saying, "What are the chances that someonelike me was going to make it to the Olympics?I wasn't a great athlete, I didn't get started untilI was 21 years old, and to top it off I live in hot andhumid Houston and I chose to compete in the lugef...
Read More

What's Holding You Back?

Whether your dream is to lose weight, or to buy your dream home, or to double your income, or to learn the ins and outs of soccer so you cancoach your daughter's soccer team, you willfind that there are things that hold you back. Ninety five percent of people, look at theirobstacles and all they see is a reason whythey can't make their dream a ...
Read More

Feedback, The Breakfast of Champions

Here is a simple thing you can start doing right now to help you improve your relationships, your results at work, the quality of your products, and anything else in your life. Something that doesn't take much time, but saves you huge amounts of time. That something is asking for feedback from qualified people. At the end of each luge run, ...
Read More

The Power of Being Flexible

We live in times of constant and rapid change. Because of this, one of the most important qualities you can develop to succeed in the 21st century is the quality of flexibility. Flexibility means approaching life's circumstances with an open mind ever ready to make course changes. The opposite of flexibility is rigidity andhard-headedness. Th...
Read More

Developing Your Vision to Succeed

All great leaders have two main qualities: gutsand vision. Today we'll focus on vision. You become what you think about all the time.Leaders think about the future most of the time.They think about where they are going and aboutwhat they can do to get there. Non-leaders focus on the present, on the past,and on their obstacles. When you start ...
Read More

It takes a special person to be a leader.

Leadership, whether in a family, in a little league team, or in an organization, requires the same factors. First of all, you have to have the mindset that you want to help people reach their full potential. The leader constantly teaches the people in his team how they can become more successful by contributing to the team's common goals. T...
Read More

Decide You Were Created for Greatness

Great people were not born great. Theybecame great by making a decision topursue their dream in life and by refusingto give up. The struggle we must all face on the road to our dreams is what makesus great. Ordinary people can become extraordinary if they consistently andpersistently follow the principles of success. Step one to success is real...
Read More

As you set goals and beginworking towards them, it is critical that youestablish benchmarks you can use to evaluateyour progress. The more specific your measuresare, the faster you'll reach your goals becauseyou'll reduce wasted time. Going back to the example of the pilot flyingcross country to New York, the more frequentlyhe checked his true ...
Read More

Your Focus Determines Your Results

I started luging in 1984. But, for 24 years,I didn't even like the sport. I forced myselfto slide because the luge was my ticket tothe Olympics. The Olympic dream is whatkept me going, and the dream was always in focus. Whenever I was at the start tower preparing toslide, my heart hammered in my chest, mymouth became starched and dry, and my ha...
Read More

How to Have The Courage to Succeed

No matter what your dream is, whether it's to bethe best Dad or the best Mom, the best husbandor the best wife, the best employee or the bestboss, the best salesperson or the best student youcan be, to make it a reality, you will have to havethe courage to act in spite of your fears.High achievement requires courage, self-confidence,boldness, an...
Read More