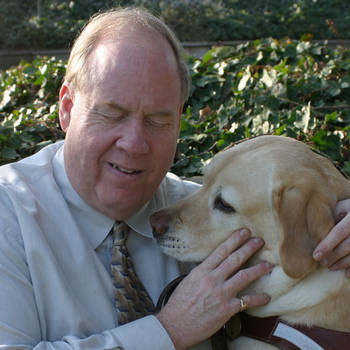 When Michael Hingson was a student at the University of Califorina, Irvine, one of his professors didn’t believe he would succeed.

The professor wrote that Hingson, who is blind, would probably never be able to absorb the materials necessary to get an advanced degree in physics because he couldn’t see.

Hingson, who now has a master’s degree in physics, told that story to the group of first year students gathered Tuesday at Ohio State University-Newark’s convocation to emphasize the importance of having an open mind.

“We come into the world with a lot of different prejudices,” he said. “It doesn’t matter if it’s blindness or anything else. We need to be open to learning different things. That’s what college is all about.”

The convocation is held every year during the campus’ welcome week to introduce new students to campus. OSU-Newark has about 1,200 freshmen starting classes this semester, but many of the students who attended Tuesday’s event live in the school’s residence hall, said public relations specialist Francesca Amigo.

After several introductions, Hingson and his guide dog, Africa, took the stage. He spoke to students about the importance of teamwork and coping with the unexpected.

On the day of the terrorist attacks, Hingson was working as a regional sales manager in his office on the 78th floor of the first tower of the World Trade Center.

When the first plane hit the building, he heard a muffled explosion and felt the building shift. But his first instinct wasn’t to panic.

Hingson had familiarized himself with the building, just in case there was ever an emergency. And he noticed Roselle, his guide dog at the time, wasn’t scared.

“I knew my partner wasn’t giving any indication that she was afraid,” he said. “So I was able to focus.”

They walked down the stairs and out of the World Trade Center where law enforcement officers directed them away from the building.

Although Roselle kept Hingson from falling down stairs or walking into obstacles, she relied on him to tell her where to go.

“The dog’s job is to make sure I travel safely,” he said. “She’ll walk until she can’t walk any more. Her job isn’t to know where I want to go.”

Hingson and Roselle were still walking when the second World Trade Center building fell. Although they were pelted with debris and dust, they were able to find shelter in a building.

They ducked into another building when the first building fell.

“In the blink of an eye, the World Trade Center was destroyed,” he said. “We had gone in there three hours before.”
Hingson said his ability to work together with Roselle and the people around them is probably what kept him alive.
“It wasn’t the dog, it wasn’t me, it was both of us,” he said.

Hingson decided to share his experience with others to promote inclusion and teamwork to overcome obstacles.
He told the students they will all face life changing situations in their lives. But he encouraged them to use those experiences to learn and be open to new ideas and solutions.

During Sept. 11, people came together and made a difference. But over the years, people have let differences prevent them from collaborating and embracing new ideas, he said.

He encouraged students to have an open mind throughout their time at OSU-N.

“Things happened that took it away,” he said. “I hope people will go back to that.”

For information on how to book Michael Hingson for your next event, visit premierespeakers.com/michael_hingson.

Want Michael Hingson for your next event?

August 26, 2013
Written by Anna JeffriesWhen Michael Hingson was a student at the ...
Read more

Written by Anna JeffriesWhen Michael Hingson was a student at the University of Califorina, Irvine, one of his professors didn't believe he would succeed. The professor wrote that Hingson, who is blind, would probably never be able to absorb the materials necessary to get an advanced degree in physics because he couldn't see. Hingson, who now ...
Read More