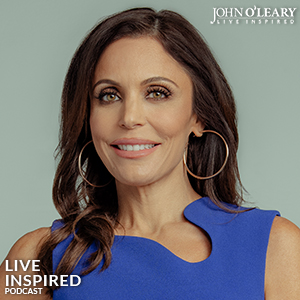 Bethenny Frankel is the Founder & CEO of Skinnygirl, a lifestyle brand offering practical solutions to everyday problems, which has grown from sensible, low-calorie cocktails into a branding empire that including clothing, vitamins, skincare and more. In addition to her long-standing role on Bravo's Real Housewives of New York, Bethenny has been a guest shark on ABC’s critically-acclaimed series Shark Tank, and runner-up in The Apprentice: Martha Stewart in 2005.

Today, Bethenny is focused on raising her young daughter and establishing her worldwide disaster relief initiative BStrong. This program provides much-needed real-time relief to disaster-stricken areas across the United States and beyond. While assessing and delivering supplies to the Australian bushfire crisis, her team has continued their support in Puerto Rico, which has been named one of the largest privately-run humanitarian efforts in US history.

Bethenny shares how she balances motherhood, her Skinnygirl empire, the critical impact her philanthropy is providing worldwide and will ignite the question, “what more can I do?”

If you enjoyed learning from a female entrepreneur, you’ll love my conversation with Dina Dwyer-Owens. Dina shares a three-part focus that has led to an incredibly successful business + inspired life. Listen to Dina Dwyer-Owens on ep. 49.

1. What is the best book you've ever read? Steve Jobs by Walter Isaacson, Kane and Abel by Jeffrey Archer, Bright, Precious Days by Jay McInerney, The Power of Now by Eckhart Tolle, and by Rhonda Byrne.

2. What is a characteristic or trait that you possessed as a child that you wish you still exhibited today? Not worrying so much.

3. Your house is on fire, all living things and people are out. You have the opportunity to run in and grab one item. What would it be? A tray of watches because they all have different memories from different times in my life, and my pictures are on my phone.

4. You are sitting on a bench overlooking a gorgeous beach. You have the opportunity to have a long conversation with anyone living or dead. Who would it be? Mark Zuckerberg and I’d ask, “How did you have the courage at a young age to turn down a billion dollars for your brand?”

6. What advice would you give your 20-year-old self? I need to find a way to make her understand to absolutely not worry at all about relationships and just have fun.

7. It's been said that all great people can have their lives summed up in one sentence. How do you want yours to read? I only sweat the small stuff.

Pre-order your copy of IN AWE today to receive access to fun, interactive bonus features emailed to you in the lead-up to the book's release! Visit ReadInAwe.com.