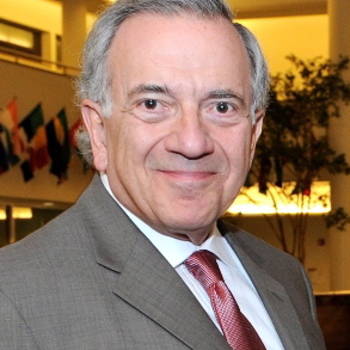 Seventeen years ago, Harry Leibowitz was watching a story about the Pulitzer Prize honorees on television when he had an epiphany. “I wonder if there’s a prize for people who take care of children?” he mused. There was none then. There is now, thanks to Leibowitz who in 1997 founded the World of Children Award. Its mission is “to improve the lives of vulnerable children by funding and elevating the most effective change makers for children worldwide.”

Leibowitz and his wife Kay Isaacson-Leibowitz, both retired top executives (he with Proctor & Gamble, she with Banana Republic and Victoria’s Secret) are now devoting their lives to a shared passion: recognizing and supporting the efforts of extraordinary individuals who have proven programs to help children in need.

Since 1998, the World of Children Award has given $6 million in cash grants and support to more than 100 honorees who are the driving forces behind programs that range from fighting malnutrition in Malawi to providing rehabilitation for disabled children in Nepal.

Next month, the couple will host the 2014 honorees at a gala in New York City where they expect to raise more than $1 million. On November 15, Project Concern International will honor them with its 2014 Humanitarian Award at the Hands Across Borders Gala at the San Diego Port Pavilion. It won’t be the first award for this accomplished couple. Named one of America’s top five inspiring power couples by The Huffington Post, they were in good company, sharing honors with such high profile philanthropists as Bill and Melinda Gates.

While they travel frequently to visit honorees and to see programs in action firsthand, the Leibowitzes call Rancho Santa Fe home. Their Spanish-Mediterranean-style house in The Bridges is filled with mementos from their travels. Shiny, hand-hewn copper pots from Italy hang from a pot rack in the kitchen; Inuit soapstone carvings are on display in the hallway; vintage maps adorn the walls in Harry’s office.

Their life is also a world away from Harry’s humble beginnings on New York’s Coney Island. Adopted as an infant, his family of six shared a one-bedroom bungalow once used by the wealthy as a seaside-changing cottage. The Leibowitzes also shared a single bathroom with nine other families. His father was a longshoreman and later, a truck driver; his mother worked nights in a laundry, pressing sheets for hotels. When his father died in his sleep at the age of 46, and the family’s furniture was repossessed, Harry got a job in a neighborhood bakery. He got more hours by working the 12:30-6:30am shift, when the police weren’t around to enforce child labor laws. Despite the family’s poverty, his grandmother taught Harry and his sister to give back, insisting they put a penny in a little tin box, designated for charity, every night.

“We didn’t have a lot of food to eat. But no matter what, we always had to put a penny in that little box. And when it was full, grandma would take us by the hand, walk us to the local synagogue, and we had to deliver the box. [I] never forgot that.”

Harry put himself through college, and went on to become a successful businessman whose travels around the world gave him a taste of the plight of children in developing countries.

Chandeliers seem to crown the dining room, a favorite spot for entertaining

Many years later, he would find his match in Kay Isaacson, the daughter of General Clayton “Ike” Isaacson, a famous World War II fighter pilot and ace. Her father’s assignments took the family to Taiwan and Ethiopia where she, too, learned about the difficulties of families in other parts of the world. And, also like Harry, she came from a tradition of philanthropy. Her mother (now 91 and a Carlsbad resident) was a frequent volunteer while also raising five children.

Kay had a 40-year career in the fashion industry, serving as a senior executive at leading brands. She continues to serve on the board of Guess — one of only a handful of women to serve on corporate boards. She is also involved with the opening of the “Road to Berlin,” a new gallery at the World War II Museum in New Orleans.

So how and where did this dynamic couple meet — at a power breakfast in New York City or on safari in Africa? The truth is far closer to home — through their massage therapist in Columbus, Ohio, where they both worked. The therapist had a hunch the well-traveled executives would have much in common.

“We’re so fortunate that we had wonderful careers independently, and that, this second half of our life, we are able to dedicate to giving back to others. It just doesn’t get any better than this.” (www.worldofchildren.org)      ANDREA NAVERSEN

A vanishing-edge pool is the focal point of the patio

Want Harry Leibowitz for your next event?

March 29, 2018
At Home With the Leibowitzes Seventeen years ago, Harry Leibowitz was watching a story about the Pulitzer ...
Read more

A Sad Day for Children

January 17, 2018
Yesterday was another terrible day for children. The Pakistani Taliban murdered 132 school children in their ...
Read more

At Home With the Leibowitzes Seventeen years ago, Harry Leibowitz was watching a story about the Pulitzer Prize honorees on television when he had an epiphany. "I wonder if there's a prize for people who take care of children?"; he mused. There was none then. There is now, thanks to Leibowitz who in 1997 founded the World of Children Awar...
Read More

A Sad Day for Children

Yesterday was another terrible day for children. The Pakistani Taliban murdered 132 school children in their classrooms and dozens more were injured, some of whom will not survive this massacre. I am so very impressed by the bravery of these people... imagine the courage it took for some heavily armed grown men to barge into a school and...
Read More