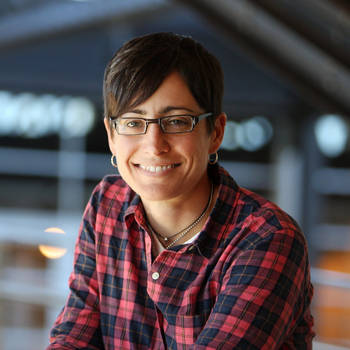 Danielle Feinberg is a Supervising Technical Director at Pixar Animation Studios. Feinberg began her career at Pixar in 1997, after receiving her BA in computer science from Harvard University. Her first position was on the movie A Bug's Life as a render wrangler, an entry-level, problem-solving position, and she soon was leading the otherwise all-male department. Feinberg got her first taste of lighting during this time and fell in love with creating the final image for the film. She went on to light many of Pixar's films, including Toy Story 2, Monsters, Inc., the Oscar-winning Finding Nemo, and The Incredibles. Another Oscar winner, Wall E, was Feinberg's first movie directing the lighting in her role as Director of Photography. It was heaven for someone whose greatest inspiration is using technology to make art. She went on to oversee the lighting on two more Oscar-winning films, Brave (featuring Pixar's first film with a girl as the main character) and Coco. Feinberg is currently working on a future Pixar film, where she has taken on the role of Supervising Technical Director. She is the first woman in 20 years to hold this position and will get to use both her technical chops and her aesthetic skills, to help push the film to new places.

Feinberg has given talks about the challenges of making Pixar's film in various cities across Europe, Asia, Central America, and the United States. She also gives talks to girls of all ages, encouraging them to pursue code, math and science by demonstrating to them the magic found in combining art and technology to create movies. In 2016, she was able to bring that message to a broader audience with her TED talk that was part of the PBS "Science and Wonder" presentation for TED Talks Live. It was named one of the top TED talks of 2016.