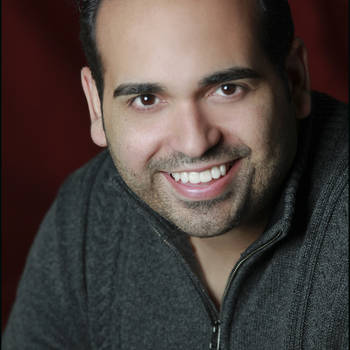 Played Javier Martinez in "Courageous" and Marco in "Mom's Night Out"

Robert Amaya was everything one would expect from Javier Martinez.
Light on the humor and heavy on the “Courageous” message, Amaya traveled  from Miami to appear at the Coldwater First Baptist Church (FBC) for two services last Sunday morning, with the actor from the popular movie talking responsible fatherhood and of the need for men to be biblical.
The character Martinez provided some comic relief in the film about law enforcement fathers who deal with challenges on the street but must learn to deal with challenges at home.
But “Javy” also provided an example of determination to work to provide for his family, an example to his children of a loving husband, and a striking example of how important it is to do the right thing, no matter the cost.
The movie ran for the month of October at NCG Cinemas.
Amaya, in Coldwater courtesy of the effort of Bill Carlson, who along with wife Pat of the Lamp Post Christian Bookstore worked hard to bring the movie to town, spoke not only to men, but to the importance of Godly mothers and their support for their husbands.
He spoke to young women: “Young ladies, if your young man does not know John 3:16, run. Run while you can.”
He said it is important to teach sons to respect women, and it is important to teach daughters to respect their bodies, all while worldly influences are loudly sending wrong messages.
“If the greatest influence on your child is not you, you are not parenting,” Amaya said.
He cited statistics, in the movie and which have been printed here, that show the devastation of the lack of fatherhood.
“We’re having a male identity crisis. There are fewer fathers committed to the welfare of their wives and their children,” he said. “We have a generation of cowards producing a generation of sloths. We have generational laziness and immaturity.”
Work is one aspect of biblical manhood, said Amaya, and a man who does not work when he is capable of it disqualifies the legitimacy of his existence.
“A man who is able to work and doesn’t provide is worse than an unbeliever,” he said, and a very important way a man can be regarded as biblical is that he obeys the word of God.
“Where are these biblical men? They’re becoming more and more rare,” Amaya said. “With the movie, we’re looking for those who have abandoned their posts, and avoided their responsibilities. There are fathers who have become apathetic toward children. Absentee fatherhood is a big problem, but just having the presence of a body is not going to be sufficient.”
Of children, he said it is important not to provoke them, as it says in Ephesians, and “You can’t control them, but you can guide them.”
Amaya said parents need to be engaged in their lives without being legalistic, and “Everything we do must be through the expression of love,” including celebrating their wise decisions.
“Hug your sons, hug your daughters, hug your wives. Let them know the pleasure they bring to your life,” he said, and don’t rely on words.
“The most important example a father can give is that of a Christian life, continually demonstrating a Godly walk,” said Amaya. “It is so important to maintain a visible relationship with God, so our children learn to value it.”
He had asked how many of the 300 in the sanctuary for the second service had seen “Courageous,” and it appeared every hand was raised.
“I know what some of you are thinking – ‘I thought we invited the funny guy.’ It is not a laughing matter. It’s a very serious problem we have in this country, in this world,” Amaya said. “But it’s through the Gospel and through the men of God that changes are going to happen.”
As he closed, he said, “Guys, listen to your biblical calling. The future of your children, your grandchildren and their children depend on it greatly.”

Hear entire talk
Amaya’s entire message at the FBC last Sunday can be accessed at the fbcofcoldwater.org website, click on media, click on sermons. More information on the movie is at providentfilms.org/courageous, and the highly recommended novelization of the film by Randy Alcorn, along with “The Resolution” and other related “Courageous” materials, is available at the Lamp Post Christian Bookstore in downtown Coldwater, phone 517-278-6575.

For information on how to book Carol Kinsey Goman for your next event, visit PremiereSpeakers.com/Christian/Robert_Amaya.

Want Robert Amaya for your next event?

December 07, 2011
Article from TheDailyReporter.com (Coldwater, MI) Robert Amaya was everything one would ...
Read more

Article from TheDailyReporter.com (Coldwater, MI) Robert Amaya was everything one would expect from Javier Martinez. Light on the humor and heavy on the "Courageous"; message, Amaya traveled from Miami to appear at the Coldwater First Baptist Church (FBC) for two services last Sunday morning, with the actor from the popular movie talking respon...
Read More