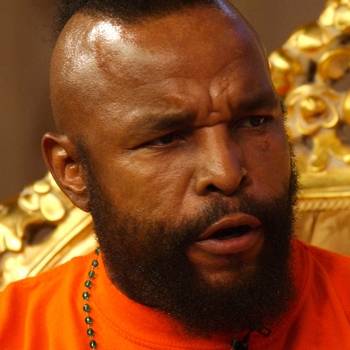 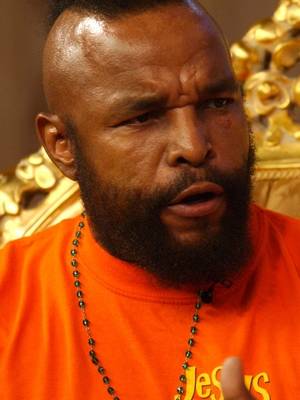 Mr. T came from Chicago, Illinois, and was the eleventh of twelve children; he and his four sisters and seven brothers grew up in the city's housing projects. He played football, studied martial arts, and won a scholarship to Prairie View A&M University, Texas, but was thrown out after a year. After that he went to a couple of small Chicago colleges on athletic scholarships. After leaving college he was a Military Policeman in the U.S. Army before trying out for the Green Bay Packers. His professional football career was finished, however, by a knee injury.

For about ten years he was a bodyguard to the stars, protecting such well-known personalities as Muhammad Ali, Michael Jackson, Lee and Diana Ross. He charged around $3,000 a day and his business card famously read, "Next to God, there is no better protector than I." He always boasts that he never lost a client, saying, "I got hurt worse growing up in the ghetto than working as a bodyguard."

In 1970 he changed his name by deed poll from "Lawrence Tureaud" to "Lawrence Tero" and then in 1980 to "Mr. T" so that people would have to address him as "Mr." It was while reading National Geographic that Mr. T first saw the unusual hairstyle for which he is now famous, on an African Mandinka warrior. He decided that adopting the style was a powerful statement about his African origins.

During his stint as a doorman, he would take jewelry from disorderly people and wear them himself as a testament to how well he performed his job as a bouncer. At one point, his gold chains, rings, and bracelets were worth about $300,000.

In 2005, Mr. T announced he would never wear his chains again saying, "No, T, you can never wear your gold again. It's an insult to God." He came to this decision after seeing the effects of Hurricane Katrina. Mr. T also donated a great deal of clothing and money to Katrina victims. On October, 2006 [1] his new reality television show for TV Land, called I Pity the Fool [2] begins, which will find the devout Christian assisting those in need.

Mr. T currently lives in Sherman Oaks, California, and is single. He is a born again Christian.