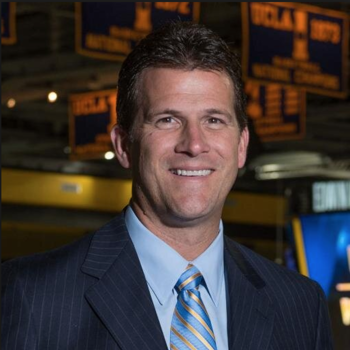 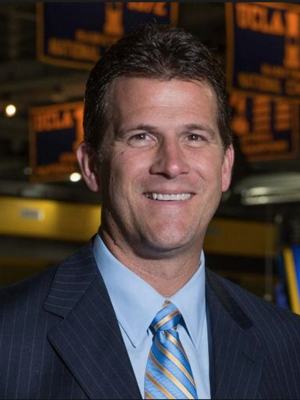 Steve Alford is the former head coach of the UCLA Bruins, a national champion as a player with Indiana University, and an Olympian in the 1984 Los Angeles Olympics. He began public speaking at age 16 and enjoys helping audiences learn the keys to success through leadership, teamwork, and perseverance.

During his first two seasons in Westwood, Alford led UCLA to back-to-back Sweet 16 appearances and the 2014 Pac-12 Tournament title. In his first year as UCLA's head coach (2013-14), he guided the Bruins to the Sweet 16 and helped UCLA secure its first Pac-12 Tournament title since 2008. Additionally, the Bruins produced three first-round NBA draft selections for the second time in school history (also occurred in 1979).

Alford has recorded more NCAA victories (559) as a collegiate head coach, age 52 or younger, than any other head coach in the nation. Alford, who turned 52 on Nov. 23, 2016, began his collegiate coaching career at the age of 26 at Manchester College.

A native of New Castle, Ind., Alford was a prep standout for his father, Sam Alford, at New Castle Chrysler High School. He earned Indiana's Mr. Basketball Award in 1983 after averaging 37.7 points per game as a senior.

During his collegiate career at Indiana, Alford started 120 of 125 games, helping the Hoosiers compile a 92-35 record over four seasons. Playing under head coach Bob Knight, Alford served as team captain in 1987 when Indiana went 30-4 and won the NCAA Championship.

Alford concluded his college career as Indiana's all-time scoring leader with 2,438 points (that mark was eclipsed by Calbert Cheaney in 1992-93). He became the first player to win the Indiana MVP four times and led the Hoosiers in scoring all four years. He finished his career as Indiana's all-time leader in steals (178 steals, now ranks second) and three-point field goal percentage (53.0 percent). Alford was a consensus first-team All-America selection and the Big Ten Conference's MVP as a senior (1987).

In 1997, Alford was inducted into the Indiana University Athletics Hall of Fame, and in 2001 he was one of 15 players selected to Indiana's All-Century Team. He was one of five players named to ESPN's Big Ten Conference Silver Anniversary Team in 2004. In the Legends of College Basketball by Sporting News, Alford was No. 35 on the list of the 100 greatest NCAA Division I college basketball players.

Following his freshman season at Indiana, Alford was selected to play for the United States basketball team at the 1984 Olympic Games in Los Angeles.

Alford earned a bachelor's degree in business from Indiana University. He is married to the former Tanya Frost, whom he has known since the two were schoolmates in grade school in New Castle, Ind. The Alfords have three children - Kory, Bryce and Kayla. Kory graduated from UCLA in 2015 and Bryce, from UCLA in 2017.