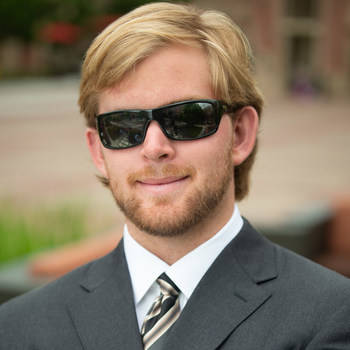 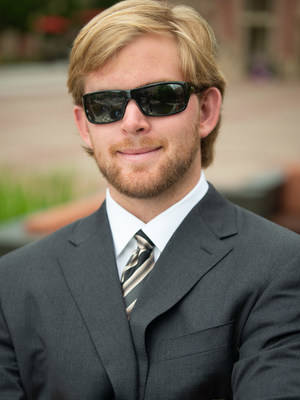 Jake Olson is 21 years old, a resident of Huntington Beach, California and is attending USC as a senior. When Jake was 8 months old, he was diagnosed with a rare form of eye cancer, retinoblastoma. The disease claimed his left eye before the tender age of one and in November 2009 Jake lost his right eye after battling the cancer for 12 years. Jake confronted many
challenges during his battle and has used his experience to better himself as a person and develop a strong faith in God. Jake wrote a book when he was 8 years old to uplift and encourage other children who were battling cancer and other diseases. Jake has shared his book and faith with countless others, including both adults and children that have been touched by his story. Jake has also just published his second book, "Open Your Eyes", which was released January 2014. He has a wholesomeness to his heart and spirit for life beyond his years. Jake is also a life-long University of Southern California football fan. He had the opportunity to meet the entire coaching staff and team as well as spend precious moments with the team leading up to his surgery and the weeks that followed. Meeting Coach Carroll and the team was a special experience for both Jake and the Trojans. These relationships assisted Jake beyond measure during some of his most trying times and some of these relationships have grown into special friendships - especially with Coach Carroll. Jake attended the Super Bowl last year and spent some precious moments with Coach Carroll leading up to the big game. During the Trojan season in 2009 and leading up to Jake's surgery, ESPN's Shelly Smith captured his story alongside the Trojans, his battle with cancer and his courage in a short documentary. This piece has been aired on ESPN, Good Morning America; ABC's Evening News and won an ESPY award. Jake was also a guest commentator on ESPN's College Game Day show for the January 1, 2010 New Years' Day show. In October 2011, Jake and his emerging golf game were featured on Fox's "Live Life & Win." Jake was also featured on The Katie Couric Show called "Miracles", the Home and Family show on Hallmark, Fox and Friends and CBS nightly news. With Jake's recent fame, he has had the opportunity to share his book and speak about his experiences and faith in front of corporations, schools, service organizations and congregations. In January 2010 and 2014, Jake was a showcased speaker, alongside legendary coach Bobby Bowden, for the Fellowship of Christian Athletes National Event held in Irvine, California. Jake was also a keynote speaker at Dick Vitale's 5th Annual V Foundation for Cancer Research Event held in Sarasota, Florida and has had several opportunities to speak for the benefit of The American Cancer Society. Jake has been in front of corporations and service organizations with audience sizes in excess of 10,000 guests. Jake recognizes he has received much, and wants to give back more. In this spirit, Jake setup his own foundation - Out-of-Sight Faith - in order to raise needed funds to purchase technology for other blind children. This equipment and technology enable visually impaired children to perform better in school and achieve academic excellence. The foundation also supports cancer research and has raised over $100,000 dollars. Jake is also an honorary member of two other non-profit boards: 1) Tee off for Dogs which sponsors guide dogs for the visually impaired, and 2) Cancer Research & Know-the-Glow campaign in connection with the Vision Center at Children's Hospital Los Angeles. Jake also recently joined the President's Council on Sports, Fitness, and Nutrition. Jake played football and golf in high school and is currently on the USC football team as one of the long snappers. During USC's game against Western Michigan on September 2nd , 2017, Jake made history as the first one hundred percent blind player to snap in a college football game. It was a dream come true for Jake, and his story inspired millions of people all across the county. On top of football, he also enjoys skiing, surfing and playing the guitar. Jake has set a personal goal to become the first blind golfer to join the PGA golf tour. Jake's love for and dedication to the game of golf caught the attention of TravisMathew golf clothing company. Jake and Travis Mathew have teamed up to develop a first of its kind "Braille" golf shirt, with messages scripted in Braille on shirts that offer golfers a smart, progressive look with a sizeable portion of the proceeds from every shirt sold going to Jake's favorite charities. Jake loves to help and serve others. Jake is not afraid to challenge himself or challenge others and has personally raised his expectations for his own life. Jake's faith and attitude have been an inspiration to others and his belief in making the most out of life continues to motivate those around him.

Jake can be followed at OpenYourEyes.Org